Out & About: Top 10 things to do this week is Israel

The Argentinean dance troupe Pasiones and its choreographers Erica Boaglio and Adrián Aragón return to Israel as part of their world tour. 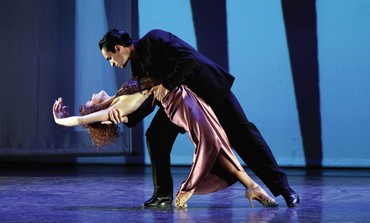 1. GRAND CAST AT A GRAND HOTEL The comedy-drama The Grand Budapest Hotel recounts the adventures of Gustave H., a legendary concierge at a famous European hotel between the wars, and the lobby boy who becomes his most trusted friend. The story involves the theft of a priceless painting and the battle for an enormous family fortune, against the backdrop of a dramatically changing continent. The star-studded cast includes Ralph Fiennes, F. Murray Abraham, Adrien Brody, Willem Dafoe, Jeff Goldblum, Jude Law, Harvey Keitel, Bill Murray, Edward Norton, Tilda Swinton and Owen Wilson.

2. THE MAIN EVENT There are plenty of Purim happenings around the country, but a major event is the annual Holon Purim parade – the Adloyada. This year, the theme is Latin Carnival, with hordes of performances, such as 4,500 dancers, acrobats and pyrotechnics, marching bands and street theater. Get there early so you don’t miss the fun.Sunday at noon in Holon.3. PARTY AT THE ISRAEL MUSEUM! Kids and grown-ups are invited to celebrate Purim at the Israel Museum, featuring art workshops for creating costumes, Purim-style story time, a festive fashion show and costume contest, a musical performance by Chen Zimbalista and friends and more.Monday, 10 a.m. to 3 p.m. at the Israel Museum, Jerusalem. Free for children under 17. Adults free with museum admission.

4. THE PANAMA BEAT Grammy Awardwinning Latin jazz pianist Danilo Perez returns to Israel next week with his new quartet and show Danilo Perez Panama 500, featuring Adam Cruz, Ben Street and Roni Eytan.March 20 at Zappa Club Jerusalem; March 21 at Zappa Club Tel Aviv; and March 22 at Zappa Herzliya. For tickets, call *9080 or go to www.zappa-club.co.il.5. TRADITION FROM TEHRAN Ensemble Golha will present authentic Jewish- Persian music next week in Holon. The concert will also feature a talk by David Nissan, who will take the audience on a virtual tour of Iran. The ensemble’s members perform on traditional Persian instruments. (Pictured Menashe Sasson.) March 22 at 9 p.m. at Steinberg Hall in Holon For tickets, call 054-667-3020.6. FROM TURKEY WITH AWE A new music series at Confederation House titled From Four Corners features a variety of musical cultures that were influenced by Arab musical tradition.Next Thursday, the Avidan Ensemble will present the poetry of Nazim Hikmet (1902–1963), the greatest Turkish poet of modern times, set to melodies by Turkish composer Erdem Buri (1923–1993).March 20 at 8:30 p.m. at Confederation House, Jerusalem. For further information: www.confederationhouse.org

ART 7. PRINTING BREAD Four new exhibitions open this Saturday at the Jerusalem Artists’ House. Among them is Motta Brim’s “The Baker’s Brand,” an exhibition of prints about the tradition of baking halla for Shabbat.Opens Saturday at noon. Until May 24.Free entrance. For further information, visit www.art.org.il.8. THE SABRA Israel Prize winner David Tartakover presents a series of new limited edition prints at the Ba’alei Melacha Printing Workshop in Tel Aviv’s Zimmer Gallery.Opens tonight at 8. After the weekend, the exhibition will be transferred to the gallery’s Internet site and store: Zimmer Gallery, 5 Hagdud Ha’ivri Street, Tel Aviv.

KIDS 10. THE LION’S SHARE The Library Lion, an original play based on Michelle Knudson’s popular books, is a great way to introduce children to her lovely tales. For ages five and up.