"Planting an olive tree is a symbolic gesture that represents our striving for peace as well as the promise that the Jewish people will never again undergo the horrors that it has suffered," said Borut Pahor, the Prime Minister of Slovenia.

By KKL-JNF STAFF
JULY 26, 2011 14:11
KKL_260711_A
(photo credit: KKL-JNF)
Advertisement
"Planting an olive tree is a symbolic gesture that represents our striving for peace as well as the promise that the Jewish people will never again undergo the horrors that it has suffered," said Borut Pahor, the Prime Minister of Slovenia.   Prime Minister Pahor joined dozens of other international leaders in planting a tree in the Grove of Nations, which is located in Jerusalem beneath Yad Vashem, the memorial site for those who perished in the Holocaust. Efi Stenzler, KKL-JNF World Chairman, Evan Sovitz, the Slovenian Ambassador to Israel, and Shmuel Merom, the Israeli Ambassador to Slovenia, took part in the planting ceremony.

"I am extremely impressed every time I visit this beautiful country," added the Slovenian Prime Minister during the ceremony.  "Visiting Yad Vashem raises the penetrating question of how people can inflict such horrors on others.  The State of Israel is fighting for her right to exist, and Slovenia is extending a helping hand in a desire to build a better world together.   This is our responsibility as well as our obligation."   Efi Stenzler, KKL-JNF World Chairman, remarked that in Jewish tradition planting 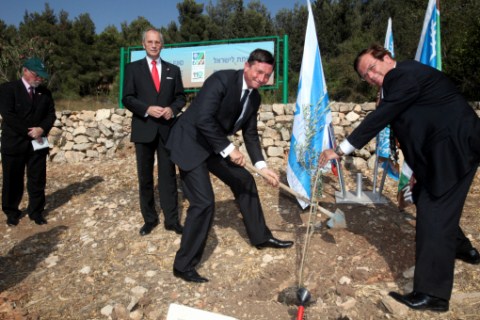 KKLa tree is a sign of true friendship. "The Grove of Nations is different than any other forest in Israel," explained Stenzler.  "This is the place where heads of state express their identification with the Jewish people and their thoughts of friendship with the State of Israel."   Stenzler explained to the participants about the extensive activities of KKL-JNF throughout the country such as forestation, the creation of new sources of water, development of infrastructures for communities and agriculture, and the battle against desertification. He called for cooperation in promoting environmental initiatives, and stated that KKL-JNF would gladly take part in any efforts to promote the environment and the friendship between the two countries.At the conclusion of the ceremony, which was headed by Andy Michelson, KKL-JNF's master of ceremonies, the two ambassadors read the Planters' Prayer.   The Slovenian Prime Minister planted an olive tree with his own hands and watered it.     When the planting was completed, Prime Minister Pahor turned to Chairman Efi Stenzler and made a request: "Take good care of my tree and make sure that it thrives."   Stenzler promised to do so, and invited him to return and visit the tree to see how it has taken root and how its branches have spread.
For Articles, comments or use please contact
Ahuva Bar-Lev
KKL-JNF – Information and Publications
Email: ahuvab@kkl.org.il
Phone: 972-2-6583354 Fax:972-2-6583493
www.kkl.org.il/eng
Advertisement
Subscribe for our daily newsletter