New Axe Super Bowl advertisement shows conflicted countries such as Iran and North Korea, but each battle ends in romance, not bloodshed. 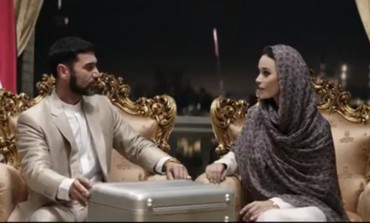 Super Bowl commercials have a knack for being impressive, and sometimes controversial. This year, Axe body spray's campaign will surely be a conversation starter.

The company's latest advertising stunt, called "Make love, not war," specifically designed for the big game, reaches out to the most conflicted corners of the world.Each scene, a dramatization of a battlefield in a war-driven country, ends in reconciliation, not bloodshed. The slogan underneath the YouTube video posted on Tuesday by the company says "In a world filled with war, the greatest weapon is love. Make love, not war with new AXE Peace."

The commercial suggests that body spray is the solution to world conflict, but not in so many words.

An actor resembling North Korean dictator Kim Jong-un overlooks a massive crowd. Although reports have surfaced in the media that the leader had a firing squad execute his girlfriend last year, the scene ends in an unlikely romantic moment. 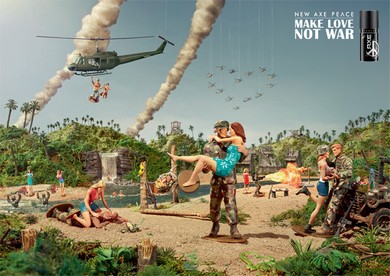 Similarly, an actor depicting former Iranian President Mahmoud Ahmadinejad is shown looking inside a suitcase resembling a bomb. After a tense moment, the man pushes a button, but rather than a violent explosion, the advert ends with fireworks, and an approving woman congratulating him. 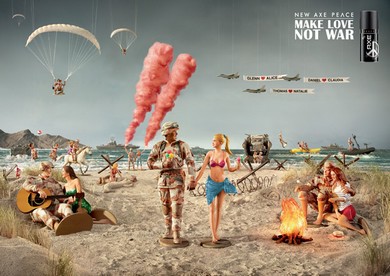 The ad suggests that a world without war is a better world, but it is unclear whether Axe has the ability to stop nuclear warfare. Regardless, smelling pleasant hurts no one.Last year, Bar Rafaeli's make-out session with a nerd in an ad for Go Daddy made headlines around the world.
Advertisement
Subscribe for our daily newsletter