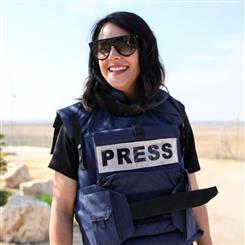 Lauren Izso is a Canadian broadcast and print journalist covering Israel and the Palestinian Territories.

She worked as a breaking news editor for The Jerusalem Post, and went on to host their daily JPOST TV newscast. Lauren then transitioned to i24NEWS in 2015, where she reported on defence and security, presented news bulletins and hosted a weekly documentary news show called “High Definition with Lauren Izso.”

Since, Lauren has transitioned to freelance journalism, and now reports for networks like CBC, RT, TRT, BlockTV and produces for CNN’s Jerusalem bureau.

Where should cartoonists draw the line?

When Smartphones save lives

Weekend Edition: Violence on the field