And the style Grammy goes to....

They can sing, they can dance, but can they dress? Who wowed us, who dazzled us and who just shocked us at this year’s hottest music award show?

By KATHRYN RUBIN
Katy Perry
(photo credit: Associated Press)
Advertisement
Fashion week may be well underway in New York, but out on the west coast a very different type of runway show went down on Sunday night: the 2011 Grammy's. As with every award show, we wait in anticipation not just to see who will win, but rather who and what our favorite stars will be wearing! Unlike the Golden Globes or the Oscars, a different set of rules applies to this music award show. Demure elegance and haute couture is out and vivid colors, glittery sparkles, over the top "bling" and cut out dresses are in!  Even the men dare show up in more than just a simple tux.  RELATED:
Trend Alert: A splash of color
And the winner is… Grammy fashion is known for being unpredictable, and Sunday’s event did not disappoint. But true of any red carpet event, some stars managed to shine better than others.  Find out who was hot, who was not and who was just plain weird? And the winners are... 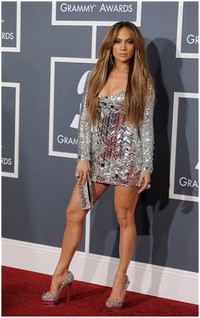 J-loThis girl can sing, dance, and act and now we know that she can dress! A Grammy for style goes to none other than the star of the hit TV series Glee. While the low-cut neckline, cut-out lace details and the dramatic full leg slit, would be something that Rachel Berry would never dare to wear, Lea Michele looked spectacular in her black Pucci gown topped off with solid black platform pumps. The sweet ruffled shoulder detail helped to soften the look for the best pop performance by a group or duo nominee. But, Michele wasn't the only Glee star to dazzle us the other night.  Dianna Agron also went against her character Quinn's preppy cheerleader style, with an edgy up-do, punkish accessories and a classic black Vivienne Westwood frock. Disney princess Selena Gomez definitely looked all grown up on Sunday night as she graced the carpet in a sparkling metallic J. Mendel piece. The teen sweetheart shinned in a stunning gold, floor length figure-hugging (completely age-appropriate) gown.  A style nod also goes out to Jennifer Lopez, who definitely did not look like she came from the block. The new American Idol judge dazzled us as she showed off her legs in a stunning mirrored Emilio Pucci mini. But J-Lo wasn't the only Jennifer to capture the spotlight – all eyes were on Jennifer Hudson's newly transformed dream girl body, which she showed off in navy blue Versace gown topped off with a super tight sexy corset top. The pleated skirt drew attention to her newly toned killer legs, while her sky-high Christian Louboutin stilettos added an edgy dimension to her stunning look.  Another lady in blue, R&B artist Ciara nailed it in flowing Emilio Pucci cut-out blue and white sequined dress that left just enough to the imagination, striking the perfect combination between fun and elegant. 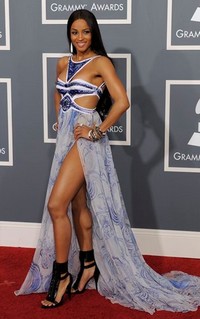 CiaraHowever, Grammy red carpet triumphs weren't just reserved for our favorite music stars. Supermodel Heidi Klum showed us that she still knows how to work the runway, as she stole the spotlight (away from hubby Seal) in her shiny, curve-hugging sequined Julien MacDonald gown. The ultra high slit, a very open top and a sexy, detailed back made sure that supermodel drew attention from every possible angle.  Another musician's wife who stole the spotlight from her man was none other than Nicole Kidman. No stranger to the red carpet, Kidman looked exquisite in a ruffled trimmed curve-hugging petal-print Jean Paul Gaultier mermaid gown.  And newly single presenter Eva Longoria definitely did not look desperate in her flirty black and white mini ruffled dress. The Desperate Housewives star added some Grammy glam by topping off her her look with a sleek up-do and some bold satin pumps. A fashion miss-fire 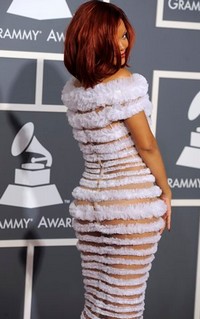 Miley Cyrus may be the tween queen of pop; but, she was nowhere near ruling the red carpet the other night.  Sporting a metallic tiger print Roberto Cavalli gown topped off with over-sized platinum wrist cuffs, the teen star gets one big F on this style quiz. Another fashion flop goes to Paramore's Hayley Williams. While there are time when we can appreciate the band's lead singer unique colorful style, Sunday night was definitely not one of them. The singer appeared in a black ultra short practically sheer cross between a shirt and a dress, that ended with a furry pink skirt-like fixture. While we adored Rihanna's Christian Dior ball gown, which mirrored the flames blazing behind her and Eminem during their heated performance of "Love the Way You Lie," it was her red-carpet gown that left us speechless (and not in a good way).  A cross between a Christmas tree and a wedding cake, her Jean Paul Gaultier sheer-and-tulle-striped gown (that alternated between white fluff and bare skin) left absolutely nothing the imagination. While we typically applaud Rihanna for her edgy fashion choices, we simply cannot lie, this was one major fashion no-no. Touched by an angel? Or touched in the head? It's a mystery that only the "Teenage Dream" singer Katy Perry can answer (or maybe she was still dreaming and thought that this was the Victoria Secret Fashion show?)  All we know is the Katy Perry arrived to the ceremony wearing white wings paired with a custom maid Georgio Armani dress – which was really more of a combination between a glittery bra and a shimmery white sarong. Despite committing this devilish fashion crime, the pop star showed off her angelic side, bringing her 90 old grandmother to the ceremony. 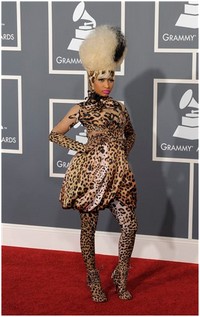 However, amongst all the odd choices of the night, one star stands apart for her utter bizarre choice of apparel. The award for most weird can go to none other than Nicki Minaj. The nominee for best rap performance by a duo or group for "My Chick Bad" with Ludacris, roared her way across the carpet dressed head to toe in a leopard print ensemble (by  Givenchy Haute Couture by Riccardo). And to top things off, she wore a costume made white wig that towered in the air! Finally, a mention must go out to Lady Gaga. Whether you love or hate her show-stopping style, one thing is clear, the woman is committed.  After walking the red carpet in an egg (yes an egg- she was apparently "incubating" in it for three hours to get into character), the eccentric star burst from her shell on stage to perform an egg-ceptional version of her latest single "Born This Way."
Advertisement
Subscribe for our daily newsletter