And the winner is…

The Golden Globes: An award show or a fashion show? Find out which stars dazzled us with their style, while others we wish would never have gotten out of the limo.

By KATHRYN RUBIN
JANUARY 20, 2011 16:26
natalie portman
(photo credit: Associated Press)
Advertisement
While we all tune into award shows to see who will take home the prize, it’s a common fact that we are all secretly waiting for the pre-show. The two hours prior to the show where our favorite actors and actresses strut down the red carpet and we get a close up of what and who they are wearing.Sunday night’s Golden Globe ceremony was no different. Voted for by the Hollywood Foreign Press, the ceremony awards both movies and TV series, and therefore has one of the most interesting turn-outs.RELATED:
Jewish talent takes home Golden Globes in TV and film
Style watch: 50s and 60s chic makes a classical returnSo which of our favorite stars hit it out of the park? And who completely missed the boat on this one. Here's a list of some of the best and the worst dressed of the 2011 Golden Globes: 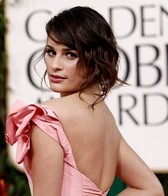 Lea MicheleSTYLE WINNERS...Pink was a huge color at the ceremony the other night, with many of the biggest (and our favorite) stars wearing this lady like tone.  Natalie Portman may have trended towards the style of the white rather the black swan at Sunday night ceremony; but nevertheless the soon to be mother was positively glowing as she dazzled us in her girly Viktor & Rolf silky pink frock.  The best actress winner finished off her gown with a (slightly over the top) hand-embroidered Swarovski crystal red rose.While on screen she amazes us with her voice, at the Globes Glee actress Lea Michele took our breath away in her stunning pink Oscar de la Renta Gown.  An honorable mention also goes out to Scarlett Johanson, who despite her recent divorce was blushing in her Elie Saab romantic pale pink gown finished with some embroidery details. Also, winner Clair Danes definitely did not go unnoticed as she looked all too “pretty in pink” in her Calvin Klein collection bubble gum colored halter dress. Green was another monster color at the ceremony the other night (and no, not because some of the stars were green with envy that they didn’t win). Natalie Portman’s Black Swan co-star Mila Kunis seduced us in both the film and on the red carpet. The best supporting actress nominee captured the spot light in a striking deep green, asymmetric neckline, Vera Wang gown. Catherine Zeta-Jones also went for a deep green as she graced the red carpet in a strapless Monique Lhubblier ball gown.AND NOW FOR THE FLOPS… 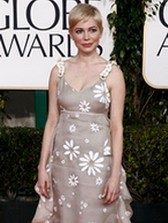 Michelle WilliamsLove and Other Drugs star Anne Hathaway sported an Armani Privé copper gown fully adorned with paillettes and Swarovski crystals (or as Ryan Seacrest put it “little CDs”). While the low-cut back redeemed the style a little, didn’t she learn anything in a The Devil Wears Prada?While Michelle Williams has made some outstanding (career) decisions since her days as the “bad girl” Jennifer on Dawson’s Creek, unfortunately her choice for a gown at Sunday’s ceremony was not one of them. The Blue Valentine nominee sadly got hippy chic as she channeled her inner flower child through a daisy-covered khaki colored Valentino frock.And now we come to none other than Helena Bonham Carter. 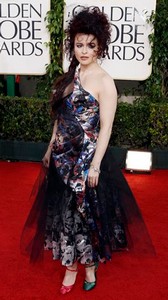 Helena Bohem CarterApplauded for her outrageously over the top roles and crazy wardrobes on the screen, Alice in Wonderland's Queen of Hearts might have taken it just a bit too far this year on the red carpet. And to make matters worse she topped off her strapless multi-colored Vivienne Westwood get-up with two different color shoes.No one would have guessed that half of Hollywood’s royal couple would find themselves at the top of our miss list; but Angelina Jolie most definitely struck out on this one. While it is great that Angie has steered away from her former all Goth black look, her full length emerald gown just didn't do much for her. But don’t cry for Angelina, she may not have won us over for her dress or for her role in The Tourist, but she did leave with the best prize of all, Brad Pitt.
Advertisement
Subscribe for our daily newsletter