The Best of the Red Carpet: Which stars dazzled us with their gowns at this year's awards ceremonies.

By KATHRYN RUBIN
MARCH 4, 2012 11:27
Angelina Jolie
(photo credit: Danny Moloshok / Reuters)
Advertisement
This year’s award season has come and gone. Between the Golden Globes, the Screen Actor Guild Awards, the Grammy’s and of course the 84th annual Academy Awards, some of our favorite actors, directors, and of course musicians graced the red carpet.  Now we may not remember the movies that were nominated this year, but we will remember the fashion.So without further ado, here are the five best of this year’s Red Carpet. The five best dressed of this year’s award season: Sofia Vergara at the Golden Globes
The va-va-voom factor 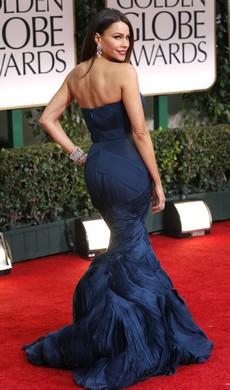 While she can make us laugh at home while watching the hit comedy Modern Family, Sofia Vergara is completely serious in her fashion choices for the red carpet. Vergara showed off her signature curves in a custom-made Vera Wang gown. Fitted up top, the strapless peacock mermaid gown burst into a swirl of pleats below the waist. The gown was finished off with a small train, adding just the right amount of “wow” factor to the ensemble. Vergara completed the look with a carefully selected Harry Winston set or earrings and bracelet. Gwyneth Paltrow at the Academy Awards
Presenting Ms. Super Glam

She may play Robert Downey Jr.’s assistant in Iron Man, but Gwyneth Paltrow looked like a full on superhero at the Academy Awards when she flew down the red carpet in an all white modern Tom Ford creation with a removable cape. For her onstage presentation, Paltrow opted to wear the dress without the cape, displaying the impeccable draped detailing.Michelle Williams at the Academy Awards
Marilyn would have been proud… 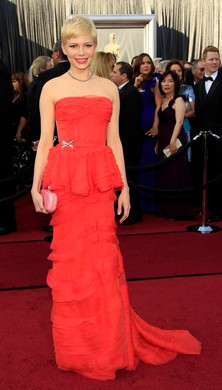 Mishap after mishap, the best actress nominee appears to have finally gotten it right. From frumpy and slightly old-fashioned at the Golden Globes to respectable at the Screen Actor Guild Awards, Williams made her final red carpet appearance this season one to remember. The young star looked positively glamorous, and even whimsical when she arrived to the Oscars in a stunning coral strapless Louis Vuitton peplum gown paired with a pink Bottega Veneta clutch and Forevermark jewels.
Angelina Jolie at the Golden Globes
Queen of hearts 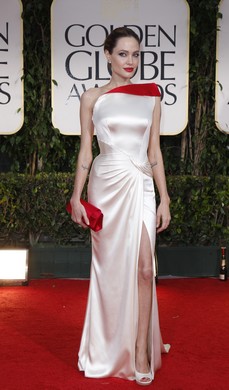 Gracing the red carpet this year as a director instead of a leading lady, Angelina ruled over the Golden Globes. Angie looked positively regal in a formfitting white Atelier Versace gown with red folded neckline, matching clutch, lipstick and her black hair pulled back into simple clean bun. The dress coupled with her severe stare bore a striking resemblance to the queen of hearts. The interesting cut of the dress showed off Angelina's tiny frame thanks to its structured top, rouching at the waist and flowing skirt.Emma Stone at the Screen Actor Guild Awards
An Easy A for this look

The comedic star took our breath away at the Screen Actor Guild Awards in a stunning black strapless Alexander McQueen number. Famous for wearing bright hues on the red carpet, the breakout star made an appearance in a somewhat quirky yet dramatic midi-length dress with a lace bustier by the British label. She paired the ensemble with a matching kull and horse clasp clutch, McQueen peep-toe strappy heels and stunning gold drop earrings.
Advertisement
Subscribe for our daily newsletter