From Elizabeth Taylor to Jacky-O to Lady Di and Nicole Kidman, a look back at the most iconic celebrity wedding dresses of all time.

By KATHRYN RUBIN
Kate Middleton
(photo credit: Reuters)
Advertisement
When people look back and remember their wedding, or that of a family member or a friend, most of it is a blur - all the details that were so important leading up to that day merge into a cloudy haze. While the the flowers may stand out, and whether the food was good or not may come to mind, only one "thing" is truly remembered- the dress! Probably the single most important decision when it comes to planning a wedding, most blushing brides to be will spend months and months trying on different styles and designs - attempting to choose one that captures the tone of the wedding as well as the one that is the most flattering (and who can blame her, all eyes will be on her for that day or night).  With Prince William’s and Kate Middleton’s wedding just around the corner, anticipation is quickly growing as to what the future princess’s gown will look like. Will she dare to go strapless? Or will she play a more conservative royal card? But before women around the world begin to criticize, fall head over heels in love with the style, and start copying the dress (on mass), here is a look back at seven of the most remembered wedding gowns:  First place, for a first ladyIn September of 1953, John F. Kennedy married Jaqueline Bouvier. Jaqueline Bouvier who?!? Better known as Jacqueline Kennedy or Jackie-O, Jaqueline Bouvier married the future 35th president of the United States, in a voluminous ivory silk taffeta gown, designed by Ann Lowe. From the portrait neckline, to the fitted bodice to the wide, embellished skirt that emphasized the future first lady’s tiny waist, and the lace veil, which originally belonged to her grandmother, the gown was an instant classic – giving the young bride just the right start to her style icon career. Six Husbands, Seven DressesUnlike most women who take one or two (max. three) trips down the aisle, Elizabeth Taylor marched down the aisle seven times – each time of course in a different gown. In May, 1950 the violet eyed beauty took her first trip down the aisle when she tied the knot with hotel heir, Conrad "Nicky" Hilton. While their marriage may have quickly been forgotten (they divorced only a few months later), the gown was certainly not. The basque-waisted satin gown cost a $1,500, a shocking amount for the 50s and equivalent to $14000 in today's dollar. Liz Taylor went on to marry many other men, but by the time she got to her firth (and sixth marriage), she decided against the traditional white wedding dress. Taylor married her Cleopatra co-star, Richard Burton, in a yellow chiffon dress with a white floral head dress, and then again in a green frock, when they re-married in 1976. A Fairytale Ending 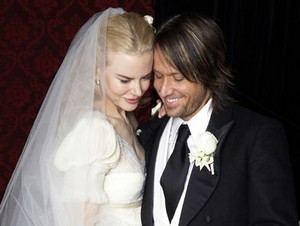 Nicole Kidman
While she may have only walked down the aisle twice (so far), Nicole Kidman snagged the title of best dress of the 21st century, by Conde Nat Brides, when she married hubby Keith Urban in June 2006 – an impressive feat considering that we were only six years into the new century. As both stars are from “down under”, the wedding took place just outside of Sidney. As per usual Kidman stole the spotlight, but this time in a simple, romantic ivory one shoulder puffed sleeved gown decorated with lace (by French designer Nicolas Ghesquiere, the creative director of Balenciaga), which she paired with a cascading silk tulle veil, pearl drop earrings, and shoes designed by Christian Louboutin. A Graceful ExitIn 1956 Grace Kelly left the world of Hollywood glam behind, trading in her Hollywood royalty status for actual royalty.  In a wedding befitting the legendary fairytale romance, Kelly married Price Rainier III of Monaco in a pearl studded, long sleeved silk and lace gown - a parting gift from her former studio, MGM and a style that launched the fuller wedding dress trend. While most wedding dress styles come and go, Kelly’s has forever remained in style. In fact, when it came time for Ivanka Trump to choose her wedding gown, she reportedly worked closely with designer Vera Wang to create the perfect couture wedding dress inspired by the Princess Grace Kelly’s gown.A Fairytale Beginning 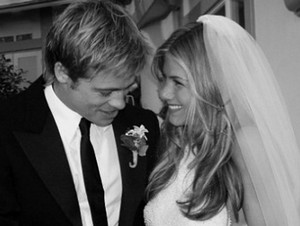 Jennifer Aniston and Brad Pitt
When Jennifer Aniston married Brad Pitt, there wasn’t a woman in the world who wasn’t jealous, of her new super-star husband or of her dress, for that matter. While the marriage may have ended in flames, only a few years later, Anniston got her fairytale wedding in her fairytale gown. Designed by Lawrence Steele, the former Friends' star married the “sexiest man alive” in halter style, white tulle dress adorned with tiny pearls – the perfect wedding gown fitted for a once thought perfect marriage.Tres, Tres PoshWhen former Spice Girl Victoria Adams, married “football” super-star (and stud) David Beckham in 1999, many people probably thought what was he thinking, marrying a Spice Girl, and on top of it the one who really can’t sing. But since they said "I Do" back in 1999, Victoria Beckham has proved that she can do more than “sing” - establishing herself as a successful fashion designer with her own "posh" label. However, even back in 1999, it was apparent that Victoria Beckham had an eye for fashion, when she walked down the aisle in a structured strapless Vera Wang gown. While some questioned her choice of flowers and the crown, this trend-setting star and her wedding dress may very well have played a role in the last two decade’s most popular wedding dress style – the strapless. A Dress Fit for a Princess 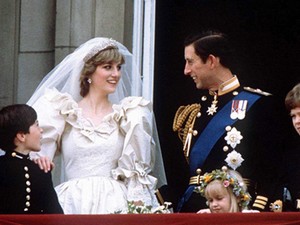 Prince Charles and Princess Diana
Last but certainly not least, we come to Lady Di. From the puff-sleeved, to the thousands of tiny peals and over the top ruffles, there is no disputing it – this silk taffeta gown, was anything but understated. But whether you loved it or hated, Diane’s wedding gown was the most copied design of all time – setting the wedding dress “trend” for the rest of the 80s. So can Kate earn herself a spot amongst the best dressed brides? With Alexander McQueen’s designer, Sarah Burton, rumored to be created the dress, bets are on that the princess to be can – but nothing certain until April 29th.