Ask the Barman: Bringing down the house

Tsahi Hermony mixes the drinks with style at Beeper, a celebrity-endorsed bar with a retro New York theme.

By YONI COHEN
Barman 370
(photo credit: Yoni Cohen)
Advertisement
As if Eyal Kitsis wasn’t busy enough hosting hit TV shows such as Eretz Nehederet (Wonderful country), the loveable presenter recently got involved in Tel Aviv’s ever-growing bar scene. He is one of the owners of Beeper, a relatively new bar which aims to redefine the meaning of neighborhood bar. While there is no cover charge or selection process, this intimate bar can get pretty wild at the weekends with partygoers dancing on the bar and enjoying the fine selection of alcohol on offer.The split level bar, designed in a retro New York in the 80s and 90s style, caters for the 25+ crowd and plays mainstream music as well as some electronica and some light rock. Smooth-talking barman Tsahi Hermony, 36, shows the fun-loving crowd a little bit about how to enjoy themselves using his years of experience. Flipping bottles behind the bar and making drinks using fire, Tsahi entertains the crowds while maintaining a high level of professionalism. When it comes to job satisfaction, he has no complaints and enjoys the fact that he can go to work when the streets are clearer and people are more relaxed. When not living it up at Beeper, Tsahi can be found relaxing on the beach during the day and enjoying the relaxed Tel Aviv lifestyle. 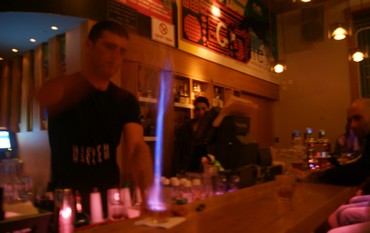 How and when did you get into bartending?In around 1999 I was studying acting and I needed money. It’s Tel Aviv you know, it’s expensive to live here so I started bartending and it just sucked me in. So have you been doing it ever since?Yes. I’ve owned a bar, a managed a few bars over the years and now I’m here. So you consider yourself quite a veteran then?Yes. It’s good that you didn’t say old. Did you do a course or did you learn everything on the job?No I never did a course, I learned everything behind the bar. I started in a small bar which had a limited selection of alcohol and then I moved on from there. So what’s your favorite drink to make?First of all I like people who know what they want to drink. I don’t like it when people ask me to choose for them. There’s usually a choice of over 500 drinks so it can be quite hard to choose. I like a customer who knows his alcohol. A lot of the time in Israel you meet customers who drink just to get drunk, not because they like the actual drink. I like it to be simple. I know how to make cocktails but I prefer the more simple drinks such as whisky straight.Who would be your ideal person to serve at the bar?I would like to serve my dad but he doesn’t drink so that’s why I would want to serve him. What would you serve him?I want to see him do shots. He’s cool in every aspect but once he has a sip of anything he would throw up. 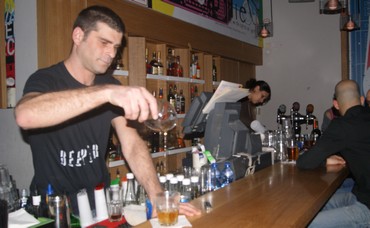 What’s your least favorite drink to make?Vodka Martini. Why?The main goal is to make money and vodka martini, if you do it properly, takes too long. Most people hang out in a bar for about two-and-a-half hours so every second counts. I could serve another ten people in the time that it takes me to make a vodka martini if I do it properly by the book.What is your craziest night?I have had a lot, some of which I can’t remember.  I’ll tell you about a funny night. It was about five years ago and I got a note on a napkin and it said “hello my name is Sharon, I’m sitting over there to your right and if you are interested I would like to get to know you.” Then I turned the napkin over and on the other side there was a note saying “if you’re not then my name is Aron and if you are into guys then I am sitting next to Sharon.” I ended up alone that night but it was funny. As a barman do a lot of people hit on you or is that just a myth?Yes they do. You see people thinking about an opening line all the time but as a barman you always have an opening line. Sometimes you do a little show by flipping the bottles so it makes you their god for the night. What’s the best tip you ever received?I was working in Herzilya and this guy was sitting with his girlfriend and he had an account of NIS 700 and he left NIS 1,700 on the table, then walked out. I made about NIS 3,000 that night. So it’s worth being a barman then?Yes. Most people go to work because they have to; not a lot of people go to work with a smile on their face. Can you tell me a little bit about who comes to Beeper?It’s mainly the 25+ crowd. There are usually more girls than guys which is strange. In most bars I have worked in there is usually about 60 percent guys and 40% girls but here it’s the opposite, there are 60% girls and 40% guys. I don’t know why it’s like that, I mean I like it, but I really can’t explain the reasons why.What do you do in your spare time?I go to the beach. I play volleyball and do daily errands too. Any tips for anyone that wants to be barman?You need to be a people person. You can be the best bartender in the world and know about all the different drinks in the world but it doesn’t matter, you have to know how to talk to people. You have to look good. In other places in the world you can see bartenders who are 50 or 60 years old but in Israel it doesn’t work like that. You have to be in your 20s or 30s here.Beeper, 28b Rothschild Boulevard, Tel AvivOpen everyday from 9 p.m. until the last customer leaves052-678-8965[email protected]
Advertisement
Subscribe for our daily newsletter