Ask the Barman: Life’s too short to be serious

Charlie, barman and part-owner at Heder 140, brings his own version of hipster funk to north Tel Aviv.

By YONI COHEN
Barman at Heder 140 370
(photo credit: Yoni Cohen)
Advertisement
Think of the north Tel Aviv bar scene and you would be right to imagine laid back neighborhood joints, swanky wine bars and mainstream dance clubs. All that, however, may be about to change. Relative newcomer to northern Ben Yehuda Street, Heder 140, is trying to bring a taste of hipster life to the otherwise “mainstream” neighborhood. Entering the small dimly lit space, the eclectic mix of artwork on the wall sends you back to the 90s, with a world of memorabilia complete with bright fluorescent colors and icons of the time. Heder 140 is not your average bar. Though it’s a fish out of water when compared with its surroundings, it’s still unique when compared with other similar establishments in the city. For those that miss their fix of nostalgia, this intimate bar, complete with lava lamps, is worth checking out.There’s enough weird and wonderful stuff to look at as well as interesting people to stare at while sitting at the bar waiting for the barman to show. Enter barman and part-owner Charlie, with his infectious smile and loveable laid back personality. Music is this man’s life, and his passion to bring his love of music to the people shows. Embracing the retro hipster vibe that Heder 140 exudes, Charlie looks the part and fits right in with the other trendy bar staff and customers. Charlie mixes up some of his favorite cocktails, most of them anise-based, while making sure the music is up to scratch and everyone is having a good time. Those looking for to dance to Mizrahi music or groove to the latest Rhianna hit should stay at home. How long have you been bartending?Three years.How did you get into it?I really enjoyed the nightlife scene, then I did a barman course and I gradually got more into it. Who would be your dream customer?Jonny Depp.Why?I really like him and I think he’d like the music here and the general good vibes. I mean I’m not certain he would be into but I would really hope he was.What drink would you serve him? Why?Jack Daniels. Because he’s American.What’s your favorite drink to serve?I really like cocktails based on Arak. Arak is actually the main drink that we have here at the bar. We specialize in drinks with anise. I really like to play with these flavors and make up cocktails with them. We have anise from all over the world. What’s your least favorite drink to serve?I don’t like vodka. And I don’t really like Red Bull. So I guess I would say vodka Red Bull is my least favorite. 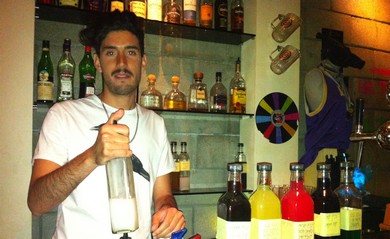 Who’s the most interesting customer you’ve ever had?I had a pimp once. How was that?It was very interesting. He told me all about the trade and what goes on behind closed doors.What’s the craziest night you’ve ever had behind the bar?We had a crazy party recently for one of the owners’ birthdays. It was really late, there were about 30 of us in the bar and there was not one person left on the floor. Everyone was on the bar and on the tables dancing the night away and then a policeman came in. He ended up joining in with the dancing. What’s the best tip you’ve ever received?I once got $200 from a guy at a place in Givatayim. He was a tourist from the US. He gave me $100 for putting on a song that he liked and $100 for the meal. What tips do you have for someone that wants to be a barman?I wouldn’t recommend that anyone do an official bartending course because I think it’s a complete waste of time and money. To be a good barman you need to sociable and know how to talk to people. Be a good person and an honest person - that will leave you with a smile on your face. 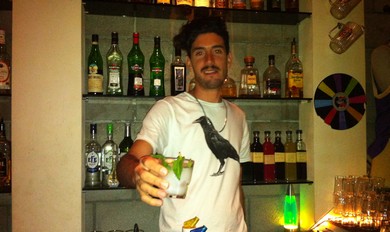 Do you smile at work?I’m always smiling. I understand you are one of the owners as well as a barman here?Yes. The design here is very unique, what was the inspiration behind it?We went for a retro 90s theme with a Berlin twist. We wanted to open a place like this in the north of the city instead of around the Allenby and Rothschild area where there are loads of places like this. We wanted to bring the world of the hipsters to the northern neighborhoods. Why did you want to bring that scene to the North, which is known for the more upmarket and more mainstream places?We wanted to give the people of this area a little taste of the scene. Instead of just listening to Mizrahi music or Rhianna and Britney Spears, we wanted people to be able to listen to something a little different, and to enjoy it. We could’ve opened a more mainstream place here but we decided to open something with different music, different people and different vibes altogether. So what kind of music and vibes can be people expect here?We went along the lines of anything that’s a bit different from the mainstream. In terms of music we have rock, classic, indie rock, indie pop, disco, house and a bit of dub step. 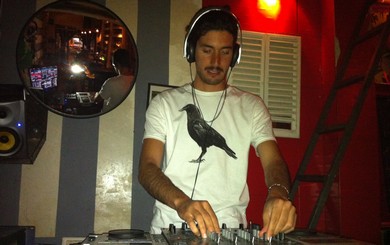 Do you have any kind of music background?I’m actually a musician, specializing in electronic and techno music. I studied to be an electronic music producer at BPM College in Tel Aviv.Do you have any kind of live music events here at Heder 140?We have spontaneous events but we still don’t have any kind of organized schedule. But we’re working on it. What do you do when you’re not at work?I make music. My music partner and I actually have a studio in Jaffa. We’re called Cruz Kontrol. Do you want to work in bars all your life?I actually want to pursue my musical career but I’d like the nightlife scene to always be a part of my life. It’s not something I’ll be able to give up on so easily. I want to add one more thing. Please do.The world doesn’t belong to the serious people. 140 Ben Yehuda Street [email protected] Tel: 057-360-0360