Ask the Barman: No time to mess

Jonathan Clark uses his years of experience to keep the customers at TA's upscale Messa happy.

By YONI COHEN
Bartender Jonathan Clark 370
(photo credit: Yoni Cohen)
Advertisement
Chef restaurant Messa in Tel Aviv is famous for its sophisticated white and cream interior, which is reminiscent of a grand European dining room. The adjacent bar, however,is a whole different story. The black-themed bar offers customers an intimate dimly-lit room where they can indulge in the outstanding food that the restaurant has to offer while sampling a fine selection of alcohol. The bar at Messa tries not to take itself too seriously, while still maintaining the high standards that the name evokes. The atmosphere is a little naughtier and the aim is to simply have a good time. Experienced bartender Jonathan Clark looks at ease behind the bar which takes up a large proportion of the floor space at this relatively small place. A computer science student by day, Jonathan can be found studying hard, but when night falls he is busy entertaining the discerning customers. Jonathan, who has worked in some of the best bars in London as well as Tel Aviv, is proud to be a part of an experienced bartending staff that helps to keep the international crowd at Messa happy. 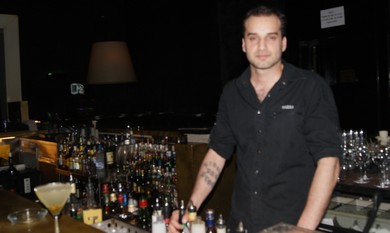 How did you get into bartending?When I was 21, straight after the army, I went to a bartenders course. You always think that the life of a bartender is very glamorous and you always hear how they get it on with girls and how they have a great time behind the bar. It sounded so magical. That helped me make the decision to go to the bartenders course. Once I finished that, I moved to London for two years and worked in a few bars there. What’s the difference between working here and there?There’s a huge difference. There’s a big difference in mentality. Most people here in Israel drink Vodka Red Bull and stuff like that whereas in London people are more into cocktails and are much more particular about their drinks. In Israel you can really change their minds and show them new stuff. Did you learn more about bartending on the course or while actually working?On the course you study more of the theoretical stuff. The practical element is what you learn on the job. Working here at Messa can be very challenging and it’s actually quite a high pressure job. The reality is very different from what they actually teach you. How long have you been doing it for?Almost seven years now. So that’s quite a long time in the bartending world then?Yes. I’ve been working here at Messa for nearly three and a half years. There are people who have been working here for five or six years even. We are a very experienced staff.Messa is well known for its high standard, so you think that the staff and the atmosphere are very different from a lot of other bars in Tel Aviv?Yes definitely. It’s very challenging for a new person to start working here and being able to perform at the high standard that’s expected. What’s your favorite drink to make?Old Fashioned. It’s just a classic cocktail that’s not too complicated. It only takes a couple of minutes to make and it’s just so tasty. What’s your least favorite drink to make?I don’t really have a least favorite one to make but one cocktail that I can’t stand to drink is Negroni [a Campari-based cocktail]. I can’t figure out how people drink it. It tastes like gasoline to me. 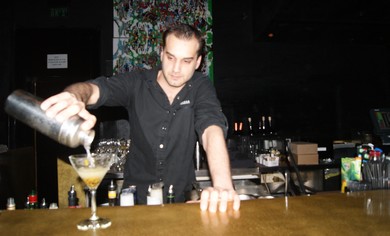 What’s the worst thing about the job?After a few years of working in the job your body starts to feel the effects. The hours are a bit crazy. Staying up till 5 a.m. most nights can be very challenging. Every time you need to wake up and go to school, and it gets harder and harder. So are there any advantages to have free time during the day?Most of the time I study but there are a lot of advantages to having all that time. When you are on vacation from school you can go to the beach and hang out with friends. Do you drink while you are working?In the past few years I have tried to reduce the amount that drink while behind the bar. I used to drink a lot but my body just can’t take it anymore. I probably drink a couple of chasers each night. Do people buy you drinks?Yes of course. The problem is that I can never say no. I’ve had a few nights where the customers are very insistent on drinking with me. I’ve definitely found myself not being able to walk home at the end of the night. What’s the best tip you’ve ever received?It was actually in London and not here in Israel. I was working on New Year’s Eve and received 2,000 pounds. The group I was serving drank about 30 bottles of champagne.Who would be your ideal drinking partner?Charlie Sheen.Why?I would love to explore what’s going on in his mind and I think the best way to do that would be to get him drunk. What drink do you think he would like?I think he’s more of a scotch kind of person. Do people flirt with you a lot when you’re behind the bar?It happens both ways. Bartending is a really social job. You always find yourself flirting with girls, even if it’s not intentional. It just happens. It’s almost as if they expect if from you. Finally, what do you think it takes to be a bartender?You need to be able to handle the pressure. You need to be able to see everything that’s going on around you. 19 HaArba'a Street, Tel AvivTel: (03) 685-6859Open everyday from 7 p.m. until the last customer leaves Follow @JPost_Lifestyle