Ask the Barman: Stepping up to the challenge

Daniel at TA's Josepha bar uses skills he's picked up over the years to make sure his customers have a good night.

By YONI COHEN
APRIL 19, 2012 16:38
Barman at Josepha bar 370
(photo credit: Yoni Cohen)
Advertisement
Josepha bar in central Tel Aviv may look unassuming from the outside, but inside customers are greeted with a great selection of drinks, an interesting tapas menu and a team of friendly staff. With a recent makeover, Josepha has been turned into a relaxed bar with a grown-up sophistication, catering for the 25-plus crowd.Daniel, a self-confessed people person, takes his role as a bartender in his stride and uses his years of experience in the field to make customers happy. When not studying at university or watching sports from the comfort of his own home, Daniel can be found in this neighborhood bar, serving drinks and flirting with the locals and tourists alike. Originally from Jerusalem, Daniel is happy to be in Tel Aviv and says that the scene in the White City is better because people are always out to have fun. How did you get into bartending?While I was in High School my neighbor had a catering service and I started as a waiter and then I moved into bartending because he liked me. After the army I started bartending in Jerusalem, where I’m from. When I moved to Tel Aviv I found bar work here. How long have you been doing it for?Eight years. That’s quite a long time. Do you consider yourself a veteran?No. Not at all. Never. 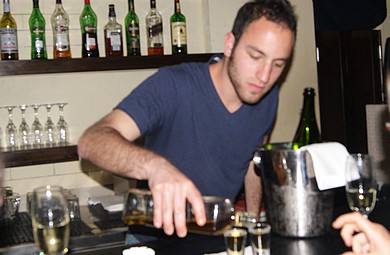 What’s the craziest night you’ve had as a barman?Once I worked at a trance party that started at 4 a.m. and lasted until 8 p.m. It was crazy. I couldn’t stand for three days after it.Where do you get your energy from?Well if you stop then you can’t do it but if you keep on going then it’s easier. You are always with people, which makes it easier. Do you drink on the job? Does that help or does it make it worse?It doesn’t make it worse; it helps. But you can’t drink too much. You need to stay on your feet. Who would be your dream customer?Clint Eastwood. Why?He is such a man. What would you serve him?Some good whisky, with no ice. No chasers, no shots, nothing. Just good whisky. Who would be your ideal drinking partner?Scarlett Johansson. I actually just saw her. Where?I was at a concert in New York. I went to the bathroom and she was next to me in line. What’s the strangest thing that’s happened to you while behind the bar?You get some rude offers. Female bartenders get a lot more, but male ones also get their fair share. I got an offer to go topless by two lesbian customers. 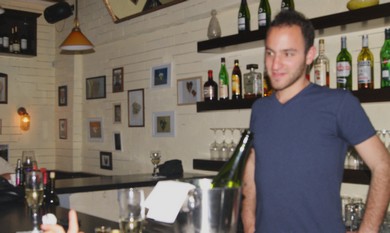 That’s a compliment. Yes, but they were a bit older than me.Do a lot of people flirt with you?No but you look better when you are behind the bar. The same person that stands behind the bar will look better than in front of it.
It plays to your advantage then?Well, we have a step so we’re taller when we stand behind the bar.  That’s a secret. Don’t tell anybody. What’s your least favorite drink to make?Mojito.Really? Why?It’s messy. Every time you make one there’s a lot of cleaning up to do. I do make them a lot though. It’s very popular among Americans. Americans also love having a lemon after a shot. In Israel people just don’t do that. While we’re on the subject of cultural differences, can you explain the Israeli obsession with having a “chaser” after every beer?The main reason is because people here want to get drunk. It’s all about the speed. What’s the best tip you ever received?One guy once left a NIS 500 on an NIS 250 bill. He was a tourist. A German tourist.
Do you get a lot of tourists at this bar?Yes. We get a lot of Americans actually. What do you think it takes to be a bartender?You have to like people. You have to be charismatic. You have to remember that the experience you give the people is the experience they will have for the night. It depends on you. You have to know how to work under pressure. Josepha BarFrishman 41, corner of Dizengoff, Tel Aviv057-944-3828josepha.bistro.bar@gmail.com