Iconic street has variety of bars and restaurants to choose from including French and Italian cuisines.

Brasserie
(photo credit: Courtesy Brasserie)
Advertisement
Kassandra Grunewald is the Co-Founder of TasteTLV. TasteTLV is the ultimate culinary guide for dining in Tel Aviv.Most tourists and newbies to Tel Aviv enjoy wandering around the center of town, seeing the sites, learning the ins and outs until they feel comfortable. When people start feeling comfortable they start spreading out to the south of Tel Aviv, Florentin and Jaffa. However for those of us who are natural explorers or just been around for awhile - we realize that the north of Tel Aviv offers peace and quiet from the daily grinding of buses, trucks and garbage collectors.A great way to journey from the depths of central Tel Aviv out to Hayarkon Park in the north is on a street named after the medieval Hebrew poet and philosopher Solomon Ibn Gvirol. Ibn Gvirol Street will keep your interest for a long time to come with a variety of bars and restaurants to choose from.Below is the travellers guide to all things food related on Ibn Gvirol, listed in order from south to north.Ruben’sTechnically Ruben’s is located on Yehuda Halevy Street, but it’s close enough that it's hard to even notice.Legend has it that there was a Jewish German bread maker, Ruben, who moved to the United States over 150 years ago. Ruben began going around to all the casinos in New York, and started selling sandwiches to the mafia. That, ladies and gentlemen, is how the New York deli sandwich started. 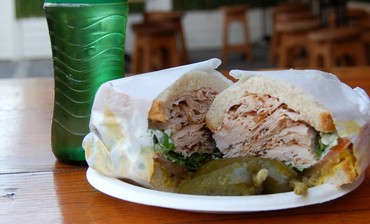 Ruben’s (Laura Goldstein)
Ruben’s (Laura Goldstein)Following in the tradition of Ruben, the four friends who started Ruben’s in Tel Aviv were aware that they had big shoes to fill. All four spent a year and half on Rothschild Boulevard, steaming meat from their porch. Regev, one of the owners, jokes that they must have steamed up the entire street.Today, they spice and steam the meat and leave it just a tad undercooked so they can vacuum pack it. Then they wait until you order to finish steaming it, so each sandwich is fresh. When ordering a sandwich, they add the meat to the steamer and slice it there and then, weigh it to just the right amount, and place it on slices of thick, fresh and warm bread.Taste TLV Recommends: Grab a beer on tap for a perfectly balanced meal.112 Yehuda Halevi         077-4908050Hours: Sunday to Saturday from 11:30 a.m. till  1:00 a.m.Carpaccio BarDuring chef Asaf Doktor’s career in the kitchen he noticed that patrons hold a great interest in appetizers. This realization inspired him to start a restaurant that would transform appetizers into affordable main courses. The quality of the raw meat is apparent in every dish. It's possible can actually feel the freshness of flavor and creativity in each dish, from sirloin to fillet carpaccio. 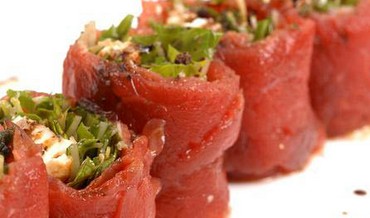 Carpaccio Bar (Courtesy Carpaccio Bar)
Carpaccio Bar (Courtesy Carpaccio Bar)The place is nothing but a small bar, however the welcoming tables flow out onto the Ibn Gvirol sidewalk as if the street was built for them. The dishes are so delectable that you could get by without bread. The atmosphere is friendly and cheerful so it’s a great place for a late evening bite with friends.The menu also includes various treasures such as carpaccio wraps, sandwiches, salads and a fine selection of fish dishes that include ceviche and a salmon tartar.Taste TLV Recommends: The daily specials.Ibn Gvirol 8(03) 609-8118Hours: Sunday to Saturday from noon till last customerBrasserieThe Brasserie is one of those place that many Tel Avivians swear by. Owned by the impressive hospitality group, R2M, Brasserie and its Parisian-style dishes, cosmopolitan vibe, and round-the-clock filled seats brings the best of Tel Aviv to the tabletop. 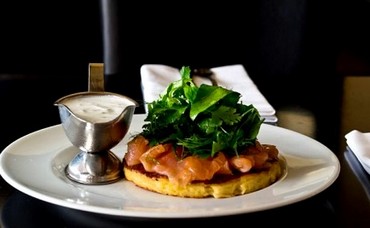 Brasserie (Courtesy Brasserie)
Brasserie (Courtesy Brasserie)From its conception in 2002 the bistro has been open 24 hours a day, serving classic French dishes. Each dish, both in flavor and presentation, unfolds layers of refined detail. Today the head chef, Sobel, oversees Brasserie’s three kitchens with a rotating staff of thirty six, ensuring that the dishes and their respective flavors are kept at the highest level of quality. If that isn’t enough to digest, Sobel must make certain everything runs smoothly for the 1,200 diners who eat at Brasserie each day round the clock.Six tons of potatoes a month are hand-cut and fried twice in order to reach their prized crispness. Almost all the ingredients used are local and fresh with the intention of utilizing the whole product, a staple in classic in French cooking.Taste TLV Recommends: Go in the middle of the night.70 Ibn Gvirol                   03-6967111Hours: 24 hours a dayVanigliaThe original shop, the size of a closet, opened in 2001 on Basel Square. Vaniglia now has over eight branches, and after 10 years of business, owner Itay Rogozinsky still insists on visiting each branch at least twice every week. He checks on the smells, flavors, design and cleanliness of each establishment to make sure everything lives up to the highest standards.The mad-for-ice-cream-scientist Itay explains why sorbet is his favorite: “Sorbet can actually accentuate the aromas, colors, and tastes of a fruit.  It also brings it to an enjoyable texture and removes any work involved in consuming your favorite fruit.” 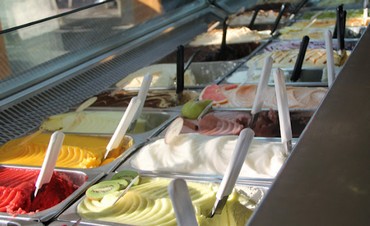 Vaniglia (Karen Cohen)
Vaniglia (Karen Cohen)Favorites include the Campari Grapefruit sorbet, the syrah with Israeli safadoneh pears, the 10 Spices, the berry sorbet and the french vanilla. Whether you are feeling adventurous enough to experiment with your taste buds, or stick to your favorites - you can be sure that the ingredients in the ice cream at Vaniglia are of the highest qualityWhether it’s Itay telling the farmer which branch he wants his oranges from, or that he makes sure only four cookies are crumbled at a time, you are indulging in one of the most perfected desserts in Tel Aviv.Taste TLV Recommends: Be adventurous and eat this treat while sitting down.Ibn Gvirol 98      (03) 602-0105Hours: Monday to Wednesday 10 a.m. till midnight, Thursday to Sunday 9 a.m. till midnightOliveryWhile Italian restaurants can be quite standard, Olivery packs a surprise punch. Tasty and beautiful, the place also feels very approachable and comfortable. Quality speaks for itself, and in this case it is not drowned out by an overly forced atmosphere.Chef Rami Aminov has studied in Rome, Tuscany and Sicily, so it’s clear that the culinary influences are authentic and natural. 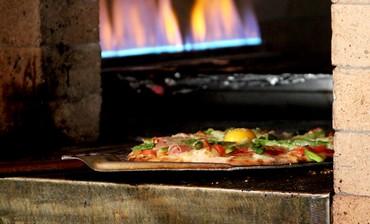 Olivery (Karen Cohen)
Olivery (Karen Cohen)The pastas are stirrings of Roman classics, the pizzas are kneaded after Neapolitan dough, and the rich risottos blossom from northern Italian techniques. The wooden framing and the welcoming and friendly staff make this eatery a perfect date spot as well as the setting for a family gathering.The devil is in the details and even though there are a handful of choices of Italian on Ibn Gvirol, this winning and affordable choice is highly recommended.Taste TLV Recommends: The four fungi pappardelle pasta.
Ibn Gvirol 137                           (03) 544-6076Hours: Everyday from noon till midnightKassandra Grunewald is a co-founder of TasteTLV.com. She has been an avid foodie since she can remember making meals out of dandelion leaves and sand in the backyard for her guests.