Wine Talk: Beer from the cockpit

By ADAM MONTEFIORE
MAY 1, 2014 11:47
Beer
(photo credit: Courtesy)
Advertisement
Israel is making some pretty good beers these days. From being virtually a beer desert, the country is beginning to develop a craft beer culture.Among the new wave of boutique breweries is the impressive Alexander Brewery. This is a start-up, engineered by beer enthusiast and former pilot Ori Sagy. The brewery may be small and reasonably new, but it has already won some very impressive international prizes in some of the world’s most prestigious competitions. Gold at the European Star Competition was followed recently by another gold medal at the prestigious World Beer Cup in Denver, Colorado.It could be that the little Alexander Brewery is putting Israeli beer on the world beer map.Alexander Brewery is situated in Emek Hefer, between Hadera and Netanya. It is named after the nearby Nahal Alexander, which is either a river or a stream, depending on how complimentary you want to be. It flows from the Samarian Hills to the Mediterranean Sea, through the Hefer Valley. It is named after Alexander Yannai, once king of Judea.Nahal Alexander is home to the country’s largest habitation of soft-shelled turtles. They can grow to a large size. So the turtle featured on the brewery’s logo is both local and appropriate. The wings are a nod to Sagy’s previous career.Ori Sagy is someone who reads, talks and dreams about beer. He studies it, visits breweries and drinks beer in other countries whenever he can.He is a permanent student of beer and has so far been unable to quell the passion. There is nothing about beer that he does not like. He started as a home brewer like so many others.When his beers won first place in Israel’s Home Brew competition, it sparked a fuse for him.His passion for beer reminds me of a little boy who wants to fly planes and ends up a fighter pilot in the Israeli Air Force. 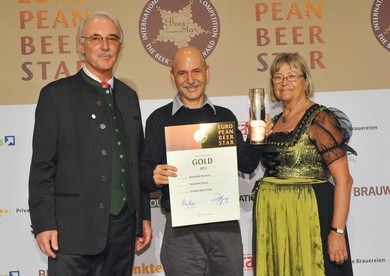