Cheifs hit Tel Aviv with the perfect Middle Eastern soundtrack, complete with a surf-rock version of the ‘Exodus’ theme. 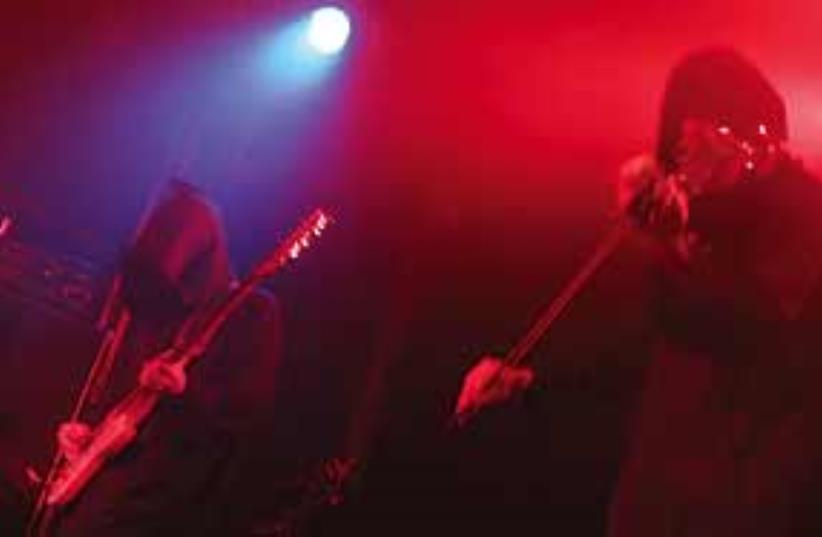 sc3
(photo credit: Yifa Yaakov)
Advertisement
Secret Chiefs 3Barby Club
Tel Aviv
May 2erusalem can be regarded as a convergence, a crossroads: between Christianity, Judaism and Islam; between the secular, the Orthodox and the various manifestations of orthodoxy; between Eastern and Western civilization. The significance is not lost on Trey Spruance, electric guitarist, electric saz player and founder of avant-garde rock band Secret Chiefs 3. For Spruance, who made the transition from a Protestant but secular upbringing to Christian Orthodoxy, a short trip to Israel smack-dab in the middle of the eastern European leg of his band’s tour is “not a pilgrimage, but a tourist visit.” The pilgrimage, he says, is yet to come.Spruance’s music – in the absence of a better description for his multifaceted, awe-inspiring instrumental compositions and arrangements – may be classified as avant-garde, but the musical and cultural themes it addresses are as old as East and West themselves.Secret Chiefs 3 - Spruance, virtuoso multi-percussionist Ches Smith, violinist and guitarist Timb Harris, keyboardist Jai Young Kim, excellent bassist Toby Driver and, behind the scenes, a terrific Berlin-based soundwoman – perform dressed head-to-toe in black robes, monks’ hoods shielding their faces from the crowd. Experimental American drone band Sunn O))) uses similar onstage costumes and exhibits a similar flair for dramatics and atmospherics, so it is no surprise to see Harris wearing a t-shirt paying homage to that band (with whom, incidentally, he has also played). He is a versatile musician, switching at ease not only from violin to guitar but also from classical-style fingering to Oriental glissandi.Spruance, who lives on a mountaintop outside Santa Cruz and chops wood every winter for heating, is nothing if not a dedicated, conscientious musician. He channels his abundant creative energy into creating compositions that seem to have a direct connection to all that is primordial, but retain a fluid rhythm that moves one’s body right along with one’s mind – so much so that some of the songs sound like a stilted, staccato bellydancer’s soundtrack.The band’s influences are as hard to quantify as their music is to classify. They run so deep that the average listener would not think to pick up on them. Instead, they would hear vaguely familiar sounds evocative of the Orient: Arabic, Indian, Persian, Turkic and more. To the Israeli crowd, it may have sounded like home. To my own untrained ear, it sounded at times like a prayer, with certain melodies recalling certain Sabbath hymns and well-known Sephardic melodies.After a short but satisfying opening act by Israeli band Kruzenshtern i Parohod – whose ability to mesh the psychotic with the whimsical is second only to their ability to reinvent everything from klezmer to the Beatles – the musicians of SC3 take the stage, cheered on by hundreds of music enthusiasts and die-hard fans.The Chiefs begin with the explosive “Book T: Waves of Blood,” a cover of a 60s rock ‘n roll song off their 1998 album Second Grand Constitution and Bylaws. From then on, their tempo is relentless. They charge forward with the thoroughly enjoyable, violin-driven “The 15,” a previously unreleased original composition. It is followed by “Labyrinth of Light,” a dark surf track by UR, one of SC3’s satellite bands.As the show progresses, what strikes me most is that in this unique ensemble, no instrument is in the background. The bass, drums and keyboard play as big a part in the melody as the guitar and violin, frequent solos highlighting their contribution to that special Secret Chiefs sound. The abundance of instruments and interlaced melodies in some of the songs promises a rewarding experience for those who have an ear for detail as it all comes together; even the endless variations and recurring themes have interesting, unexpected twists.With the crowd already warmed up and thirsty for more, the Chiefs turn it up a notch with “Bereshith” and their brilliant take on the Halloween movie theme. The epic and somewhat biblical “Combat for the Angel,” from the band’s third studio album, Book M, draws a fervent reaction from the crowd. The Chiefs play it beautifully, the drums beating unremittingly as Harris’s violin meanders back and forth along the Oriental scales. Asia, however, is not the Chiefs’ only influence. Played live, some of the songs are set to such unlikely rhythms as rockabilly and Irish jigs. Drums again take center stage in “Dolorous Stroke,” also offBook M, a highlight of the show. Spruance’s guitarand electric saz are still there, as are the keyboard, but they serveas an eerie prelude to Smith’s wild drumming, later accented by anelectric guitar melody. “Exodus” comes next, and the band is in itselement playing the famous theme – rescored by Spruance on the 2004album Book of Horizons as a surf-rock anthem – infront of an impassioned crowd in Tel Aviv. Not surprisingly, theChiefs’ version sounds no less poignant and triumphant than theoriginal. They end the show with a second encore, “Renunciation,” acover of a track by 1970s Indian musician Ananda Shankar.What do the Chiefs sound like onstage? For one, they spare nothing whenit comes to hard-core instrumental music. Imagine what would happen ifyou meshed Sonic Youth, the Jesus Lizard and progressive rock bandswith a traditional Oriental ensemble and added a dash of 60s surf-rockvibe. Violent desert sandsurf music? Something like that. The endresult is the perfect Middle Eastern soundtrack, with accents ofHollywood, Bollywood and old-time rock ’n roll.
Advertisement
Subscribe for our daily newsletter