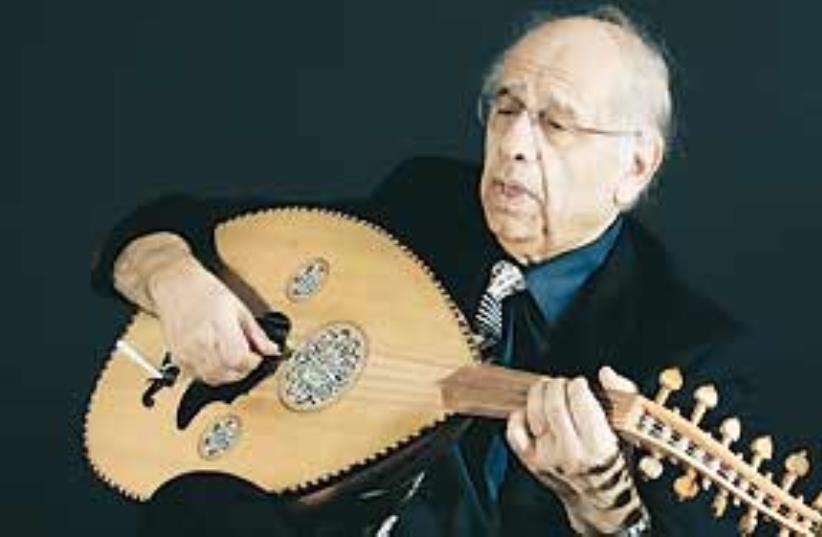 Yosef Shem Tov 311
(photo credit: Micha Simhon)
Advertisement
Micha Simhon’s current show at the Jerusalem Artists’ House can only be described as a labor of love, which, it seems, endured a protracted gestation period. The theme of Simhon’s Makam photographic exhibition is uncomplicatedly explained by its subtitle – The Jewish Musicians of Classical Arabic Music – and features 14 very senior citizens, some of whom have already passed on to the great bandstand in the sky, and all of whom brought musicianship of the very highest standard with them when they made aliya some six decades ago. “I am a photographer who loves music,” says Simhon. “I think if I could ask for a God-given talent, I’d ask for the ability to play music, not taking photographs. I cannot possibly envisage my life without music.” Names such as nonagenarian composer, oud player and violinist Salim al-Nur, 83-year-old ney (flute) player Albert Elias and oud player Yossef Shem-Tov (aka Yousef el-Awad – “awad” meaning oud player in Arabic), who passed away three years ago at the age of 87, may not mean much to fans of hip hop, rap, rock or even western classical music, but almost all of them were revered stars in their countries of origin. Most of Simhon’s subjects hail from Iraq, a couple were born in Egypt, and all were among the mainstays of music across the entire Arabic world. In fact, Makam (“maqam” is something akin to a musical mode in classical Arabic music) represents something of a personal consummation for Simhon. “I come from a Sephardic background, but as a kid, and even later, I always ran away from that stuff. You have to remember,” says the fortysomething photographer, “that, in those days, Sephardic culture was considered inferior to the ruling Ashkenazi culture. My aunt, who comes from a long Israeli-Palestinian lineage – her family originated from Nablus – used to listen to [iconic Egyptian singer] Umm Kulthoum on the radio, and I would cover my ears and tell her to change the station. I repressed my own family’s culture, even though my parents didn’t listen to Arabic music.” SIMHON’S EPIPHANY and return to the cultural fold came many years later, around the time of the Oslo Accords ceremony in the Norwegian capital. “I remember hearing classical Arabic music on one of the main radio stations, which was a very rare occurrence, and feeling ‘hey, that’s my music, that’s my family’s music.’ But I also realized it’s an acquired taste. It’s not something you can hear once and immediately fall in love with. When you’ve heard it about five times you begin to get addicted.” Besides paying tribute to al-Nur and his peers, Makam is also part of Simhon’s effort to do justice to these musicians who, following their aliya, also formed the backbone of the IBA’s Arab orchestra. “I set my subjects against a black backdrop, in a formal setting, like western classical musicians’ photographs. I wanted to give them their due as highly respected musicians.”
Simhon’s road to the musicians was facilitated by his wife, Sigalit,who had previously worked on a documentary on some of them, and by afriend, Dafna Dori, a Jerusalemite singer of Baghdad descent. Even so,Simhon had to do some legwork to get the exhibition subjects to sit forhim. “Some of these guys, despite their advanced years, were difficultto tie down for a photo shoot,” he recalls with a chuckle. “Some ofthem said ‘what do I need this for?’ and others were busy performing,both here in Israel and abroad. But I think they were all happy withthe results. I hope they all feel I have given them the respect theydeserve – not just from me, but from all Israelis.” The exhibition runs through May 1 at The Jerusalem Artists’ House,Rehov Shmuel Hanagid 12, Jerusalem. for more information: (02)625-3653, artists@zahav.net.il]
Advertisement
Subscribe for our daily newsletter