Seth J. Frantzman is Oped Editor and Middle East affairs analyst at The Jerusalem Post. He has covered the war against Islamic State, three Gaza wars, the conflict in Ukraine, the refugee crises in Eastern Europe and also reported from Iraq, Turkey, Jordan, Egypt, Senegal, the UAE, Ukraine and Russia.

Born in Maine, he received his Ph.D from the Hebrew University of Jerusalem in 2010. He previously served as a research associate at the Rubin Center for Research in International Affairs at the Interdisciplinary Center, Herzliya and a lecturer in American Studies at Al-Quds University. Currently he is the Executive Director of The Middle East Center for Reporting and Analysis and a Writing Fellow at the Middle East Forum. Frantzman has conducted research and worked for the JDC, The Shalem Center, the Jerusalem Institute for Market Studies and as a Post-Doctoral at the Hebrew University of Jerusalem. He was a Congressional intern for Congressman Jim Kolbe while studying at The University of Arizona.

A contributor to Defense News, The National Interest and the Digest of Middle East Studies. His current interests include regional security, Kurdish issues, refugees, the history of the Holy Land, the Beduin and land laws. As a features writer and commentator on current affairs and politics he attempts to provide new views on old canards, reflected in his column's name, Terra Incognita. He is the author of 'After ISIS: America, Iran and the Struggle for the Middle East' (Gefen Publishing 2019).

American protests go global: Could it be a generational awakening?

What can US learn from Israel’s military experience with riots

If Antifa is a 'terrorist' group, how could the US fight it?

US police target dozens of journalists during protests

White supremacists, Soros, 'Russians,' and Antifa blamed for US protests

Iran and Turkey seek to support riots in the US 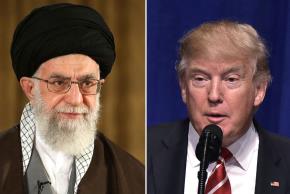