Rap star Azealia Banks is coming to Tel Aviv to rock out, "and that is THE END OF THE DISCUSSION."

By ARIANE MANDELL
FEBRUARY 20, 2018 13:42
Azealia Banks at the 2013 Governors Ball Music Festival in New York.
(photo credit: ILYA S. SAVENOK / GETTY IMAGES NORTH AMERICA / AFP)
Advertisement
American rap star Azealia Banks struck back with a vengeance against anti-Israel naysayers who protested her upcoming show in Tel Aviv in a searing Instagram post this week."My fans in Israel have been waiting years for me to come," she said in a comment on her own post.  "I too live in a country which has its issues but I cannot hold my fans in America responsible for Our country's problems and deny them the right to a good time. The Kuntbrigade is GLOBAL honey. The KUNTS connection rises far above any political influence. We connect through music and love," Banks continued, commenting on the double standard BDS supporters have when it comes to holding Israelis disproportionately responsible for political events compared with the citizens of other nations.Banks went on to say in unequivocal terms that giving in to BDS demands would be singling out Jews for boycott: "Me cancelling my concert would be totally anti-Semitic and I'm not going to EVER make any of my fans feel like they don't have a place in my heart. I'm going to Tel-Aviv to rock out with my kunts and that is THE END OF THE DISCUSSION." 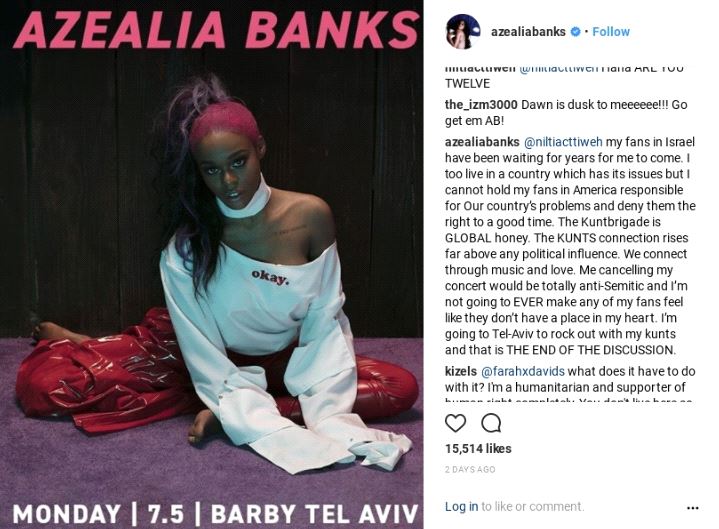 Screenshot from Azealia Banks's Twitter, captured February 20, 2018.Banks refers to her army of fans as "kunts" in her "kuntbrigade," which includes an Israeli swarm that is ready to offer her an enthusiastic welcome in May.Banks's original announcement on Instagram drew nearly 16,000 likes.
"Wallace" by Azealia Banks (Youtube/EA - VideoEDITS)


“TEL AVIV , ISTANBUL, SEOUL, LONDON , TOKYO”!!!! ISRAEL - IM COMING FINALLY!!!!!! , now all I need is a show in Seoul to complete the prophecy of my WALLACE lyrics !! July 5th. Save the date! Ticket link on Monday," she wrote.The concert will actually take place in May, though Banks seems to have been confused by the Israeli method of writing days before months in numeric dates. Banks was referring to a line in her song "Wallace," which states: "Tel Aviv, Istanbul, Seoul. London, Toyko... Dawn is Dusk to me... Believe it yep."In contrast, New Zealand pop star Lorde is still under fire for caving to BDS pressure and cancelling a scheduled concert in Israel. In response, Florida State Representative Randy Fine has called on state government to bar Lorde from performing in Florida, stating “The taxpayers of Miami and Tampa should not have to facilitate bigotry and antisemitism.”