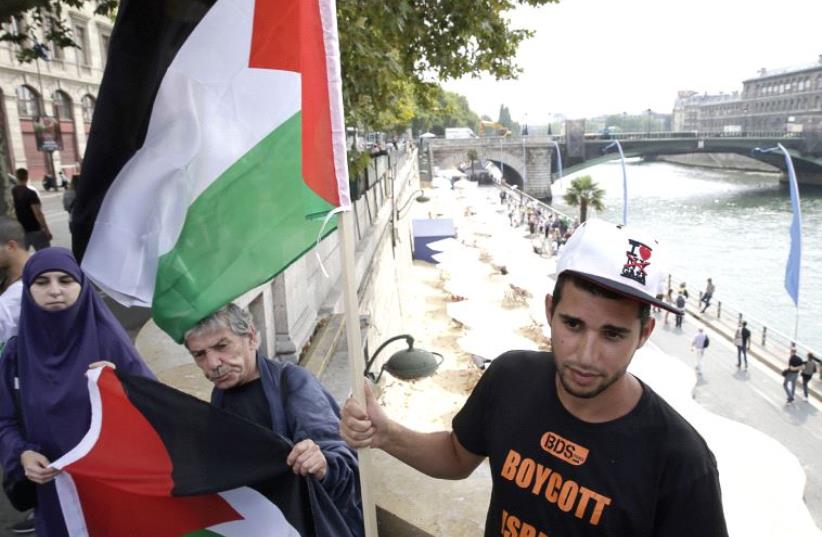 A man wearing a T-shirt of the BDS movement holds a Palestinian flag during a protest against the ‘Tel-Aviv sur Seine’ beach attraction in central Paris last summer
(photo credit: AFP PHOTO)
Advertisement
AMSTERDAM — The umbrella group representing Dutch Jewry accused a pro-Palestinian former prime minister of antisemitism.The Central Jewish Board of the Netherlands, or CJO, in a statement Wednesday made the explicit allegation for the first time against Dries van Agt and the Palestinian advocacy group he founded called The Rights Forum.Van Agt, who served as prime minister from 1977 to 1982, has fought accusations of anti-Semitism since the 1970s.CJO’s claim was over statements it said van Agt made last week at a Utrecht event organized by the Young Socialists in Dutch Labour that the party “is good for the Palestinians despite the strong Jewish lobby” in its ranks.The assertion was part of a CJO statement calling out van Agt for his advocacy group’s rejection of a letter sent last month to Dutch Prime Minister Mark Rutte by the leaders of the Reform and Conservative Jewish communities in the Netherlands in which they complained of antisemitism within the Boycott, Divestment and Sanctions movement against Israel.In the letter warning of the mainstreaming of antisemitism in the Netherlands, the seven communal leaders from the Dutch Union for Progressive Judaism wrote that “BDS activists with clear anti-Jewish messaging in the Netherlands are allowed to operate freely in churches and universities.”In response, The Rights Forum said there was no evidence of such messaging — a claim CJO said was “almost laughable.”CJO cited van Agt’s statement on the Jewish lobby and others, including shouts about killing Jews documented at a demonstration organized by BDS activists in Rotterdam earlier this year.CJO also said that The Rights Forum itself featured “a range of expressions that are offensive, harmful and/or outright anti-Semitic,” specifying 14 examples of comments made on its Facebook page in the couple of weeks.A Right Forum supporter, Karel de Lange, wrote November 26 on the page that Jews are “Khazar criminals.” Another, Gert Van Der Straaten, wrote November 14, “I’m slowly getting sick of the whole ‘Jewish people.’”Van Agt has claimed anti-Semitic accusations against him and his group are the work of Israel advocates seeking to stifle criticism of the nation.He has compared Israel to Nazi Germany and in 2008 spoke at a rally in Rotterdam that featured a televised address by a leader of Hamas. Van Agt has said that the Jews “should have been given a piece of land” in Germany instead of the historic Land of Israel.As justice minister in the 1970s, he cited his “Aryan” roots in explaining his plan to pardon four Nazi war criminals due to health reasons.