Hundreds turn out for anti-Israel march in London 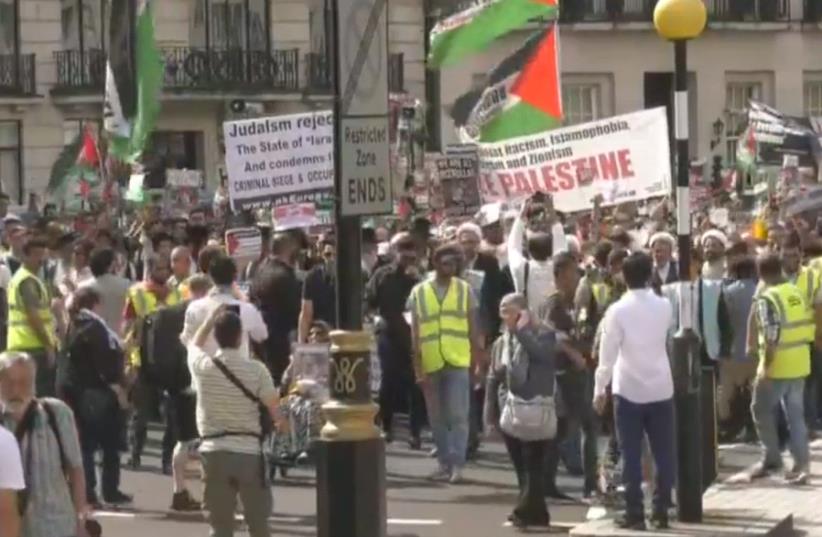 Participants in London's annual Al Quds March in support of the Palestinian people
(photo credit: screenshot)
Advertisement
Several hundred people took part in the controversial anti-Israel “Al Quds Day” March in London on Sunday.Waving Palestinian flags and shouting cries of “end the occupation” and “Boycott Israel,” the participants came out to protest Israel's existence and accuse the Jewish state of maltreatment of the Palestinians in the West Bank and Gaza.The crowd – made up of local Muslims, ultra-Orthodox Jews belonging to the anti-Zionist Naturei Karta sect and left-wing activists – marched down the road, carrying signs and banners accusing Israel of genocide and ethnic cleansing, all under the watchful eyes of scores of police officers.A smaller counter-protest was held by Israeli supporters, mostly members of the local Jewish and Israeli community, but also included right-wing activists who yelled “terrorists” toward the marchers. Police managed to keep the sides separated to prevent clashes.Pro-Israel advocates had called on London Mayor Sadiq Khan to cancel the rally in the British capital due to concerns that the march displayed images of antisemitism and terrorism. Nearly 10,000 people signed a petition to have the march canceled.“After the terrible recent terrorist events in Manchester and London, this display of extremism has no place on the streets of the UK,” stated the petition launched by the North West Friends of Israel. “Allowing this march to go ahead will send a worrying message to the UK’s Jewish community and call into question the commitment of the Mayor of London to eradicate extremism and antisemitism.”The online appeal culminated by urging London's mayor to ban the “Al Quds Day” march, and pointed to Khan’s previous condemnations of terrorism in urging him to demonstrate “that your words are backed up by your actions.”