"We will work with our friends in the government and opposition to end continued funding, which originates with Spanish taxpayers who oppose terror with all their hearts, for pro-BDS groups."

By BENJAMIN WEINTHAL
JUNE 28, 2017 18:37
PEOPLE TAKE part in a protest against Israel in Malaga, Spain, on August 8. The words on the shirt read ‘Netanyahu must be judged. Second Zionist-Nazi Holocaust.’
(photo credit: REUTERS)
Advertisement
The Jerusalem-based NGO Monitor and Yesh Atid chairman Yair Lapid launched dual criticisms on Wednesday of Spanish government funds for anti-Israel NGOs in the country’s parliament in Madrid.“I am here to deepen the understanding of the Spanish leadership – that the anti-Israel BDS movement supports terror and pushes peace between Israelis and Palestinians further away,” Lapid said, using the abbreviation for Boycott, Divestment and Sanctions.“We will work with our friends in the government and opposition to end continued funding – which originates with Spanish taxpayers who oppose terror with all their hearts – for pro-BDS groups, Olga Deutsch, director of NGO Monitor’s Europe desk, said. “For years, NGO Monitor has warned of the European funding processes that enable NGO antisemitism, incitement and BDS. MK Lapid understands the seriousness of our findings, and we thank him for contributing to this important dialogue with his fellow parliamentarians in Spain.” 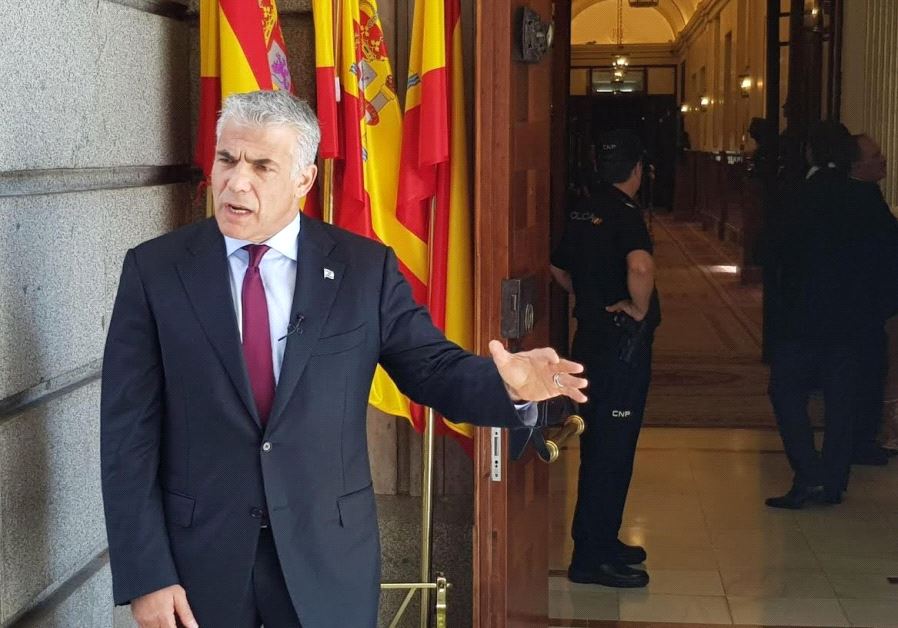 According to a joint report titled “Spanish Funding to NGOs Active in the Arab-Israeli Conflict,” by NGO Monitor and the pro-Israel NGO ACOM, Spanish “funding designated for NGO activities in the Arab-Israeli conflict amounted to over €5.1 million in 2015 alone, with the largest centralized donor being the Agency for International Development Cooperation.”The report noted, “Several Palestinian beneficiaries of direct funding from the Spanish government have ties to the Popular Front for the Liberation of Palestine (PFLP), a terrorist organization designated as such by the US, EU, Canada, and Israel. The PFLP has been involved in suicide bombings, hijackings, assassinations and other violence targeting civilians.” In May, the city of Barcelona paid money to a left-wing NGO to host the convicted PFLP terrorist Leila Khaled at a literary festival.Ambassador to Spain Daniel Kutner told The Jerusalem Post at the time: “I hope [Khaled] will not be allowed to set foot in Europe in general, and in Spain in particular. I raised the subject of her scheduled participation in an event in a city-managed venue with the higher authorities at Barcelona, conveying our position on the subject.”The Jordan-based Khaled is a member of the PFLP, which has been designated by the United States and the European Union as a terrorist organization. She hijacked TWA Flight 840 in 1969 and a year later participated in the attempted hijacking of EL AL Flight 219. The joint NGO Monitor-ACOM report said “a number of Spanish NGOs receiving government funding support BDS campaigns that target Israel economically, culturally and academically, and collaborate with Palestinian NGOs associated with the PFLP terrorist organization. Beyond waging delegitimization campaigns against Israel, these NGOs often promote libelous claims that echo antisemitic themes or endorse violence against civilians.”Deutsch said, “Our event in Spain follows important debates and policy changes in Switzerland, Denmark and Norway. Our local partners, including ACOM in Spain, have been instrumental in these successes.”The NGO Monitor-ACOM report is available in Spanish and English on the NGO Monitor website.A spokesperson for Spain's foreign ministery wrote the Post by email on Thursday:
"The Spanish government has a consistent, official and long-standing position against BDS.The government of Spain does not fund NGOs as such, but only projects individually considered. None of these projects promote boycott of Israel or work against the peace process. The Spanish authorities are open to look into any information provided by its counterparts. As far as the peace process is concerned, that was precisely launched at the Madrid Peace Conference, 1991, Spain is strongly committed to the two-state solution and looks forward the relaunch of peace talks."