Flores Cervantes spoke in Spanish in response to a question about the Boycott, Divestment and Sanctions movement. 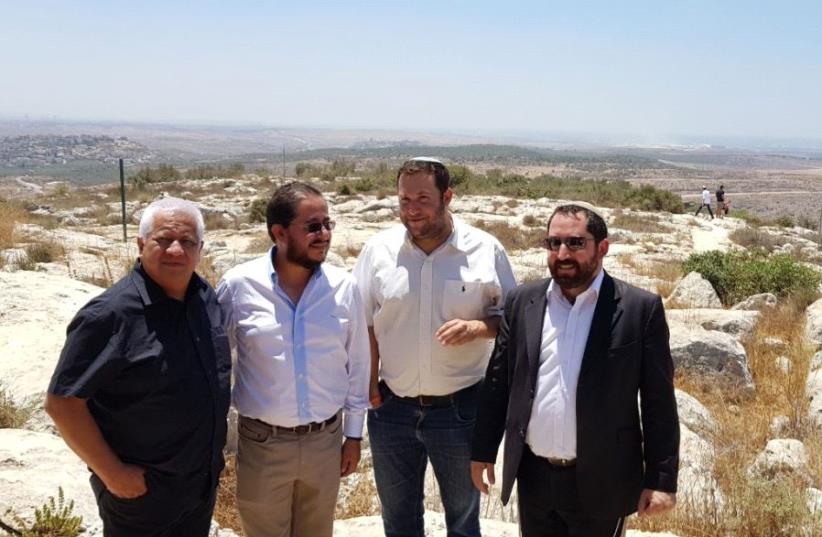 Mexican leaders and Samaria Regional Council head Yossi Dagan, July 2017
(photo credit: ROI HADI)
Advertisement
There should be no discrimination against West Bank settlement products, Mexican politician Hugo Eric Flores Cervantes said on Sunday during a visit to Samaria.“Those who consider that the factories here are not producing products made on Israeli territory, are mistaken. There is no territory that is more Israeli than here,” Flores Cervantes said, adding that any other understanding is a historical mistake.“Products should be exported from here to any place in the globe in the most open way possible,” he said.Flores Cervantes was speaking in Spanish in response to a question about the Boycott, Divestment and Sanctions movement. His words were translated by Yossi Eldar, vice president of the Israel-Mexico Chamber of Commerce.“Trade between nations must and should be free,” Flores Cervantes said. “I am in favor of accelerating the trade agreement between Mexico and Israel as well as accelerating the marketing of products produced in Judea and Samaria to Mexico.”He is the founder and head of the Social Encounter Party and serves in the Mexican Congress. “We are evangelical Christians and pro-Israel,” he told The Jerusalem Post in describing his party.“The Mexican Congress has the ability to accelerate commercial ties, and I, through my party, will ask the Congress to insure that Mexico buy products produced in Judea and Samaria,” Flores Cervantes said.While in Samaria, Flores Cervantes visited the Barkan Industrial Park and spoke with its regional council head Yossi Dagan about ways to improve the region’s commercial ties with Mexico.“I feel the growing support from Mexico,” Dagan said.Mexico has the 14th largest Jewish community in the world. Because of the community’s history of being largely descended from Spanish converts, estimates of the number are hard to come by. Various sources quote ranges of anywhere from 40,000 to 67,000.Israel established ties with Mexico in 1950 and has had a free trade agreement with it since 2000. It is Israel’s second-largest trade partner, while Israel is Mexico’s 42nd-ranking trading partner and its largest in the Middle East. In 2016 trade between the two countries amounted to some $905 million.Flores Cervantes said he wants to make sure the Israel-Mexico free trade agreement applies to products produced in Judea and Samaria.