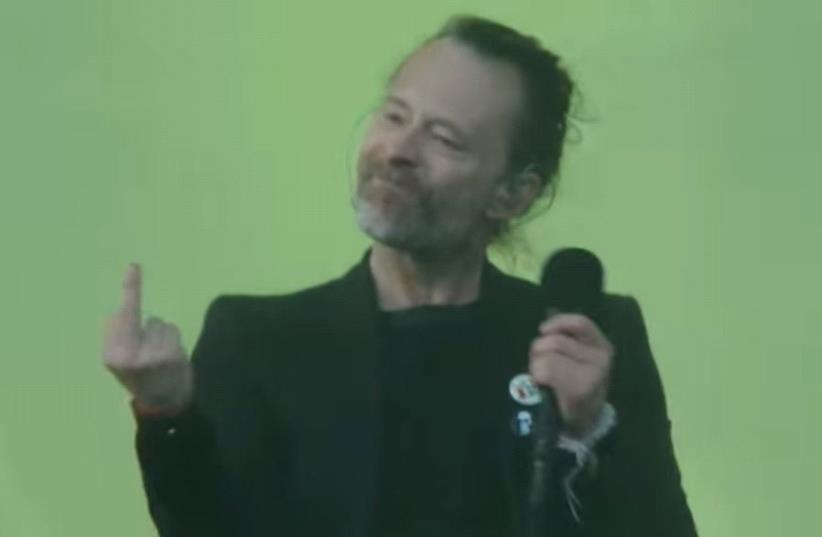 Radiohead's Yorke gives BDS supporters the finger during Glasgow concert
(photo credit: YOUTUBE SCREENSHOT)
Advertisement
Just a week and a half before they’re scheduled to perform at Tel Aviv’s Yarkon Park, English rock band Radiohead continued to battle the anti-Israel Boycott, Divestment, Sanctions (BDS) movement. During the band’s Friday night concert at the TRNSMT Festival in Glasgow, Scotland, several activists raised Palestinian flags as well as a “Radiohead: #canceltelaviv” sign, and held demonstrations outside the venue, causing lead singer Thom Yorke to respond.According to Consequence of Sound, prior to the band’s performance of “Myxomatosis,” Yorke reportedly exclaimed, “Some f#cking people!” while staring out into the crowd. He was also caught giving the middle finger to the flag wavers.Radiohead have faced a number of protests over their decision to play Tel Aviv, including at an event in Glastonbury, England last month.

#Radiohead fans in Glasgow at #TRSNMTfest called on the band to respect the cultural boycott of Israel in solidarity with Palestinians #BDS pic.twitter.com/Ts7OZmlOp2
— Hilary Aked (@hilary_aked) July 8, 2017


Speaking recently to Rolling Stone, Yorke described the situation as “offensive” and “an extraordinary waste of energy,” saying: “I don’t agree with the cultural ban at all, along with J.K. Rowling, Noam Chomsky and a long list of others...There are people I admire [who have been critical of the concert] like [English film director] Ken Loach, who I would never dream of telling where to work or what to do or think.”Yorke called it “patronizing in the extreme” to presume Radiohead is unfamiliar with the Israeli-Palestinian conflict, pointing out that guitarist Jonny Greenwood’s wife is an Israeli Jew.