Would Israelis save a Palestinian child from a lion?

The third installment of the Fake News Street Quiz from the Israeli ministry to see what made up 'facts' people will really believe about Israel. 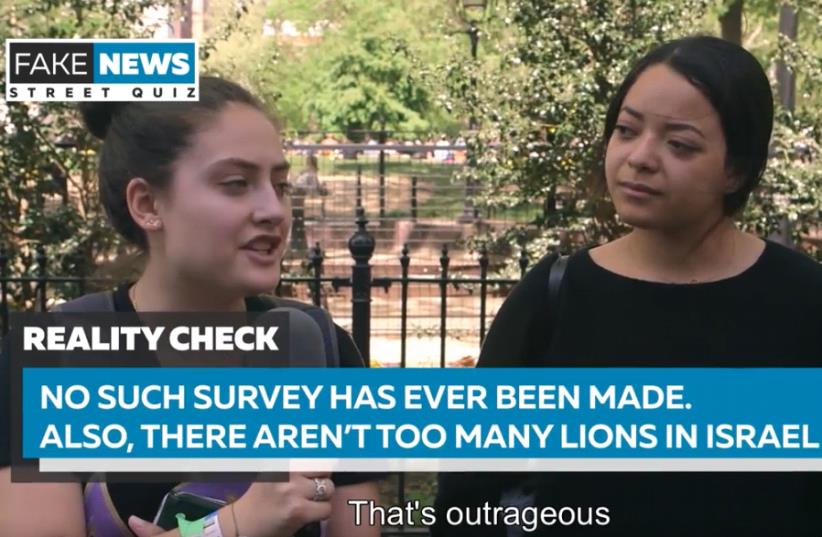 Fake News Street Quiz
(photo credit: screenshot)
Advertisement
The Israeli Ministry is working hard to combat anti-Israel and antisemitic attitudes that people have because of campaigns such as BDS (Boycott, Divest, Sanction) which are known for spreading misinformation and half-truths about Israel to 'promote' their own agenda. In addition to the Act.IL app, the ministry has set up the 4il.org campaign that provides resources and information on how to better inform those who have been persuaded by the misinformation of anti-Israel organizations.
Lesson 3 in Fact checking- Lions Eating Palestinians & Israel"s National Anthem
The #FakeNews Street Quiz campaign asked students in the US to respond to made up 'facts' about Israel, and to expose the anti-Israel bias that many seem to hold. In Lesson 1, people debated Israel's agreement with North Korea to transfer Palestinian prisoners (#FakeNews), and lesson 2 featured reactions to the IDF's destruction of the Gaza pyramids (also #FakeNews).