Time is on Kim Jong-Un's side

By DANIEL SLEO GIOSUÈ SMITH
Advertisement
As Trump threatened Pyongyang with “fire and fury, the likes of which the world has never seen”, the world froze for a few days and wished for anything other than war, as it would likely result in the deaths tens of thousands of innocent humans and unimaginable nuclear fallout.  This week the rhetoric tuned down with Rex Tillerson and Jim Mattis arguing for diplomacy through China, while Kim Jong-Un balked on striking Guam.  This is seemingly good, however it marks no real progress in denuclearizing the North.  Through all of our countless attempts at diplomacy, we are now closer to war then we’ve ever been.  In that regard, I’m here to remind you that there is a much more grave alternative than war today, and that’s war in the future. 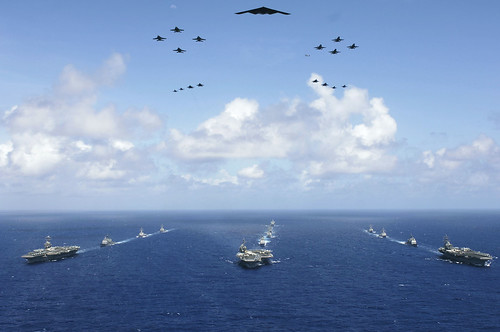 It doesn’t take a professional historian or political scientist to realize that diplomacy of the past have failed miserably.  We’ve talked, sanctioned, and pushed China, and simultaneously North Korea has improved its nuclear arsenal remarkably.

Yet Jim Mattis, Rex Tillerson and Donald Trump still believe the denuclearization of the Korean peninsula will be achieved through Beijing.  They seem to ignore that China has interests far divergent from America’s, and derives many geostrategic advantages from a nuclear-armed North Korea.  Xi’s foremost goal is to become the main hegemon in the pacific theatre, and a nuclear North Korea is a pawn in achieving that.

For example, Niall Ferguson, a fellow at the Hoover Institution, told me that he guesses “ Trump is tacitly going to concede on South China Sea to get a win on North Korea."

If this is true, why would China act decisively until such a concession is made?  Putting off dealing with North Korea, therefore, works for Beijing’s interests and against Washington’s.

Similarly, Beijing has pushed the US to halt all military exercises in the South, and perhaps abandon it altogether, in return for an immediate freeze to North Korea’s nuclear weapons program.  The US and South Korea still plan to go forward with their annual Ulchi-Freedom Guardian annuls "war games", starting on August 21st and lasting for ten days.  This is likely to provoke the North, and perhaps motivate them to test missiles, as they've always seen the exercises as preparation for an invasion.  China told South Korea to reconsider going through with the drills in lieu of recent developments.

China sees America as being just as guilty as North Korea for perpetuating hostilities in the region.

The idea that Beijing would act decisively enough, which would mean cutting off most oil exports to North Korea, is ludicrous.  Besides, no one wants to do is destabilize an already unstable nuclear power.

Even so, it’s not apparent that Beijing could halt North Korea’s nuclear program even if it wanted to.  North Korea is proud of it’s sovereignty, and nothing is more important to Kim Jong-Un than his sacred nuclear program.

Plus, for decades we’ve been trying to push Beijing to solve the crisis.  It never has worked, and it never will.

Another diversion from dealing with the issue are sanctions.  UN sanctions of all kinds, including the most recent resolution, won’t curtail the regimes development of nuclear missiles.  According to a Global Times editorial from last week: "External sanctions will only delay North Korea's development of nuclear weapons and missiles, but cannot crush the determination of Pyongyang to stick to this path. Why does US society keep silent about such a simple and tested fact?"

In short, there is no diplomatic way of freezing the North’s nuclear program, short of abandoning all of our bases in East Asia and perhaps even our own nuclear weapons, both of which will never happen.

As tensions defused this week, many were relieved and diplomatic initiatives appear to have found new life.  However we must avoid taking this as a win, as nothing achieved has halted North Korea’s nuclear program in any way.

Time we spend trying and failing to get China to act, implementing sanctions and so forth is more time that Pyongyang can utilize to advance their nuclear apparatus.  And you best believe they won’t waste a second.

If these measures don't make Pyongyang denuclearize, and they won’t, than what options do we have?

1.)  We allow North Korea to become a nuclear power with the means to devastate the US, and make friendly and unfriendly overtures to ensure that they never do.

2.)  We take military action to seize or destroy of all of their nuclear facilities in a single afternoon

Unfortunately, those are our only two options.   The belief still held by many that Kim Jong-Un would ever surrender his nuclear program voluntarily is, to quote Mark Twain, “passing strange.”  What makes us think that the next ten years will be any different from the past three decades?

Clinton, Bush and Obama proved that diplomacy, though it sounded good at the time, effectively left this problem to future administrations.  Had they been wise, they would have foreseen trouble and dealt with it at once, however they did no such thing and now the consequences of military action are far more grave.

So as catastrophic as war would be today, there is a worse alternative, and that’s war in the future.

Imagine for a moment that we keep dancing around the core issue, writing op-eds condemning China, talking tough but not following through, and five years from now we find ourselves in the exact same stalemate.  Except for this time, North Korea has 20 nuclear-tipped missiles that can reach any city in America.

Trump gets re-elected, tensions heat up, and we finally decide to act decisively, except we miss a few targets.  North Korea, foreseeing trouble, launches missile after missile at the US, not to mention Seoul and Tokyo, killing millions of Americans, Japanese and Koreans.

Here’s my suggestion:  We draw an immediate red line and declare that any verifiable future attempts by North Korea to advance their nuclear weapons facilities will be treated as an act of war, and upon the moment of discovery, all of their nuclear facilities, submarines and bases will be destroyed immediately.  This includes any missile tests or drawing up of plans to attack a US territory or ally.

If this is at all violated, the young leader has proven himself to be suicidal, and therefore we must act immediately.   The cost will be high, however it will be much lower than the cost of future wars, which through his suicidal tendencies Kim would have proven to be inevitable.

On the other side of the coin, we should offer aid to Kim and make some concessions and strict security guarantees if he’ll abandon his nuclear weapons.  Perhaps North Korea and China could sign a renewed treaty assuring North Korea of it’s backing in any event of unprovoked aggression from an outsider.

At the end of the day, Kim isn’t pursuing nuclear weapons.  He is pursuing security, so if the international community can assure him of that, he’ll no longer have a reason to proliferate.

However, it’s not clear that he would ever do such a thing, given that his country is sworn to America’s destruction.  Therefore, we must be prepared to act, and act decisively, in order to end this problem once and for all.

If war is indeed inevitable, we’re only avoiding it to North Korea’s advantage. We must make it clear that either Kim Jong-Un denuclearizes or we do it for him, and that there isn’t a third way.

Failing to deal with this in the present moment makes every American worse-off.  Time is on Kim Jong-Un’s side, not ours.