Maze cartoon of Iran and Turkey as a couple kissing at sunset. 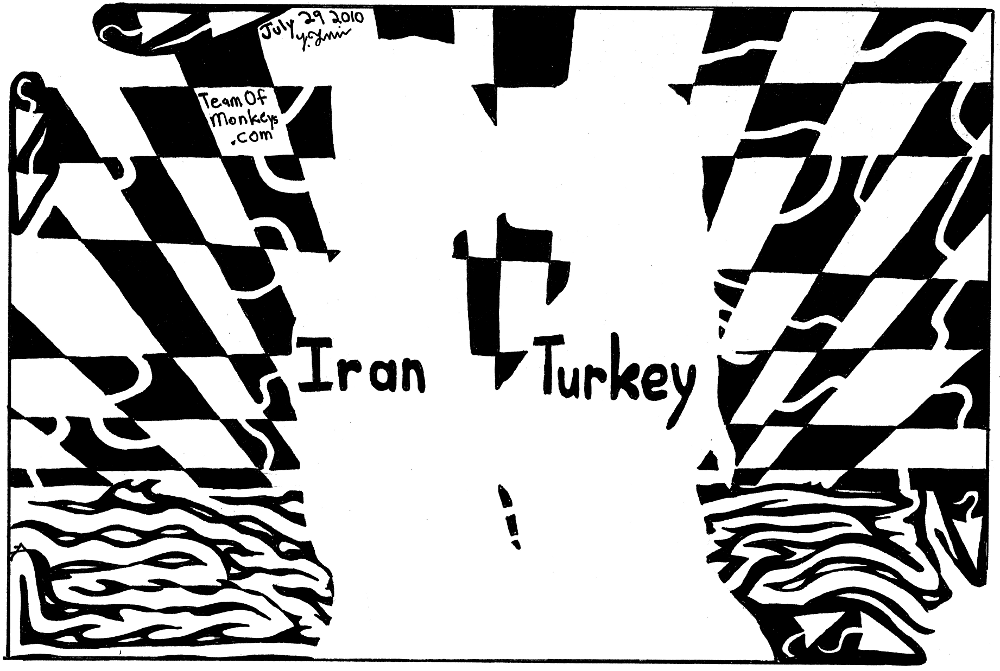 maze cartoon psychedelic kissing couple iran and turkey
Maze cartoon of Iran and Turkey as a couple kissing with a psychedelic sunset behind them. By Yonatan Frimer Click here for a printable, hi-res version of this maze
Click here for the maze solution of Couple Kissing at Sunset
More on this maze cartoon''s topic in the news
Turkish-Iran Relations: Old Rivals or New Best Friends?Many in the West are increasingly concerned about a Turkish-Iranian alliance against the US and Israel. However the two countries, despite their increasingly closer political and economic ties, compete over the leading position in the Middle East and for the favor of the Arab masses. For the moment the competition is materializing in pro-Palestinian endeavors like the so called "freedom flotillas" and fiery speeches against Israel by Turkish Prime Minister Recep Tayyip Erdogan and Iranian President Mahmoud Ahmadinejad.
On June 29, 2010, Ankara, in a first sign of frustration, called on Iran to return "as soon as possible" to the negotiating table over a nuclear fuel swap deal. According to a senior Turkish diplomat, Turkey voted against tougher UN sanctions under the condition that Iran would engage itself in talks on its controversial nuclear program. However, on June 28, 2010 Ahmadinejad announced that any negotiations will be postponed until late August in order to "punish" Western powers. Tehran left it unclear when and if it will continue to talk with Brazil and Turkey, its two allies.
Click here to read the full article from the source
Advertisement
Subscribe for our daily newsletter