In a previous posting relating to the new agreement signed between the Palestinian Authority and the Hashemite Kingdom of Jordan regarding the patronage of the King over the Holy Sites in Jerusalem, I was a bit puzzled by this paragraph:

which custodianship was affirmed to Al Sharif Hussein Bin Ali by the people of Jerusalem and Palestine on March 11, 1924

I see now that Professor Ruth Lapidot has published an article on this agreement in the Israel Journal of Foreign Affairs, VIII:3 (2013) and she references on this point a book(let) The Keys to Jerusalem published in 2010 in Jordan by the Royal Islamic Strategic Studies Center. 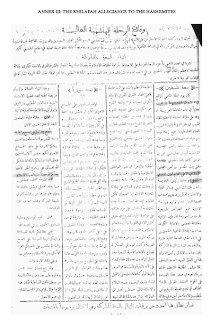 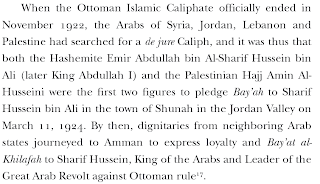 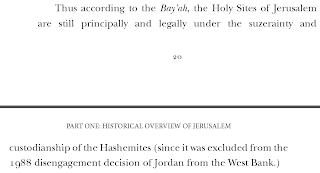 Whether or not the Holy Sites were included in the ''disengagement decision of 1988, - which only related to Jordan and the PLO, as the Palestinian Authority did not exist then, and therefore, that is a different legal consideration, - the 1994 Jordan-Israel Peace Treaty contains this:

The Holy Sites are very much included, as "Muslim Holy shrines", but exactly what are they and where and what about Jewish shrines, especially the Temple Mount, which shares much, but not all, of the area the Haram courtyards do, are unclear issues. Is Jordan violating the treaty?Does not Israel also have a responsibility to assure access and worship there?Does that Bayah hold, also given that the so-called Caliphate lasted from that March to ... October.  Is that a sufficient time to grant any sort of continuity?  What happened in October?As noted:

A last attempt at restoring the caliphal office and style with ecumenical recognition was made by al-Husayn ibn `Ali al-Hashimi, King of Hejaz and Sharif of Mecca, who assumed both on 11 March 1924 and held them until 3 October 1924, when he passed the kingship to his son `Ali ibn al-Husayn al-Hashimi, who did not adopt the caliphal office and style.

So, the Caliphate ended.  No more patronage of the Holy Sites in Jerusalem?  Is this Bayah a mere ploy?Another Arab point of view on the matter is expressed so:

For Jordan, the dilemma is in maintaining a balance between its historic obligations towards Jerusalem and the 1994 peace treaty with Israel. In fact, it is more of a test of endurance.  In April this year, Jordan and Palestine signed an agreement under which the Palestinian side “reaffirmed” the status of King Abdullah as the custodian of the holy sites in Jerusalem.Aside from the consideration of “who is stronger than who,” Jordan is definitely unwilling to terminate the Wadi Araba Peace Treaty with Israel and at the same can not remain silent on Israel’s assaults on al-Aqsa Mosque and its violations of the 1994 agreement in which the kingdom is stipulated as the official custodian of Jerusalem’s holy sites. It is such a big diplomatic challenge.

Wait, has the treaty "stipulated [Jordan] as the official custodian of Jerusalem’s holy sites"?  Is that true?Of course not.  Just a "special role".  Perhaps as an observer, or a supervisor of engineering works, or as a payer of the Waqf employees salaries. But not sovereignty.  And not the term "custodian". This view takes an opposing stand, understandably:

Article 9 also suggests that Arab riots over the Temple Mount could be illegal. Certainly, lawyers will have to decide if a signed international Treaty establishes enforceable law. They will have to determine if a violation of the terms of such an Agreement should be called ‘illegal.’But until then, Arab rage should be condemned by all.

Yes, Jordan is an interested party.  But its rights, and demands, are limited.

And if it can''t even protect its own officials at the site accompanying a Fatah person, as happened recently, why should Israel respect it?And if it does not assist Israel in assuring the freedom of religious worship (in 2009 the country joined radical Islamist Sheikh Raas Salah to denounce Israel''s protection of freedom of access to the Temple Mount!) and does not promote interfaith relations, well then Jordan is out of the picture.Does this fit with the peace treaty -

State Minister for Media Affairs, Mohammad al-Momani, renewed Jordan''s warning that repeated Israeli attacks and unilateral measures on Muslim and Christian holy shrines as well as settlement policies threaten to undermine the peace process. The minister, who is also government spokesman, stressed that Israel''s practices against holy places are rejected and condemned and run contrary to international conventions and treaties, saying Israel should stop its ongoing violations of the holy city. He warned that Israeli occupation authorities insistence to allow Jewish extremists to break into the Al-Aqsa Mosque is inflaming Muslim passions and could touch off religious conflict.