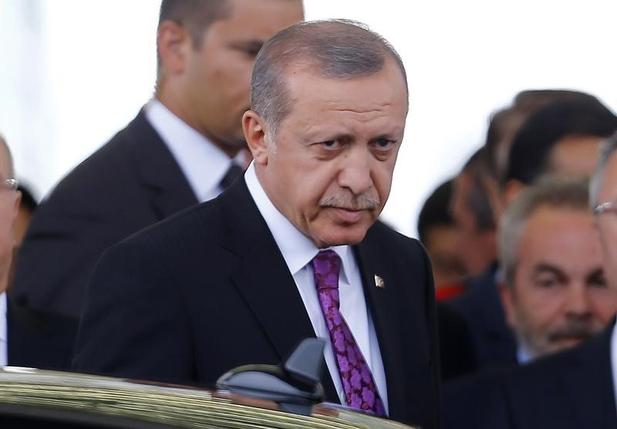 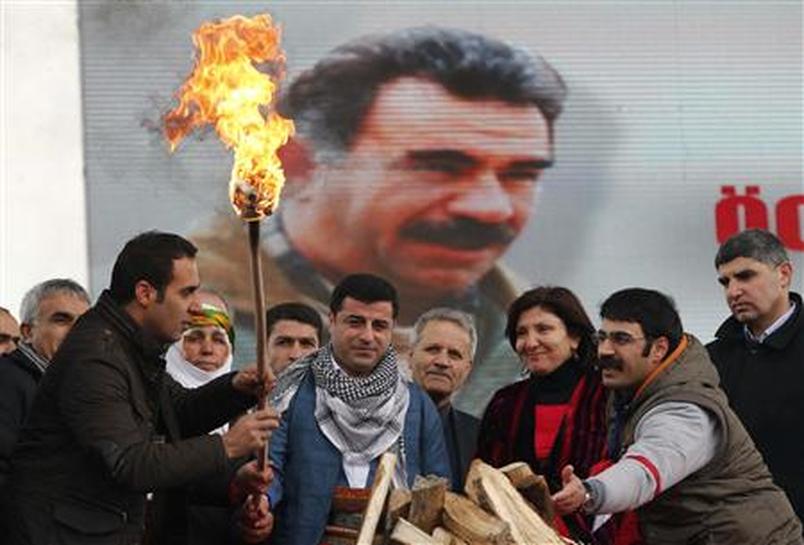 1st photo, Erdogan on left. 2nd photo, Demitas in center in blue jacket
President Erdogan has accused the Kurdish People’s Party or HDP of being an extension of the People’s Workers Party or PKK. Such an accusation wouldn’t make the HDP so different from Sein Fein – the Irish extension of IRA terrorist group that was eventually able to sign onto a successful peace agreement in Ireland. Whether the accusation is true or not is hard to say and even if it had some element of truth to it, Erdogan’s accusation follows on the heels of HDP leader, Selahattin Demirtas, calling for the PKK to disarm. It’s quite possible that either or both politicians are disingenuous and are merely staking out positions while a coalition government is being formed but why should President Erdogan care if the HDP is the political extension of a terrorist organization?
When Erdogan supports Hamas and he doesn’t just support them he drinks the lemonade. Hamas makes little secret that their policy is to target innocent civilians for murder and to run Gaza as a giant human shield and yet Erdogan believes they a legitimate political party. Forget the HDP, why doesn’t Erdogan just embrace the PKK? The PKK are not firing Qassam rockets into civilian areas of Turkey and even if they were why Erdogan would care as that is why legitimate political parties do in his opinion.
One could argue that it’s because Erdogan care’s about the territorial integrity of Turkey and the PKK and other parts of Kurdistan could break away and form their own republic but Erdogan supports the Northern Republic of Cyprus and he supports forming states on Israeli land so why does he care if the PKK and more importantly the Kurds realize their dream of being free and free of Turkey. Rather than hate the PKK, shouldn’t he be offering them Turkish held lands? Of course Turkey did try to make peace with Cyprus and Greece didn’t go along but why didn’t Turkey just pull out, sure Greek Cyprus didn’t make peace but unlike Hamas they don’t make war either. Just go.
Demirtas’ crime here is that he wants the HDP and by extension the Kurds in Turkey to be patriotic citizens that do not bear arms against the state and if the PKK are running the HDP show then this either means there is a split between the HDP and the PKK or the HDP is representing the desires and intentions of the PKK. What’s not for Erdogan to fall in love with? It’s not like the President is against the treaty with the terrorist state of Iran and is determined not to trade with Iran on principle. So why push away the HDP when the President of Turkey is more than willing to support terrorism in Israel, the Muslim Brotherhood with its’ very spotty record and Turkey has been accused of colluding with ISIS just to hurt the Kurds. If Erdogan has a criticism for the HDP and PKK it should be they are not terrorist enough anymore to be respected and in fact that is his message to the PKK whether he realizes it or not.  What could possibly be the downside of a message like that?
President Erdogan would be wise to embrace Demirtas rather than keep making the case for the Kurds to break away from Turkey. Erdogan and Demirtas ought to have a political marriage and for their exchange of vows the both of them could renounce terror.