Large geopolitical and geo-economic projects are being implemented one after another in the South Caucasus region. The Baku-Tbilisi-Ceyhan oil and the Baku-Tbilisi-Erzurum gas pipelines, important to countries themselves as well as to Israel and European states, run through this region. A couple of days ago another crucial project, the Baku-Tbilisi-Kars railway project, which is an integral part of the Transcaspian international transport route and the New Silk Road project, was inaugurated.

The project, which will connect the railways of Azerbaijan, Georgia and Turkey for the first time, has began on 2007 with the signing of an intergovernmental agreement between the three countries. A year later the Turkish section of the road was laid in Turkey on July 24, 2008. The project envisaged the complete reconstruction of the railroad in Azerbaijan and Georgia from Marabda to Akhalkalaki and the construction of a completely new infrastructure in the Akhalkalaki-Kars.
It should be emphasized that Azerbaijan took up the role of the main ideologist, initiator and the true driving force of this global project. Specifically, Azerbaijan granted a loan of $775 million to finance the implementation of the project in the territory of Georgia.
Carriers from China, Central Asia and Europe eagerly anticipated the opening of the BTK line. After all, a new railway will slash the time of transportation of goods to about 12-15 days from 40-45 days, while transportation fees for the supply of oil products and dry cargoes to the Turkish market will be noticeably reduced. The line will have the capacity to transport one million passengers and 5 million tonnes of freight at the initial stage. Passenger transportation is expected to start in 2018. The route can also be used to supply liquefied gas to Turkey from the Caspian countries, oil products from Turkmenistan and Azerbaijan and, of course, container shipments from China. This is indicative of the involvement of other countries in the project.
Of course, Azerbaijan will take much profit from this project since it is not only the initiator of the construction of this railway line, but also its key investor. The head of the Azerbaijani state noted that guests from fraternal, friendly countries came to solemn event. He particularly welcomed the President of Turkey Recep Tayyip Erdogan, the Prime Ministers of Georgia, Kazakhstan and Uzbekistan Georgy Kvirikashvili, Bakytzhan Sagintayev and Abdullah Aripov, heads of ministries from Tajikistan, Turkmenistan, and expressed deep gratitude to them for their participation in the ceremony. 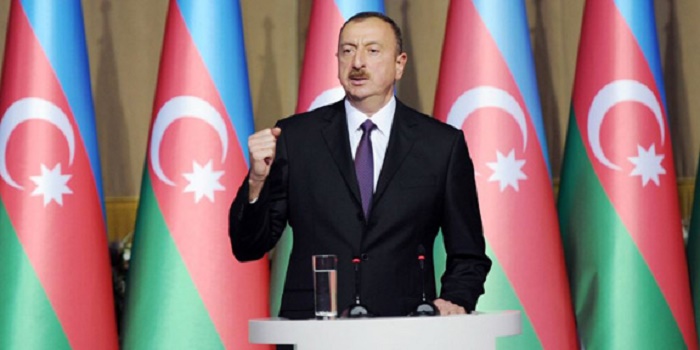 Image result for ilham aliyev baku tbilisi kars   Addressing the BTK inauguration ceremony, Azerbaijan's President Ilham Aliyev described the railway as “a historical project of strategic significance”. “The Baku-Tbilisi-Kars railway is the shortest and most reliable route connecting Europe with Asia. At the first stage, it plans to transport 5 million tons, at the next stage - 17 million tons, and in the future even more cargo. It is becoming a vital part of the Eurasian transport map. Thanks to this road, the trade and mutual investment between the countries involved will increase. The cooperation among all the countries using this road will deepen further. This road will serve stability and security of the region,” Ilham Aliyev said.
Azerbaijan is the initiator of the BTK railway project. The country ensures economic, transport and energy security of the European continent and the countries where freight will be delivered through this shortest route linking Asia with Europe. Therein lies its economic essence and political significance. And, most importantly, this is the great success of Ilham Aliyev's foreign policy strategy and his country, and no one should doubt this.
The BTK is a striking example of how friendly neighboring countries – Turkey, Azerbaijan and Georgia – can use their potential properly and pragmatically to ensure both their own development and development of the whole region. This close and promising alliance is not directed against any state. Only Armenia, because of its own fault, remained isolated from this major regional project, and ended up losing.
Armenia's using the Baku-Tbilisi-Kars railway has been discussed by the Armenian society recently. Commenting on these reports, spokesman of the Azerbaijani Foreign Ministry Hikmat Hajiyev said Azerbaijan has repeatedly stated that Armenia will be able to benefit from regional integration opportunities only after the Armenian troops withdraw from the occupied Azerbaijani territories.

Image result for ilham aliyev baku tbilisi kars
While Azerbaijan is developing and strengthening due to its economic policy, Armenia cannot get rid of its occupation policy, which is directed against its neighbors. At least Azerbaijan has never really concealed that for him this global project - apart from the economic one - has political significance, and is aimed at strengthening Armenia's isolation. The occupation policy of Yerevan largely turns against Armenia, which is completely isolated from all geopolitical and geo-economic projects in the region. Armenia has been for more than a year already behind the fields of regional integration of the South Caucasus, and the Baku-Tbilisi-Kars railway is one of the key manifestations of this. Isolated in the South Caucasus region, Armenia, because of the occupation of the Azerbaijani lands, was left out of major geo-political and geo-economic projects relating to gas and oil resources of the Caspian Sea, and now lost the chance to join a major regional transport project.

Armenia is very dependent on the geopolitical ambitions of the Kremlin, which resulted in Yerevan pursuing a foreign policy that lacks both strategy and tactics. Since the collapse of the Soviet Union, Armenia is completely tied and depends on Russia's external political and economic ambitions. Armenia is saved from hunger by a rich Armenian diaspora (private transfers are about two billion dollars a year) and sponsorship of the US Congress. Armenia is unilaterally dependent on official Moscow, which led to the dispersion of subjectivity and the squandering of the potential of foreign policy.While Armenia receives different proposals on bilateral and multilateral cooperation from Iran, Yerevan’s policy is obviously clamped by Russia, which pursues solely its own interests.
Many Armenian experts understand that now it is not necessary to harbor illusions that Iran considers it preferable to deal not with Azerbaijan, but with Armenia, in regional projects. Even if this is so, Iran cannot wait endlessly for Armenia's counter-initiatives. If we take a closer look at regional processes on a more global perspective, it is obvious that Yerevan's policy of maintaining the status quo in Armenian-Azerbaijan conflict, in fact, is unpromising, and leads to the isolation of official Yerevan and the creation of a dangerous demographic situation inside Armenia.
However, the quality of the current Armenian political elite does not give rise to hopes for a settlement of the conflict between Azerbaijan and Armenia. The situation in the country is extremely difficult. Today it is an indisputable fact that without Azerbaijan it is impossible to carry out any geopolitical or geo-economic project in the South Caucasus. Armenia has actually found itself in complete self-isolation, this is primarily a problem of power, and then of the people. For President Sargsyan and his ruling criminal-oligarchic clan, the war with Azerbaijan, the continuation of the occupation of Azerbaijani territories is a real opportunity for maintaining its own political power. All his statements once again prove that Sargsyan is an absolutely irresponsible and short-sighted politician, a separatist who accidentally fell on the forefront of the political life of Armenia, whose hands are elbow in blood. From this point of view, it increasingly seems to me that the Armenian president lives in his  dream, not noticing what is happening in the South Caucasus region. The Armenian president likes to talk about the independence of his country. However, it is an indisputable fact that Armenia is the most dependent country in the South Caucasus.
Serzh Sargsyan and his criminal-oligarchic pyramid, called the Armenian government that runs the country, destroys all small and medium-sized businesses, which causes discontent among the population. In the country, unemployment is growing rapidly, and there are more people wishing to take part in mass actions. No matter how the Armenian authorities conceal the truth, the Armenian economy is experiencing a systemic crisis. The Armenian authorities hide the real figures, which testify to the catastrophic state of the country's economy. The sharp social discontent of the people will necessarily put an end to the regime of Serzh Sargsyan. The question is only when it will happen.
While Armenia is quickly moving towards the abyss, Azerbaijan is intensively using the Iranian direction. Tehran has become the venue for the second summit of the presidents of Russia, Azerbaijan and Iran. The Iran-Azerbaijan railway bridge will soon be constructed as part of this cooperation. This project will further emphasize the political and economic significance of the Baku-Tbilisi-Kars railway.
President Putin has already given his message that the meeting will focus on joint work in the Caspian Sea and the creation of the North-South transport corridor, a railway corridor that will link the railways of Azerbaijan, Iran and Russia, which will ensure direct transport links between the Baltic States and India through Iran.
It turns out that Azerbaijan has properly built its foreign policy strategy and lies at the crossroads of all serious transport projects that will strengthen the country`s already high rating not only in the region, but also in the world.
Arye Gut
Political Analyst
Advertisement
Subscribe for our daily newsletter