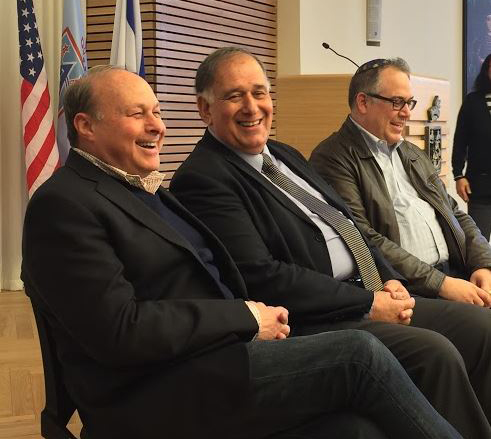 Stan Rosenberg, Massachusetts' first openly-gay Senate President, was among ten state Senators who traveled to Israel in early December as part of an ongoing relationship between Massachusetts and Israel, with strong economic and cultural ties.

“This was my third trip to Israel over the last thirty years and every time I visit, I come away with a greater appreciation for the complexity of the culture, society, conflict, and people,” the Senator says. “On this trip in particular, a large portion of the curriculum was focused on the strong business and economic connections that exist between Israel and our Commonwealth, so it was encouraging to see the continued prosperous development of the Israeli hi-tech and start up industries.”

The delegation spent time at start-up incubators and accelerators, hearing from entrepreneurs, venture capitalists, and government officials about how these economies are cultivated and supported. In addition to that, the Senator didn’t skip the opportunity to meet with Israeli LGBT leaders and learn more about the LGBT struggle in the country.

“We had the opportunity to meet with two different LGBT activist groups, both with their own distinct compositions and sets of challenges,” he says. “In Jerusalem, we had a group discussion with representatives from the Yerushalmim movement, a civic organization aiming to build Jerusalem as a vibrant, pluralistic, and inclusive city. One of the speakers was Sarah Weil, the founder of the LGBTQ women’s group, Women’s Gathering. She discussed the stabbing that occurred at the 2014 LGBT Pride Parade in Jerusalem and the profound impact it had on the divisions between the LGBT and Jewish Orthodox communities.”

“As a result, she helped organize and then participated in a series of public dialogues between members of the Jewish Orthodox and LGBT community for constructive conversations aimed at growing a mutual understanding and greater sense of community trust.”

While in Tel Aviv, the Senator also had a discussion with Imri Kalman and Chen Arieli, joint co-chairs of the Aguda, Israeli’s National LGBT Task Force. “Chen and Imri provided the group with a more general update on LGBT rights and offered their opinions on how the issue of LGBT equality functions in Israeli politics,” he says. “While they believe there have been some successes in winning over the hearts and minds of people, especially in Tel Aviv, they expressed their frustration that this social change has not yet manifested itself into political or legal realities and reform. Having played a role in the fight for marriage equality in Massachusetts, I could relate to the process and the time it takes some people to have a true change of heart on an issue like this.”

Did the fact that you are Jewish have a special meaning to you when traveling to Israel?

“About a quarter of the Senate is actually Jewish by birth or by marriage, and about half of the Senators on the trip itself were Jewish. Growing up, I was always interested in religion, and specifically Judaism. In fact, I almost attended rabbinical school before instead going to UMass Amherst. Being able to not only hear about, but actually experience, the places that are mentioned in the holy books of all three religions, was a humbling experience.”

Before going on the trip, Rosenberg and the rest of the delegation faced petitioners who opposed the trip and said that by going on the trip, lawmakers are signaling their support for the Israeli government in the conflict between Israel and the Palestinian people.

“We had always planned on going on the trip, despite the objections, because we saw this study tour as an opportunity to learn from people with varying perspectives and to gain a greater, more nuanced, understanding,” Rosenberg explains. “I believe the opponents of the trip may be surprised to learn that we actually spent time in the West Bank and had the chance to speak with Palestinians directly, to hear their views on all aspects of the conflict. From the onset, the sponsors of the trip, the Jewish Community Relations Council, emphasized that their goal was to have the group leave with more questions than answers. Their commitment to this objective was upheld throughout our time in Israel, as each speaker we heard from, sometimes directly contrasting one another, only added narrative strands to the complicated reality.”