By DAVID PRICE
JULY 28, 2017 19:58
Advertisement
Why was the medieval Roman church and the Orthodox church so antisemitic? Why were the Hebrew scriptures and all knowledge of Hebrew banned? Why were Christians expelled for 'judaizing' when it is clear that Jesus and nearly all the early Christians were Jews? The last verse of Luke says that Christ's disciples were 'continually in the Temple, praising and blessing God.' In Acts James, the brother of Jesus, instructs the Apostle Paul how best to perform Temple ritual. In early Christian writings up to the time of Jerome around 400, he is described as bishop of bishops, praying inside the Temple as Sagan priest.
Church history has been turned upside down. Black means white and white black.
Why in short was Christian history re-written between the first century when Christians took full part in the Temple services, as the gospels and Acts say, and the time of Constantine in 325 when at Nicea he created an imperial Catholic Church?
A major discovery mentioned in archaeologist Meir Ben-Dov's book 'In the Shadow of the Temple' p187f  helps explains what was behind the so-called 'lost centuries' of Christian history. Here's what he wrote about an extraordinary discovery during the first modern dig near Temple Mount:"Among the most outstanding volunteers working on our dig were students from Ambassador College in Pasadena, California, who returned annually in groups of 100 and spent six weeks in arduous and energetic labor. Because of their remarkable fortitude and energy we often assigned them to particularly difficult projects. One was to uncover what could be found under the remains of the Moslem palace south of the Temple Mount. A group of Ambassador students set work among the foundations of the building, which sometimes extended as far down as 7 meters and included parts of columns from earlier buildings placed in secondary use by the Moslem builders.The year was 1970 and we were approaching the 9th of Av -- when one of the members of this group came running towards me flushed with excitement. "I've been looking all over for you!" he shouted. "What's up?" I asked, though it seemed pretty clear from the state he was in that he had found something interesting. "There's an inscription down there," he told me, and I accompanied him back to the area and climbed down the ladder to find that a column that the Moslems had incorporated into the palace foundation walls bore a clear inscription in Latin letters. Even at first glance I could tell that this was a royal inscription, though most of it was still not visible. After a few hours' hard work we managed to free the column from the wall of which it had become a part -- without damaging the wall itself -- and cleaned off the remaining plaster that still clung on to it. Then came our startling discovery that it was a dedicatory inscription to the Tenth Legion mentioning none other than Titus himself.We were filled with emotion because of the uncanny symbolism of the find. Here we were on the eve of the 9th of Av. One thousand nine hundred years ago to the day, Titus had briefed his troops on the storming of the Temple Mount. And now, in the renewed State of Israel, standing in Jerusalem, digging alongside the Temple Mount, we had come into tangible contact with Titus and his legions." (emphasis added.)Ambassador College was collaborating in the first dig at Jerusalem organized by Prof Benjamin Mazar of the Hebrew University and the Israel Exploration Society. 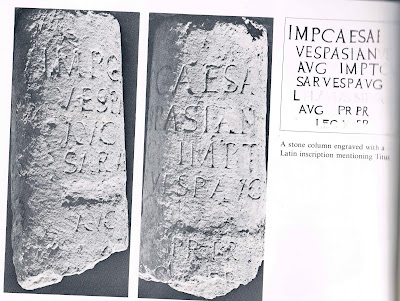 Dr Ernest L Martin, who led the Ambassador College group, revealed the truth about Titus at the time that student John Turner uncovered the carved the Titus Pillar with the imperial name of Vespasian.There are two versions of the briefing that Titus gave to his General Staff about storming and looting of the Temple in 70 CE. One is a short version. It looks more like Roman propaganda. Why? Because it appears to be a censored version that gives the entirely wrong impression of the facts. This was a common technique in Rhetoric or "spin" management as we would say today.What it leaves out is more significant than what it mentions. The fragment is attributed to the historian Tacitus and says:The staff told Titus: 'This holy building is the most beautiful structure ever built by the hand of man and should not be destroyed. If we leave it unharmed, its continued existence would serve as a witness to the moderation of the Romans. But if it were destroyed, the Roman name would be forever blackened. "What it admits is striking. That the 'Jewish' Temple outshone anything in the Roman world is an extraordinary admission for any Roman writer, proud of Rome's achievements. Many other writers, however, make the same assessment. This account, in itself, indicates the desperation to put some form of positive gloss on what in effect was a global disaster to its prestige. Rome destroyed the World's Wonder, a city greater than Rome and in direct violation to the Treaty between Caesar and the Jewish Ethnarch.It blackened its reputation forever. The extract implies that the Roman army were careful not to harm this Wonder of the World.
Is it true?

The fuller story is revealed in the Sacred History of Sulpicius Severus, an educated Gallic Christian, a post-Nicene father (NPNF, s2, vol xi, p111). He appears to be quoting from the same or similar historical records but this time he gives the unvarnished truth. The Caesars wanted to destroy the Temple because the Temple Teacher and his Resurrection made nonsense of their pagan pantheon of false gods. Hence the Empire was threatened."Titus is said, after calling the council, to have first deliberated whether he should destroy the Temple, a structure of such extraordinary work. For it seemed good to some that a sacred edifice, distinguished above all human achievements, ought not to be destroyed, inasmuch as, if preserved, it would furnish an evidence of Roman moderation, but, if destroyed would serve as a perpetual proof of Roman cruelty. But on the opposite side, others and Titus himself, thought that the Temple ought especially to be overthrown, in order that the religion of the Jews and Christians might more thoroughly be subverted; for these religions, although contrary to each other, had nevertheless proceeded from the same authors; that the Christians had sprung up from among the Jews; and that, if the root were extirpated, the offshoot would speedily perish. "The Titus Pillar may have been a Roman celebration of the brutal destruction of the Temple and the subjugation of Jews and Christians.It was the victory pole of paganism. If it was erected near where it was found, it would have stood like a vile asherah, decorated with an pagan eagle in the court before the Temple.If that is so, it would have echoed repeated attempts to erect the pagan symbol in the Temple to proclaim to all Roman supremacy of their pantheon. The Roman Governor Pontius Pilate had, according to the contemporary historian Josephus, tried to infiltrate Roman Legion standards into Jerusalem, something forbidden by the earlier treaty between Julius Caesar and the Maccabees. He failed, due to the passive resistance of the Jewish nation, who would rather die than see their Temple defiled.An even more remarkable event occurred around the time of the birth of Christ and the dying days of Herod the Great. Josephus records that Romans attempted to raise an eagle at the great gate of the Temple. Jews, in fervent expectation of the coming of the Messiah at this time, ripped it down. They were led by two fervent Jewish scholars, Judas of Sepphoris and Matthias of Margalus. Fearing the whole nations would rise against him and Rome, Herod burnt alive the main perpetrators and killed their students in a bloody slaughter. Wracked with a putrefying disease, he instructed his soldiers to gather the most illustrious leaders from the entire Jewish nation into the hippodrome and slaughter them all at his death.
Seventy years later Titus may have erected this Pillar as the Roman signal of their definitive destruction of Judaism and Christianity.Despite the myriad of martyrs who maintained the facts of the resurrections, miraculous healings and personal revelations, Rome was unable to accomplish the human destruction of Christianity or Judaism. Then it became obvious that Rome had lost the war against truth. It tried another tactic: Fake history, disinformation and dissembling about why the Temple was destroyed.
The Titus Pillar reveals one reason for truth gap, the so-called 'missing centuries' of Christian history. It took centuries of antisemitic propaganda before the Romans could dissociate and expunge all facts about Christians' involvement in the Temple, where Jesus, James and Joseph taught and officiated. Blocking the circulation of the free circulation Bible in ordinary languages of the people was also necessary.Rome was destroyer of the building God had decreed to be built. How then could Rome, the determined destroyer of the King of Jews, the Chief Priest of that building, present itself as champion of Christianity? Only by centuries of killings and propaganda attempting to subvert all connections between Christ, the Bible and Israel. Then with an empire that had only modified its effete and dying paganism, Constantine could proclaim an imperial religion that he called 'Christianity' where the Hebrew scriptures, the Temple, Sabbath and the festivals were banned on pain of death.David Heilbron Price is author of "Jesus, James, Joseph and the past and future Temple" available in print at booksellers and Amazon and online at Academia.edu.