By DAVID ALLOUCHE
Advertisement
The Simulation

you can find more details about the simulation at www.young-diplomats.com

“Iran has continued its aggressive anti-Israel rhetoric, along with intercontinental ballistic missile tests. There have been little repercussions for its choices—as part of the nuclear deal agreed to through the UN, sanctions have been lifted, Iran's economy is growing and Asian and European countries are trading with it. The hopes of some that a new US regime would take a more aggressive stance towards Iran failed once President Bernie Sanders came into office—his presidency has become even more willing to look the other way with Iran's double-dealings. With more leeway and more resources, Iran has increased support for Hezbollah and Hamas, as well as continuing to strengthen its influence in Syria and Iraq. 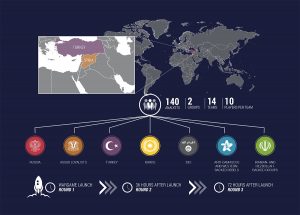 Wikistrat wargame infographic
Israel as well as Saudi Arabia and the Sunni Arab states have grown frustrated by Iran's seeming ability to do whatever it wants, without any repercussions for its actions. On January 15th, Israel launches a comprehensive attack on Iranian military installations, including several underground research and development facilities. The attack involved flying over Jordanian and then Saudi airspace.”

This is the scenario that a dozen high school students found themselves in on Sunday, April 10th. Simulations of this nature are typically run by academics and policy experts, but as part of the Young Ambassadors Model UN program, we asked our most advanced students to represent a stacked version of the Security Council—one which included countries like Egypt, Iran, Israel, Lebanon, Saudi Arabia, Turkey and the Emirates, as well as Germany and the P-5 countries. In Model UN parlance this is called a "Crisis Committee", and attempts to mirror real-life situations by introducing periodic "updates." Delegates (aka students) must then respond dynamically to one another's speeches and ideas, as well as the evolving circumstances. In keeping with our MUN program's focus on Middle East-related topics, we chose to simulate a comprehensive Israeli airstrike. Delegates were informed that Israel had hit 13 targets, but that information about what precisely had been targeted was not yet available.

The Iranian delegate opened the conference by calling attention to the improvements that Iran had been making in the global economic order and calling the attacks not just an unjustified violation of national sovereignty, but harmful to international interests. That was hardly surprising however. It was Saudi Arabia that was the first country to change the internal dynamics, when it used its opening speech to declare its support for Israel, which it defended as having acted under threat from Iran. We had deliberately left the simulation instructions and information provided vague enough to allow delegates like the Saudi one to determine whether they were going to openly support one of the two sides, or maintain neutrality and condemn both sides.

China followed up the Saudi speech by in turn excoriating Israel for its attack on Iran. Israel spoke next and justified its attack as being in response to Iranian threats. Lebanon supported the Iranian position, again unsurprisingly, and referenced prior Israeli strikes on Iraq and Syria in an attempt to show a pattern of unilateral and unjustified attacks by Israel. Turkey brought up Israel's possession of nuclear weapons as evidence that Israel was no more innocent in that area than Iran, However the American delegate followed that up by silencing Iran and its supporters by citing Iran's launch of missiles with an explicit call to wipe out Israel, as the threat justifying Israel's attack.

As promised, less than an hour into the simulation, delegates received their first "update." They were informed that although information on the Israeli airstrikes was still limited, it had now been confirmed that at one of the sites, 200 Iranian civilians—primarily factory workers, had been killed, and that what was believed to be a fortified research facility was actually a bicycle factory, located underground, presumably as a decoy target by the Iranians in the event of just such an attack.

After receiving some time to process this new information, delegates continued discussing amongst one another before returning to the formal debate, where Iran and its supporters attempted to use this information to pressure Israel and censure its actions. Israel did not back down however, nor did many delegates seem swayed, as they stuck with the argument that it was Iran's fault for deliberately hiding a bicycle factory in underground bunkers and putting civilians at risk of harm (for its part, Iran called this response "Israeli propaganda").

A later update told delegates that there had been a double terror attack perpetrated on Israeli Embassies in Argentina (a repeat of the 1992 attack) and Mexico, with the latter attack leaving an Israeli diplomat hospitalized and 8 local workers killed between the two attacks. The attacks were believed to have been perpetrated by Hezbollah-linked agents.

Although changing the focus of the discussion, neither update significantly set the delegates off-topic, and they maintained focus on the primarily plot-line—the Iranian-Israeli nuclear issue, and what should be done to prevent future violence from occurring.

France had suggested improved supervision of Iran's nuclear program (a consensus of most of the countries and indeed of the simulation itself being that there was significant mistrust of the status quo supervision). There was soon a working paper in circulation which called for sending a UN supervising force to be stationed in both Iran and Israel, with Russia overseeing the Iranian mission and the US overseeing the Israeli mission. This suggestion was supported by 9 countries, including France, Russia, the US and Israel.

An alternative working paper called for sanctioning Israel for its actions, monitoring Israel's nuclear plants (arguing that Iran was already under supervision), and sending a UN team to monitor Israeli military activities and prevent future outbreaks of violence. This initiative was put forth by China, Iran and Lebanon.

Given that 9 of the 12 delegates supported the more neutral language of the first working paper, it became a question of convincing China, which could veto any draft resolution, to lend its support. This was eventually achieved by a bold—albeit vague, call for Israel to announce its nuclear activities. China accepted this compromise, and the resolution passed by overwhelming majority, bringing the committee to an end. The delegates of Israel and Iran received commendation from their peers as the Best and Outstanding Delegates respectively.

The simulation showed what might happen if Israel felt pushed to the brink by US and European rapprochement with Iran, but on the other hand, tacit support from Saudi Arabia and other key Sunni states. The proceedings indicated that given the chance, many of those countries would take the opportunity to call for a deal with more robust supervision on Iran (and for the Sunni states, greater supervision of Israel in the name of neutrality was an added bonus). Although it's debatable whether and which Arab states might publicly declare their support for Israel in this hypothetical, the mistrust of the deal itself could lead to an attempt to rewrite its terms, as happened in our simulation.

Wikisrat is the world's first crowd-sourced consultancy, Wikistrat uses an innovative online platform to bring together academics, analysts, and experts from a variety of disciplines and backgrounds to analyze the news, identify trends, forecast future events.