Hundreds of Palestinian rioters attempted to set fire to the Joseph's Tomb compound in Nablus on Friday morning. 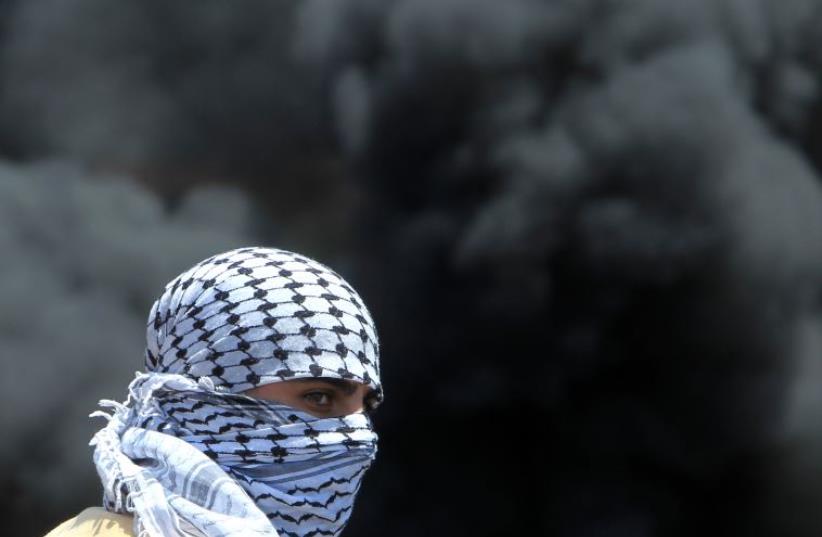 A masked Palestinian protester looks on amid the smoke of burning tires during clashes with Israeli security forces near Nablus
(photo credit: AFP PHOTO)
Advertisement
The Palestinian Authority and the United Nations condemned the arson attack on the Joseph Tomb’s compound in Nablus early Friday morning.Palestinian Authority President Mahmoud Abbas pledged to create an investigatory committee to look into the blaze, which severely damaged sections of the compound.There were no reports of injuries.A YouTube video of the mob attack that involved some 100 Palestinians showed flames shooting up into the predawn darkness from the windows of one of the buildings in the small compound.A statement from Abbas’s office said the president “stressed his rejection of these actions and all actions that violate law and order, and which distort our culture, our morals and our religion.”It was the first condemnation Abbas has issued with regard to any of the 27 Palestinian terrorist attacks that have killed eight Israelis and wounded more than 70 since October 1.UN Secretary-General Ban Ki-moon welcomed Abbas’s statement and also issued his own condemnation of the attack.“This reprehensible act is yet another example of the escalating violence in the region, threatening to further inflame sensitivities owing to the religious significance of Joseph’s Tomb,” Ban’s office said in a statement released on Friday.“The secretary-general calls on all sides to respect the sanctity of all holy sites, refrain from any inflammatory actions or statements and reject the extremist elements that are pursuing a political agenda seeking to transform the current situation into a religious conflict,” Ban’s office said.The tomb is located near what was once the biblical city of Shehem and has a history of Jewish, Christian and Muslim worship. It is fully under the control of the PA.Jewish worship has been severely limited at the tomb since the start of the second intifada in October 2000, after an Israeli border policeman was killed there during clashes with Palestinians.Under the Oslo Accords, Jews are allowed regular access to the site and a yeshiva was located there. Now, however, Jewish worshipers can access the tomb only once a month in the middle of the night, when the IDF secures the roads that lead to the tomb.The fire was brought under control by Palestinian police before IDF units could arrive.The blaze was set hours after Prime Minister Benjamin Netanyahu, in a Jerusalem press conference, accused Abbas of inciting Palestinian violence against Israelis by falsely charging that it was harming the Aksa Mosque on the Temple Mount, which is the third holiest site in Islam.The Temple Mount and the city of Jerusalem are points of intense contention between Israelis and Palestinians, who want the eastern part of the city, including the Old City, to be the capital of their future state.Israel believes the entire city should remain united under its sovereignty, save for the Temple Mount, which is already under the custodianship of the Wakf Islamic trust and Jordanian monarchy.On Friday, Israeli politicians and diplomats linked Joseph’s Tomb with the situation in Jerusalem, as they warned that only Israel could protect freedom of religion at holy sites in the capital.Foreign Ministry director-general Dore Gold said of the Joseph’s Tomb arson that, “The fire illustrates what would happen to Jerusalem’s holy places if they were in the hands of the Palestinian Authority. Only Israel can protect the places that are holy to all religions in Jerusalem. The attack is reminiscent of the action of Islamist extremists in Afghanistan and Libya.”Yisrael Beytenu party head Avigdor Liberman held the PA responsible for the blaze at Joseph’s Tomb, saying it showed the PA’s “occupation is no different than that of Islamic State,” while Deputy Foreign Minister Tzipi Hotovely said the arson showed that Palestinian anger at Israel had nothing to do with Israeli control of areas over the pre-1967 lines, since Joseph’s Tomb is located in a city under PA control.“The tomb is not under Israeli sovereignty, and in spite of that, the Palestinians set it on fire. They are trying to rewrite history by harming Jewish holy places that bear testament to our deep connection to the Land of Israel,” Hotovely said.President Reuven Rivlin said, “Damaging Jewish holy places is a hate crime,” and calling such persistent action, “a blatant violation of international law” whose negative effect can be felt both on a basic human and Jewish emotional level.Rivlin said he spoke that morning with Samaria Regional Council head Yossi Dagan and security forces. Dagan told the media the arson attack was yet one more proof that Israel could not rely on Abbas as a partner for peace.“I call on the prime minister to immediately bring back IDF units to Joseph’s Tomb, because it’s clear that if he doesn’t, there will be nobody to guard this inalienable asset for us. Again, the responsibility [for the blaze] belongs to Abu Mazen, the Holocaust denier, and he has to answer for it. The cat cannot guard the cream! He’ll burn it!,” Dagan said.Avi Ro’eh, who heads the Council of Jewish Communities of Judea, Samaria and the Gaza Strip, also called on the IDF to take control of the tomb and to allow Jewish worshipers regular access to it.“Once again, it’s been proven that there is no alternative to Israeli sovereignty when it comes to preserving Jewish holy sites,” Ro’eh said.