A special forces police officer fired at the terrorist, hitting him and neutralizing him after he had stabbed and wounded a woman.

By JPOST.COM STAFF, SAM SOKOL
OCTOBER 14, 2015 18:51
Stabbing attack at Jerusalem Central Bus Station
Advertisement
A terrorist stabbed and moderately-to-seriously wounded an approximately 60-year-old woman across the street from the Jerusalem Central Bus Station on Wednesday.The terrorist was Ahmed Sha'aban, a 23-year-old resident of the Ras el-Amud neighborhood in Jerusalem. He was released from prison earlier this years after serving a three-year sentence for terror activity. Magen David Adom paramedics treated the victim and transported her to Shaare Zedek Medical Center in the capital.According to police, the terrorist stabbed the woman while she was attempting to board the number 15 bus on Yaffo Street.The driver made sure the woman got on to the bus after she was stabbed, and then quickly closed the vehicle's door before the terrorist could board. 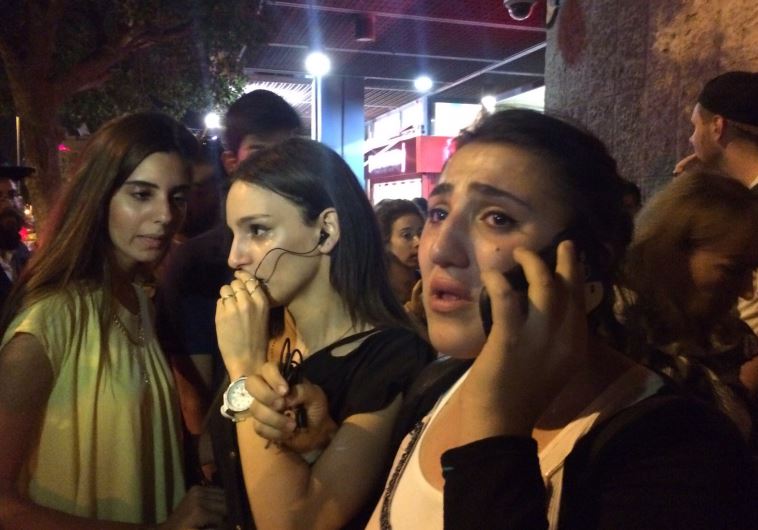 (photo credit: Sam Sokol)The terrorist then fled from the bus and a special forces police officer who was near the scene of the attack saw him with the knife, shooting at him, hitting him and neutralizing him.Dr. Yoni Elstein, an MDA volunteer who was at the scene, said that "on the bus, in a seat near the driver, a fully conscious woman in her 60s was sitting, suffering from a stab wound to her upper body."Paramedic Emanuel Stern said that the victim was aware of her surroundings and able to communicate in the ambulance en route to the hospital.Medic Levi Levine of United Hatzalah said that he was on the other side of the street dropping off his cousin at the Central Bus Station when he heard "four or five shots" and immediately ran toward the noise just in time to see the terrorist being killed."There was a guy on his face with a knife in his hand" and several armed men were running toward him, Levine told the Jerusalem Post only minutes after the attack.Levine said that he checked the attacker and that he had no pulse, adding that he appeared to be around thirty years old and that a search of his pockets uncovered a blue identity card, indicating that he either held Israeli citizenship or Jerusalem residency.The terrorist's body was removed in a black bag, said ZAKA head Yehuda Meshi Zahav. 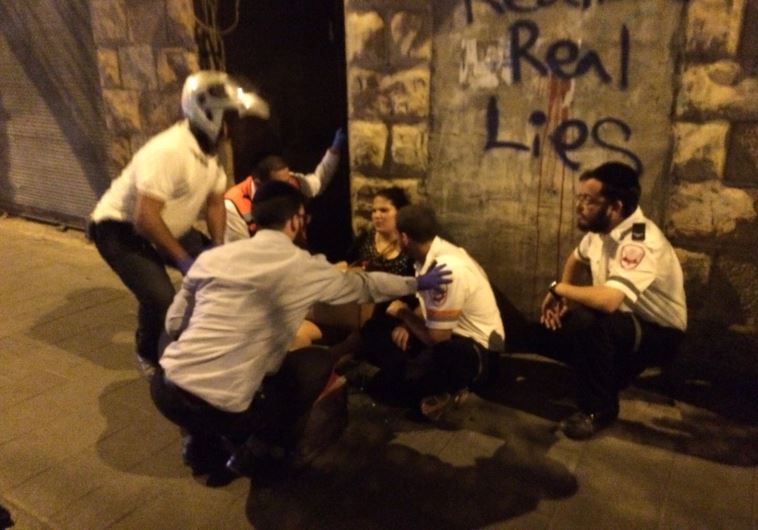 (photo credit: Sam Sokol)
As police pushed the large number of onlookers back from the scene rumors of another attack swirled through the crowd prompting police and onlookers to run confused through the surrounding streets. There were sporadic shouts of "Arabs out."MDA paramedics also treated a number of people suffering from shock and paramedics down the block from the attack were loading an ambulance with crying witnesses.The attack came after an earlier attempted stabbing attack at Damascus Gate in the Old City.In that attack, police shot and killed a terrorist who attempted to stab officers.