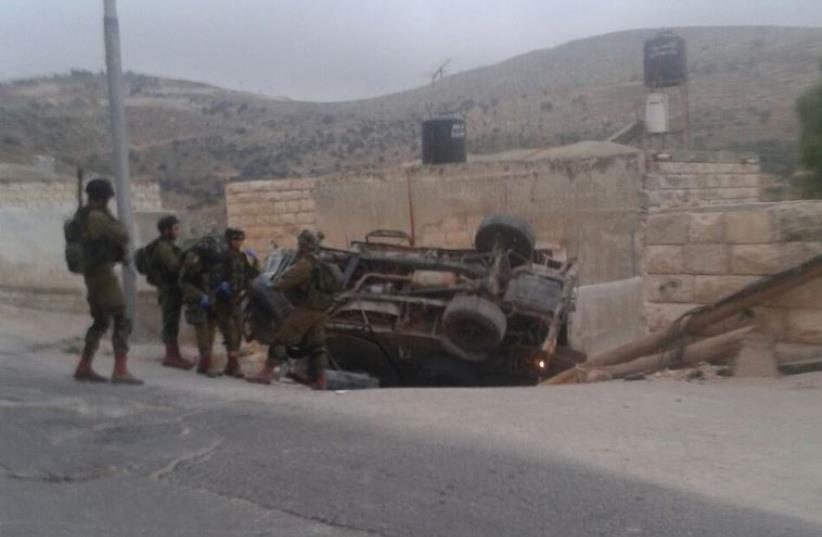 IDF vehicles overturns, killing Palestinian rioter trying to hurl firebomb in the West Bank, June 14, 2015.
(photo credit: Courtesy)
Advertisement
An IDF vehicle struck and killed a Palestinian rioter after the driver lost control and it overturned, the army said Sunday morning.The incident occurred in the course of an IDF operation in Kafr Malik, about 15 km. northeast of Ramallah.An IDF unit had arrived before sunrise to issue requests to a number of residents to appear before security forces for questioning.A few residents hurled stones at the unit, one army source said, and set up a barricade of rocks on the village’s main road.On its way out of the village, an IDF jeep that came under a rock and Molotov cocktail attack veered to avoid hitting the rock barrier, struck a garbage container and overturned on top of a rioter who was about to hurl a firebomb, the source said.Soldiers attempted to provide medical treatment to the attacker, but he succumbed to his wounds, the source said.“The circumstances of the incident will be investigated,” the army said in a statement.Following the incident, hundreds of villagers gathered and threw rocks and firebombs at the unit, which dispersed them, before leaving the area. “The level of rioting we saw after the accident was unusual,” the source told The Jerusalem Post.Local resident Nail Abdul Latah el-Hajj denied the Palestinian had attacked the jeep, saying the man was walking to work at a chicken farm when he was run down on the main street and then crushed as the vehicle crashed into a wall and overturned.Speaking to Reuters, Hajj said the man’s death sparked confrontations between stone-throwing Palestinian youths and Israeli troops. The IDF spokeswoman said the disturbances were already under way when the collision happened.