By JPOST.COM STAFF, YAAKOV LAPPIN
OCTOBER 20, 2015 15:46
Footage of car ramming attack in the West Bank
Advertisement
A Palestinian terrorist lightly wounded an IDF soldier and an Israeli civilian in an attempted vehicular ramming and stabbing attack on Tuesday at the Gush Etzion Junction in the West Bank. After ramming his car into the pedestrians, the assailant then emerged from his vehicle, brandishing a knife. 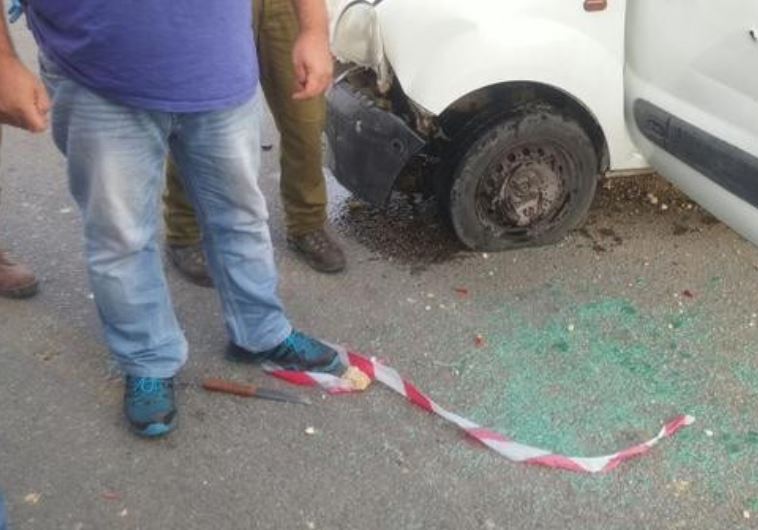 In response, an IDF commander opened fire on the perpetrator, striking and killing him.Both victims - in their early 20s - were lightly hurt. Magen David Adom paramedics evacuated both of the wounded to Hadassah University Medical Center in Jerusalem's Ein Kerem neighborhood. MDA paramedic Dror Eini described the scene of the attack: "When we arrived on the scene we saw an approximately 30-year-old pedestrian standing at the junction who had been hit by the car. He was fully conscious and suffering minor wounds to his limbs."Eini said that "in addition, we saw an approximately 20-year-old fully conscious man, walking, who was also suffering from a light wound to his limbs."He said that after receiving initial treatment on the scene, the men were transported to the hospital. In another attack earlier on Tuesday , a Palestinian terrorist stabbed and lightly wounded an IDF officer near the West Bank town of Bet Awwa, close to the Green Line and near the southern Israeli district of Lakhish.  Soldiers nearby shot and killed the attacker.Also on Tuesday, an Israeli national was killed in a hit-and-run truck incident near a Palestinian village in the Hebron area, after stones were hurled at his vehicle. According to initial investigations, the Israeli motorist exited his vehicle after it was struck by rock-throwers when the Palestinian driver struck him. According to Palestinian media reports, the Palestinian driver turned himself into the Palestinian police in nearby Daharia, in the South Hebron Hills, claiming that the incident was an accident and that he had not intended to hit the Israeli driver.