Hotel bookings in Eilat have skyrocketed from 65% last week to 90% this week, catching hotels unprepared. 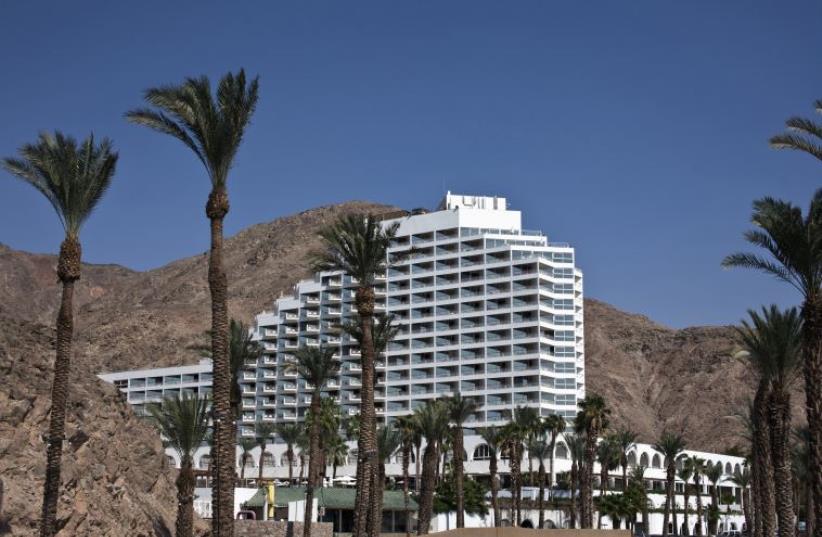 A hotel is seen against a backdrop of mountains in the Red Sea resort of Eilat [Illustrative]
(photo credit: REUTERS)
Advertisement
Israel will allow the entry of 700 Jordanian nationals into the country in order to work in Eilat hotels, a joint statement by the Health Ministry and the Prime Minister's Office read.
According to the decision, approved Friday afternoon in a phone call survey, the workers will enter Israel from the Arava border crossing, also known as the Yitzhak Rabin crossing, a few km. north of Eilat. They will undergo coronavirus tests upon entering the country and will self-isolate according to Health Ministry guidelines. The hotels that will employ the workers will be responsible for making sure they quarantine properly before starting to work.
The purpose of the decision is to provide the Israeli tourism industry, and hotels in Eilat specifically, with the human resources they need in order to cater to the masses of Israeli tourists seeking a vacation since the country began reopening on March 7.
Hotel bookings in Eilat have skyrocketed from 65% last week to 90% this week, according to N12, catching hotels unprepared. Many have not yet opened simply because they are struggling to recruit employees, many of whom still enjoy unemployment benefits and see no reason to return to work.
And it's only going to get worse for Passover, perhaps the busiest time of the year for Israeli hotels.
The workers from Jordan are expected to provide hotels with some well-needed breathing space in order to recruit new workers and prepare for the vacation-thirsty Israeli public.
The announcement was made as tensions between Israel and Jordan are high.
On Wednesday, Israel prevented Hashemite Crown Prince Hussein bin Abdullah from visiting the Temple Mount.
Jordan in retaliation refused on Thursday to authorize Prime Minister Benjamin Netanyahu's flight path over its airspace to the United Arab Emirates, causing the trip's cancelation.
It's the latest diplomatic skirmish in a 26-year relationship fraught with crises brought on by religion, geo-politics and violence.Other decisions reached by the government on Friday include allowing diplomatic envoys to use the Jordan River border crossing between Israel and Jordan and the Taba border crossing between Egypt and Israel for various purposes. In cases of humanitarian or other essential purposes, the same envoys would be allowed to return through the Taba border crossing as well.
Tovah Lazaroff contributed to this report.