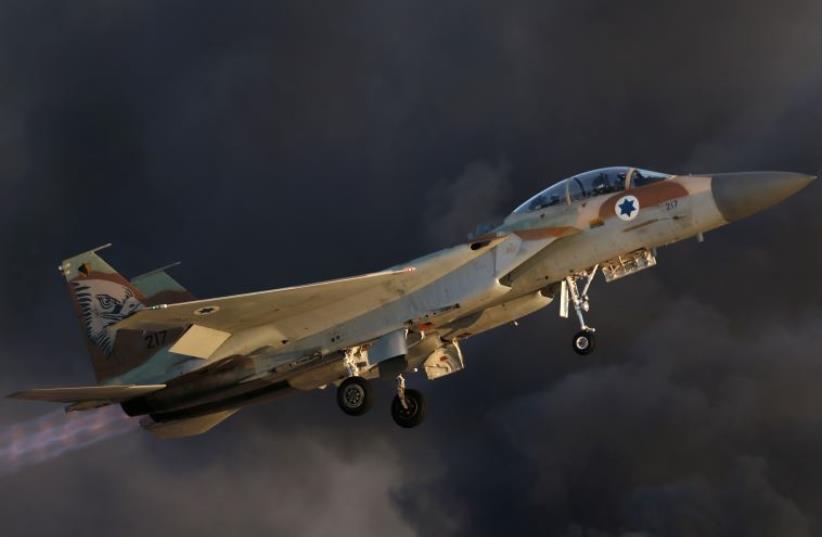 Israeli f-15 fighter jet
(photo credit: REUTERS)
Advertisement
Intelligence Minister Yisrael Katz said on Thursday that the reports of an airstrike targeting Damascus Airport matches Israel’s policy of preventing the transfer of advanced weaponry to Hezbollah.  Katz, while not confirming outright Israel struck Damascus airport stated that the "attack is consistent with our policy to prevent Iran’s smuggling of advanced weapons via Syria to Hezbollah by Iran.”  Katz, who is in the United States meeting with senior officials, made the comment after Arab media reported that Israel struck Hezbollah arms hub near Damascus airport  with five strikes at around 3:25 A.M. local time. No injuries were been reported but a large fireball was seen by locals. "The prime minister has said that whenever we receive intelligence that indicated an intention to transfer advanced weapons to Hezbollah, we will act," Katz said.
An explosion in Syria, April 27, 2017 (Arab Media)
Hezbollah’s al-Manar said that a explosion which hit a fuel tank and warehouses near Damascus International Airport were “probably” caused by an Israeli airstrike which caused only “material damage” and no casualties. According to an intelligence source who spoke to Reuters, the arms depot handles a large amount of weapons supplied by Iran, who regularly sends weapons to Syria via commercial and military cargo planes to Hezbollah and other Iranian-backed militias fighting for the regime of Bashar al-Assad. Iran has been accused of using commercial planes to ferry troops and weapons into Syria. In 2011, Iran Air was designated by the US Treasury in part due to its role in transporting “potentially dangerous Islamic Revolutionary Guard Corps (IRGC) related cargo” as well as “missile or rocket components” to Syria. Sanctions against the airline were dropped in 2015 as part of the nuclear deal but there continue to be indications that the airline continues to fly in weapons and troops to the war-torn country. According to Farzin Nadimi, a Washington-based analyst specializing in the security and defense affairs of Iran and the Persian Gulf region, “Iranian and Syrian airlines have hauled about 21,000 passengers between Tehran/Abadan and Damascus in the past two months alone, along with over 5,000 tons of supplies.”  Nadimi, who made the comment in a briefing for the Washington Institute for Near East Policy, stated that all the flights are “fully chartered by the IRGC and usually unavailable to the general public,” and that the flights are also operated only at nighttime “in order to hinder satellite monitoring.” Israel has reiterated its view several times on any transfer of advanced weaponry to the Lebanese Shiite terror group as a “red line” and will work to prevent any such movement. While the IDF confirms nor denies the strikes, as is their policy regarding foreign reports on purported Israeli strikes, on Tuesday a senior Israeli officer said, in a rare admission, that last month Israel destroyed around 100 Syrian missiles, many of which were due to be delivered to Hezbollah.  On Wednesday Defense Minister Avigdor Lieberman, who is in Moscow for a security conference, said that Israel was concerned over Iranian activity in Syria and that Tehran was using Syrian soil as a base for arms smuggling to Hezbollah in Lebanon.Israel  "will not allow Iranian and Hezbollah forces to be amassed on the Golan Heights border,” he said.