His cause of death has yet to be announced, though he had been hospitalized with COVID-19 in December. 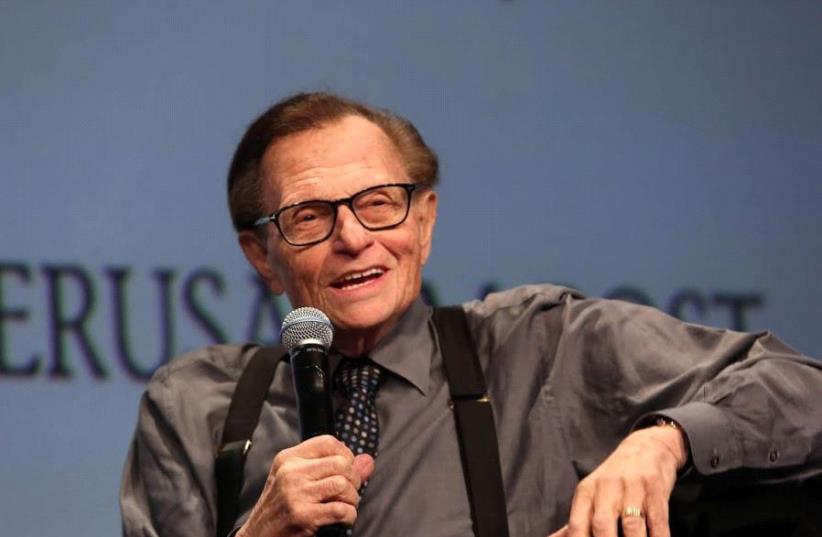 Legendary journalist Larry King at The Jerusalem Post Conference in New York, May 7, 2017
(photo credit: SIVAN FARAG)
Advertisement
Legendary talk show host Larry King died on Saturday at 87, a month after being hospitalized with COVID-19. His exact cause of death at Cedars-Sinai Medical Center in Los Angeles had yet to be announced at press time.King was considered the king of interview talk shows, having conducting by his count over 60,000 interviews in his 63 years in the business. He was at his peak on “Larry King Live” on CNN, which kicked off in 1985 and ran for 25 years. It remained the network’s top-rated show throughout his tenure.Afterward he continued doing interviews and discussing politics, segueing to the Internet with “Larry King Now,” a daily talk show on Hulu from Ora TV, and becoming an active presence on Twitter.“For 63 years and across the platforms of radio, television and digital media, Larry’s many thousands of interviews, awards, and global acclaim stand as a testament to his unique and lasting talent as a broadcaster,” Ora Media said in a posted statement. “Additionally, while it was his name appearing in the shows’ titles, Larry always viewed his interview subjects as the true stars of his programs, and himself as merely an unbiased conduit between the guest and the audience. Whether he was interviewing a [US] president, foreign leader, celebrity, scandal-ridden personage, or an everyman, Larry liked to ask short, direct and uncomplicated questions.”

The television icon, born and raised Lawrence Zeiger to Orthodox Jews Jennie and Aaron, who emigrated to the United States from Belarus in the 1930s, was always happy to talk about his hometown borough of Brooklyn, his beloved Dodgers, and his roots as a Jew.“I love being Jewish, am proud of my Jewishness, and I love Israel,” King told The Jerusalem Post’s David Brinn in 2017. “But in 60 years of broadcasting and asking questions, I still don’t understand prejudice and why people kill each other. We have such a limited time on Earth, why in so little time would we waste energy or lose life over hating each other? It’s insanity. Fighting over land is nuts, and it overwhelms me how far we’ve advanced technologically but so little on the human side. I’ve interviewed just about every major religious leader in the world except the pope and nobody has been able to answer that question.”He told the Post that in all his years at CNN, he did not see any bias against Israel. “I thought we were always fair,” he said. “I only experienced people trying to be fair and objective.”King noted that he had interviewed every one of Israel’s prime ministers, with the exception of David Ben-Gurion; how one time when he arrived late to meet prime minister Menachem Begin, security guards almost shot him, as he was outside the building when nobody was supposed to be there; and how Prime Minister Benjamin Netanyahu had driven him to the airport on his first trip to Israel."I mourn the passing of Larry King whom I have known for nearly 40 years," Netanyahu tweeted following the announcement. "He was a great interviewer - sensitivity, humorous and witty. And he actually let you talk! An all around mensch. Millions around the world shall miss him, including myself."King faced a series of health complications over the years, having undergone both lung and prostate cancer, and had Type 2 diabetes. He also had a heart attack in 1987 and a stroke in 2019.Sometimes referred to as a “serial husband,” King was married eight times to seven women, and had five children, nine grandchildren and four great-grandchildren. Two of his children died over the summer within weeks of each other: Andy, 65, from a heart attack on July 28, and Chaia, 51, on August 19, a short time after having been diagnosed with lung cancer.King’s father died of a heart attack when King was nine years old.The gifted gabber began his career in 1957 at a radio station in Miami, where he changed his name to Larry King, before moving on to TV and newspapers. He gained prominence beginning in 1978 as host of “The Larry King Show,” an all-night nationwide call-in radio program.King received many awards during his life, including two Peabodys, an Emmy award, and 10 Cable ACE Awards.