The initial report was made by Naharnet News Agency. 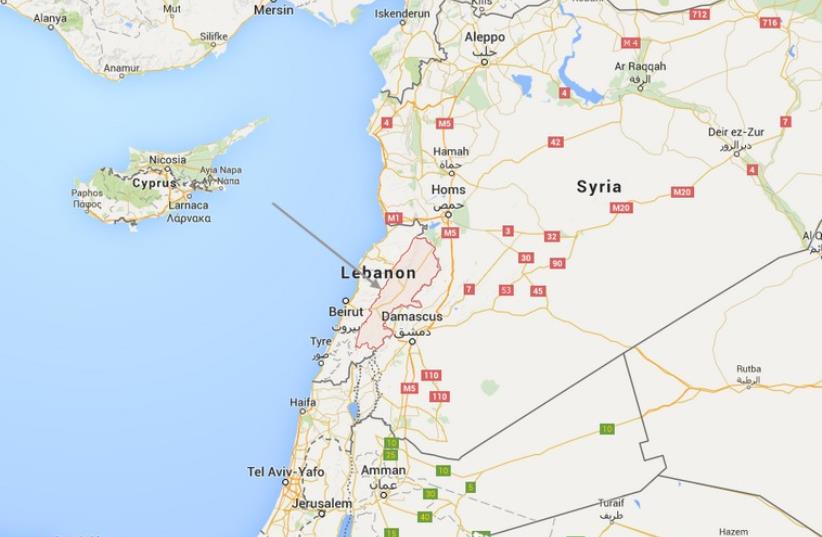 Map of Lebanon
(photo credit: GOOGLE)
Advertisement
Lebanese news media is reporting on Saturday that Israeli warjets and reconnaissance planes have made their presence felt in the skies above Beirut and the central Bekaa.The initial report was made by Naharnet News Agency.Israel has not been hesitant to use air power in flexing its muscles against its enemies across the northern frontier.Last month, Arab media reported a heavy presence of IAF jets in the sky over Lebanon as part of a nationwide military drill, leaving many to wonder if the army was carrying out an operation beyond enemy lines.The IDF refused to respond to the foreign reports and an Israeli source smiled when asked if there was truth to the reports. The source told The Jerusalem Post's sister publication Ma'ariv: "Not everything that happens in the Middle East is our handiwork."The biggest surprise arrived from Lebanon, as Hezbollah, for the first time, responded to foreign reports of an attack, denying that Israel was part of the equation. While the Lebanese news websites al-Nashra and The Daily Star reported that Israeli warplanes carried out airstrikes in the mountainous area of eastern Lebanon causing a number of injuries, Hezbollah-affiliated al-Manar reported that Israel had no connection to the events and did not strike targets in their territory."Israel did not attack on our land," a senior Hezbollah official was quoted as saying.Former prime minister Ehud Barak addressed the situation in the North during a speech at Tel Aviv University for an event marking thirty years since the IDF's deployment in the security zone in southern Lebanon. Barak said, "Our adversary is serious and we must not be complacent on any front. We must not be satisfied and take our so-called God-given superiority for granted. Our superiority is the result of serious work."Barak expressed his fears, saying, "The country has no choice but to draw conclusions. This challenge cannot be met by deploying forces in every place from which missiles can be fired. The Iron Dome and David's Sling are expensive, very long-range projects. Being able to ensure security is immeasurable as is the calamity that will ensue when it becomes clear that we did not prepare or we did not understand the seriousness of the challenges, like the need to reach conclusions. We could find ourselves running to shelters again as we did in Operation Protective Edge."The former prime minister slammed the Israeli leadership, saying, "We need to combine diplomatic steps with military steps. All of these things require a sharp and concise leadership which does not fear looking reality in the eyes and recognizing what needs to be done and to simply go and do it."Noam Amir contributed to this report.