Palestinian shot dead after clashing with Israelis in the W. Bank

IDF in Kusra after a reported shooting and hostage situation, Nov. 30, 2017. (YESH DIN).
Advertisement
A Palestinian farmer was killed, two Israeli fathers were wounded, and a group of 20 schoolboys were ambushed in a cave during a series of violent incidents that broke out Thursday morning in the Samaria region of the West Bank.The two fathers told the media that Palestinians attacked the group with stones and boulders near the village of Kusra during a hike to help celebrate the bar mitzva of one of the boys, Avitzur.The two men had guns to protect the group, and one of them said he fired in self-defense at the Palestinians.“We were in danger of our lives,” one of the fathers said.The IDF concurred, adding that the shot was fatal.Palestinian sources identified the farmer as Mahmoud Udah, 48, from the village of Kusra, near Nablus.But Kusra residents said he was killed while working in his field. It was only then that the villagers learned that there was a group of children and attacked them in the aftermath of his death, they said.The IDF and the police are investigating the matter.The IDF said in a statement that the group was "hiking near the village of Kusra. During the trip, a disturbance broke out near the village involving dozens of Palestinians, during which one of the hikers shot at the rioters in self-defense. The hikers barricaded themselves in a cave near the village. IDF arrived at the site and rescued all the hikers. One of the rioters was hit by gunfire.” The IDF gave him medical treatment at the scene, but the man died from his wounds, the statement said.Both of the fathers were lightly wounded. They were taken by ambulance to Beilinson Hospital in Petah Tikva and later provided testimony to the police.Avitzur spoke to the media outside of Beilinson Hospital.He described how the adults split up. One adult outside tried to keep the Palestinians away and sought help from the army, while the other one was with the boys in the cave.Palestinians came to the cave “and attacked us,” the teary-eyed boy said. They stole the gun from the adult in the cave and hit him in the head with a stone. The Palestinians stole their cellphones and used pepper spray against them, he said. “They yelled at us and said they would kill us.”

When the soldiers arrived, they tried to disperse the Palestinians.A video posted on WhatsApp showed the soldiers standing between the boys in the cave and a group of Palestinian men.A Palestinian video posted on twitter showed a group of children hiding in a cave.The text reads: “Citizens in the town of Kusra south of Nablus are holding a number of settlers inside a cave after a citizen was shot dead by settlers shortly before.”Defense Minister Avigdor Liberman posted in Facebook on Friday in response to the incident, saying, "Yesterday rioters in Kusra  came out with the intention of attacking children during a Bar Mitzva trip in Samaria, and the use of weapons in self-defense is protected by law in every democratic regime."The left-wing groups Rabbis for Human Rights and Yesh Din both published details of the incident as told to them by Kusra residents.Their spokesperson said Udah was shot while working his land outside of Kusra, along with his six-year-old son, and that no one else was present at the time of the incident.His son called village residents for help from his father’s cellphone, because his father was already unconscious, Rabbis for Human Rights said.In the name of the Kusra residents, Yesh Din said: “Three settlers came to the field, one of them armed with a rifle.According to the residents, the same armed settler, for reasons unknown, shot the farmer. The bullet entered his back and left his chest.”When residents came to the field, “an armed settler” shot and wounded one of the Palestinians in the leg, it said.“We strongly oppose violence, especially against civilians,” Rabbis for Human Rights said.Samaria Regional Council head Yossi Dagan said the children “were lynched.” He called on the army and police to take action.Yesh Din said settlers came to the entrance of Kusra on Thursday night and thew stones. About that incident, the IDF said in a statement: “A short time ago, a violent riot broke out between settlers who tried to enter Kusra and Palestinians in the area.During the incident, an IDF soldier was slightly wounded by a Molotov cocktail. The IDF and police used riot-control measures to end the incident.” 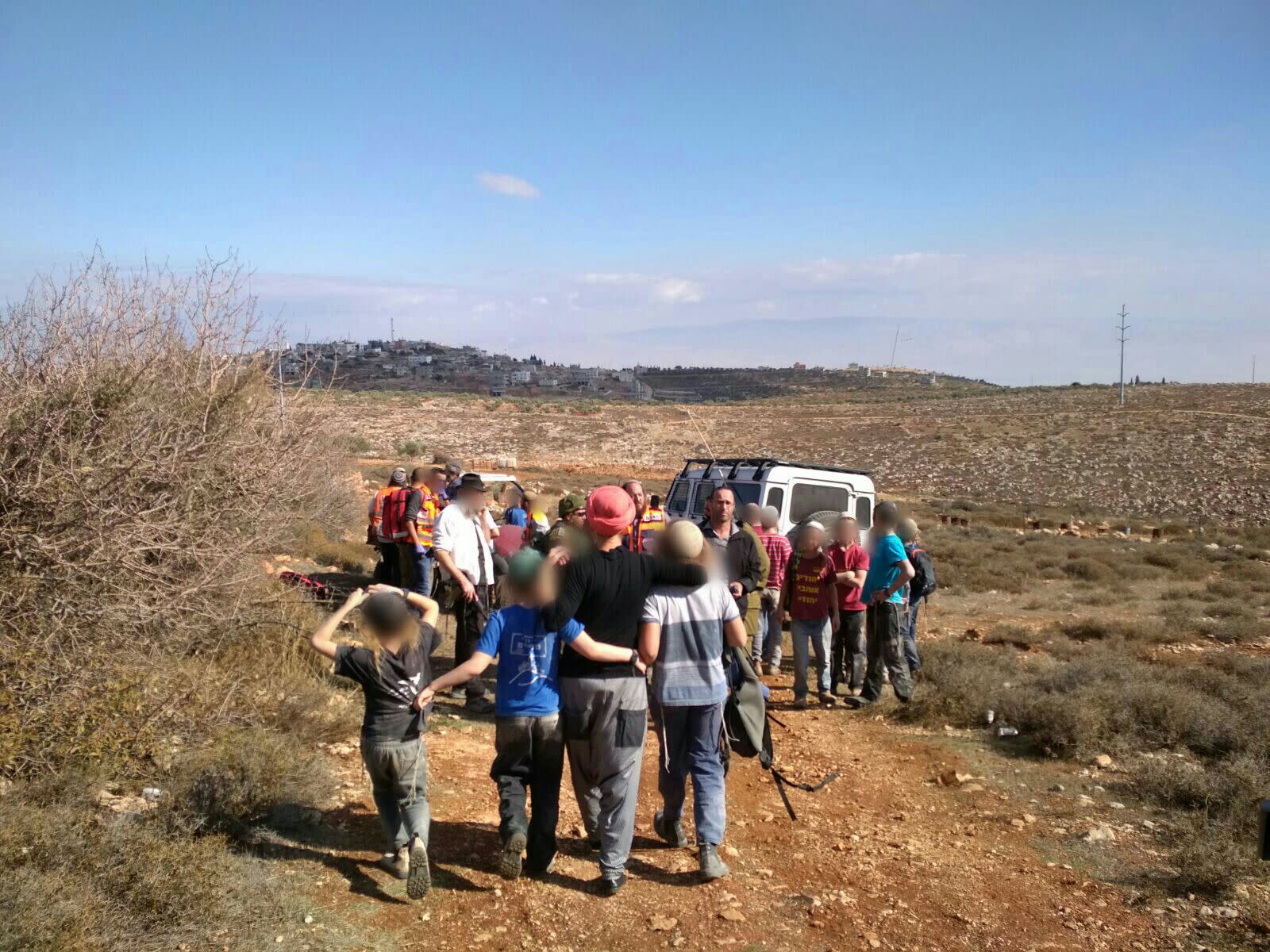 Schoolchildren with soldiers after being taken captive and released in the West Bank. (Credit: Yesh Din)