The three countries held similar naval drills in the Indian Ocean in December 2019. 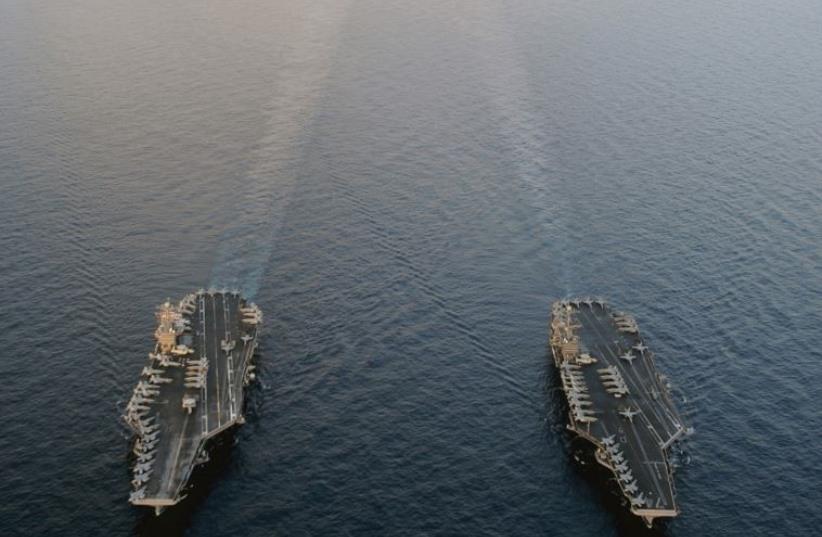 THE NIMITZ-CLASS aircraft carriers USS Abraham Lincoln and USS John C. Stennis plod their way through the Persian Gulf in 2012. ‘Obama’s aversion to launching a preemptive attack on Iran’s nuclear sites is the result of America’s bitter experiences in Afghanistan and Iraq and Obama’s herculean effor
(photo credit: REUTERS)
Advertisement
Russia plans to hold joint naval drills with Iran and China in the Indian Ocean later this month, the RIA news agency cited Moscow's ambassador to Tehran as saying on Monday.
The three countries held similar naval drills in the Indian Ocean in December 2019.
"The next multilateral naval exercises will take place in the northern part of the Indian Ocean in mid-February 2021," Levan Dzhagaryan, the ambassador, told RIA in an interview.
The drills would rehearse search and rescue operations and ensuring the safety of shipping, he said.
Speaking in 2019, Iranian flotilla admiral Gholamreza Tahani said that the result of the exercise is "to show that Iran cannot be isolated," Reuters reported at the time.
The Iranian state broadcaster at the time said the drills included rescuing ships on fire or vessels under attack by pirates and shooting exercises.
It is possible the upcoming naval drills will take place near the Gulf of Oman. A sensitive waterway which connects to the Strait of Hormuz, through which about a fifth of the world’s oil passes.
US President Joe Biden ordered at the beginning of the month that the USS Nimitz aircraft carrier will return home.
US Naval Institute News says that the Nimitz was operating within the US 7th Fleet off the coast of west India when it got the order to go home after nearly eight months on the water.