By HERB KEINON, REUTERS
MAY 7, 2015 21:07
European Union flags
(photo credit: REUTERS)
Advertisement
There is growing desperation among European Union countries about the lack of diplomatic progress between Israel and the Palestinians, EU's ambassador to Israel Lars Faaborg-Andersen said Thursday.According to a communique put out by Haifa University, where Faaborg-Andersen spoke to commemorate Europe Day, the envoy said that while it was clear that the Palestinians also bear responsibility for progress or a freeze in the process, the EU cannot accept steps – such as construction in the settlements – that move the situation “backward.Along with his comments about the impatience in the EU with the lack of progress in the diplomatic process, the envoy added that “any agreement must reflect Israel's security interests.”The ambassador said the EU was in favor of dialogue with Israel, and opposed to its isolation, and said it expected the new government to move the diplomatic process forward. 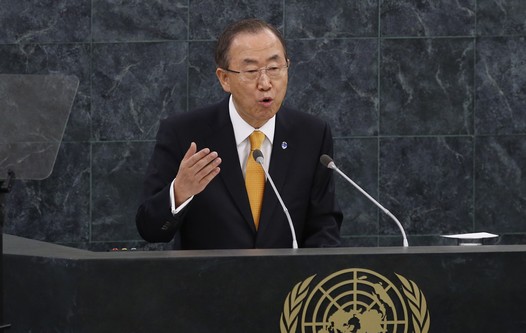 (UN Secretary-General Ban Ki-moon. Photo credit: Reuters)Meanwhile on Thursday, United Nations Secretary-General Ban Ki-moon said that after a new Israeli government has been sworn in he will investigate whether there are "realistic options" for a return to peace talks between Israel and the Palestinians.Prime Minister Benjamin Netanyahu clinched a deal to form a new government on Wednesday just before a deadline expired, but his coalition will rule by the slimmest of majorities in Israel's turbulent parliament.Netanyahu took a stand against Palestinian statehood during his election campaign. Palestinians seek a state in Gaza, the West Bank and east Jerusalem, lands Israel captured in 1967."Once a new government has been sworn in, the Secretary-General will explore with Prime Minister Netanyahu realistic options for a return to meaningful negotiations on a two state solution," UN spokesman Stephane Dujarric said.He also said Ban was also "deeply concerned by recent announcements by Israeli authorities of plans for 900 settlement units in east Jerusalem which are illegal under international law."Anti-settlement group Peace Now said on Thursday that Israel was moving ahead with a plan to construct about 900 housing units in the neighborhood of Ramat Shlomo.The project had received earlier approval in 2013, and this week it passed through a Jerusalem district planning committee, Peace Now said.
Advertisement
Subscribe for our daily newsletter