The world of Israeli drones, bristling with the latest sensors and electronic capabilities, formed a significant slice of the country's $5.6 billion of defense exports for 2014. 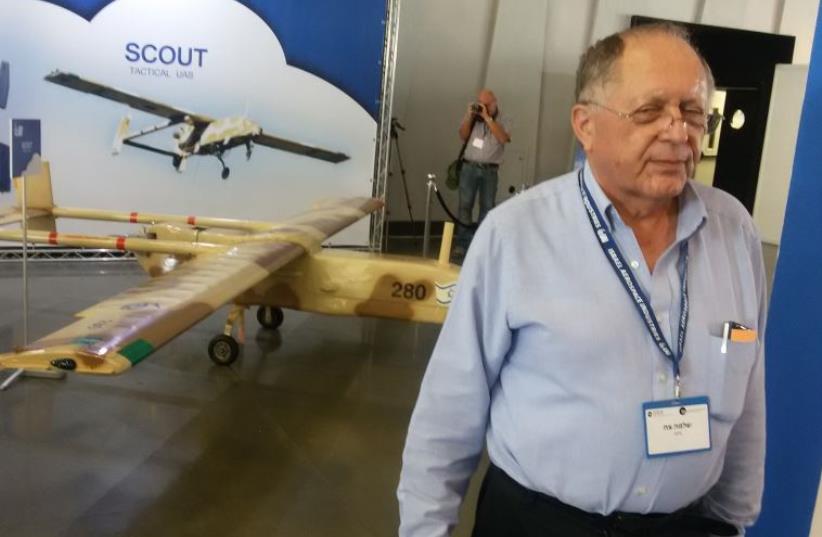 APG Director stands next to the IAI-made Scout drone, developed in the 1970s.
(photo credit: YAAKOV LAPPIN)
Advertisement
Israeli defense manufacturers exhibited and flew their flagship drone platforms over the exhibition grounds at the Autonomous, Unmanned Systems & Robotics drone exhibition in Rishon Lezion on Monday. The drones quietly cruising overhead broadcast high-quality images to a large screen below, showing audience members close-up color images of themselves, taken from high above.“As you watch the drone, it watches you,” a commentator said over a loudspeaker.The world of Israeli drones and their hi-tech payloads, bristling with the latest sensors and electronic capabilities, formed a significant slice of the country’s $5.6 billion worth of defense exports in 2014, and will continue to do so into the foreseeable future.In the midst of the latest products stood an unmanned aerial platform, covered in brown camouflage. It was the Israel Aerospace Industries (IAI)-made Scout drone.According to one of its developers, Shlomo Tsach, this 1970s-era system was a seed that played a key role in starting the Israeli drone revolution. Tsach is today director of the Advanced Programs Group, which provides advanced aerodynamic solutions for current and future operational challenges.Tsach was formerly head of the advanced engineering administration at IAI. During the 1973 Yom Kippur War, when many Israeli aircraft were shot down by the Egyptians and Syrians, Tsach and his colleagues were working around the clock, trying to come up with new solutions to enable the Israel Air Force to bounce back.By 1974, they had their answer, he said, in the form of the Scout drone.“Its shape has become a classic model for future drones,” he said, pointing to the two booms extruding from the wings, and the propeller positioned between them.“This was out first UAV. We developed it in 1974. In 1977, after many negotiations, an initially reluctant army ordered it,” he recalled.Its first operational use came in the First Lebanon War of 1982, when the drones detected targets and sent them in real time to the air force, which destroyed them all within 24 hours.“It was a revolution,” Tsach said. “You can see bombs hitting the targets in the drone’s video feeds,” he added.The US military then sent a delegation to Israel and asked for information on the Scout. Decades of drone development followed.Tsach stayed on at IAI until 2012, before retiring and founding APG, where he looks at next-generation aerial platforms.Looking ahead, he said, the world of highly reliable autonomous flight offered “many new options” for aircraft development, for both the military and civilian flight worlds.