Uncovering the terraces has been a part of a much larger process of rehabilitating both the Carmel Forest and creating buffer zones to protect nearby communities from future fires. 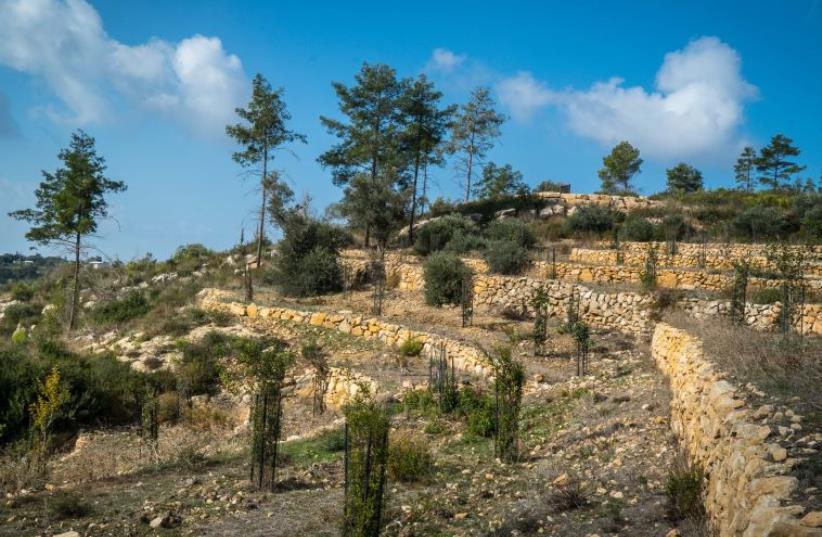 The newly-restored 2,000-year-old terraces in the Carmel forest
(photo credit: Courtesy)
Advertisement
Five years after the Carmel fire tragedy that killed 44 people and burned some 2,550 hectares of land, a series of 2,000-year-old terraces have been exposed and restored in the region.While the fire proved disastrous to both the people and wildlife in the Carmel area, the burning of the thick forest revealed the ancient agricultural terraces, which were then restored by Keren Kayemeth LeIsrael-Jewish National Fund.Workers were able to reconstruct the structures, in part by making use of aerial photographs from 1944, KKLJNF Western Galilee regional director Michael Weinberger explained in a statement from the fund.“A golden opportunity was created for us to restore the same terraces over the course of rehabilitating the burnt area,” Weinberger said.At the same site, workers also uncovered earthenware dating back to the Roman period, corresponding to the estimated age of the terraces according KKLJNF.Uncovering the terraces has been a part of a much larger process of rehabilitating both the Carmel Forest and creating buffer zones to protect nearby communities from future such damage, the statement explained. As part of the process of thinning and pruning trees, the organization also introduced grazing cattle and sheep tasked with clearing some of the vegetation that leads the spread of fires, the statement added.“One of the main challenges in the Carmel Forest rehabilitation has been the creation of a much thinner forest than what was burned, a forest that will likely be less sensitive to such fires and more resistant to the increasingly arid conditions expected in an era of climate change and global warming,” said KKL-JNF chief scientist Omri Boneh.This challenge, Boneh explained, is particularly daunting, due to both the naturally rapid regeneration of pine trees and the depletion of goat herds that used to graze in the area.“KKL-JNF has established a series of experiments to study more ways of creating thinner forests and is testing various means toward increasing grazing, in order to prevent the reproduction of a dense and tangled forest,” he added.