Agriculture minister calls for camera installations at all slaughterhouses 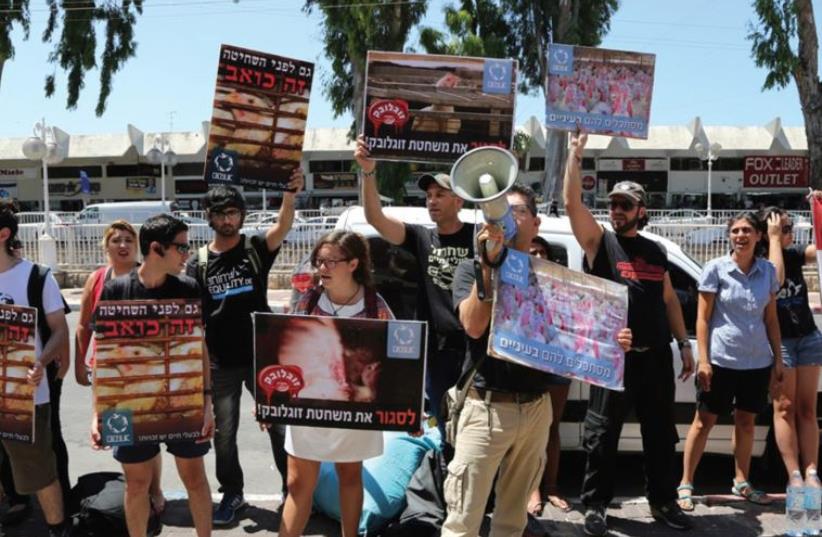 ACTIVISTS DEMONSTRATE against animal abuse outside the Soglowek poultry slaughterhouse in the North.
(photo credit: HILA OZ)
Advertisement
Agriculture Minister Uri Ariel called on Wednesday night for the immediate installation of cameras in all slaughterhouses as well as the establishment of a central control room to monitor activities, following recently exposed cases of animal abuse.Aiming to increase the enforcement activity of the Animal Welfare Law at such facilities, Ariel instructed the ministry’s Veterinary Services director, Dr. Nadav Galon, to oversee the swift integration of these systems. The decision occurred two days after a Channel 10 report revealed abusive activities taking place at the Soglowek poultry abattoir in northern Israel, which prompted the minister to shut down the site’s operations that same evening.“I request that you act immediately to instruct all slaughterhouses across the country to install a camera system according to the professional requirements of Veterinary Services,” Ariel wrote to Galon. “Also, I would ask that you submit to me within a month a work program and a budget proposal for the establishment of a central control room that will be connected to the camera system for continuous surveillance, which will be operated by an external company or alternatively by a network of volunteers under the supervision of Veterinary Services.”Only after Galon has submitted the work and budget proposal will the ministry be able to provide estimated costs for the project, a spokesman for Ariel said.Earlier on Wednesday, Ariel had responded to urgent questions in the Knesset plenary regarding animal rights and the Soglowek case that was exposed on Monday night.The continuation of a Channel 10 Kolbotek investigation in October 2013, prompted by Anonymous for Animal Rights activist Ronen Bar, Monday’s program showed images of employees dancing in circles with chickens and throwing them around to each other as if they were balls. After the program aired, Ariel announced that he was shutting down operations until proper infrastructure was installed to enable necessary supervision, adding that he has “zero tolerance for such events.”In response to the Channel 10 investigation, Soglowek said on its Facebook page that the company, for the past two years, has invested hundreds of thousands of shekels in 24-hour cameras and in training management to prevent “exceptional and non-standard acts in slaughter.”“At Soglowek we are working around the clock so that such unfortunate incidents will not occur and we are sorry that despite everything these mishaps occur,” the statement said.“In terms of management, such behavior does not reflect the spirit of the company. Soglowek management is doing everything so that such things will not happen.”At the Knesset on Wednesday, the minister once again emphasized this point, also describing how the ministry has already undergone significant changes in attitude since previous administrations. Ariel stressed that even animals who have no owners, but are in distress, merit human attention, and he pledged to strengthen enforcement action against abusers.“I will operate with zero tolerance regarding the subject of animal welfare, and against those who perform acts that should not occur from either a Jewish perspective or from the perspective of the laws of the State of Israel,” he said.In response to the events and announcements of the past few days, an Anonymous for Animal Rights spokeswoman said that the minister’s words “are certainly a step in the right direction,” and that the organization plans to follow up closely with the implementation of his plans. “There is a great importance in providing access to images to animal rights organization representatives,” she said.While in-house camera installations are already required at mammal slaughterhouses, today only the company veterinarians watch the material recorded, if at all, even though regulations require at least five minutes of viewing and the provision of access to Veterinary Services, the spokeswoman explained.Meanwhile, the current regulations do not force the facilities to install the cameras in the specific area where slaughter occurs, due to objections from facility owners, she added.“The investigation into Dabbah showed that current regulations are not enough,” the spokeswoman said. “One cannot expect slaughterhouses to monitor themselves, and the supervision of the Agriculture Ministry, so far, was far from adequate. It is therefore essential that the cameras transmit to the Veterinary Services headquarters and that authorized inspectors and organization representatives view the images and act accordingly.”Anonymous for Animal Rights, along with Let Animals Live and other organizations, have long been arguing that the authority over the Animal Welfare Law should be transferred from the Agriculture Ministry to the Environmental Protection Ministry. Asked whether this stance has changed due to Ariel’s steps forward, the Anonymous for Animal Rights spokeswoman stressed that the conflict of interest posed by the Agriculture Ministry’s authority over the law is a “structural problem and not a personal one.”“On the one hand it is his role to protect animals, and on the other hand he represents the interests of the industries that take advantage of them,” she said. “We welcome the new wind that is blowing in the Agriculture Ministry and hope to be surprised for the better.”