"The cattle were unloaded from the vessel and the import shipment was canceled." 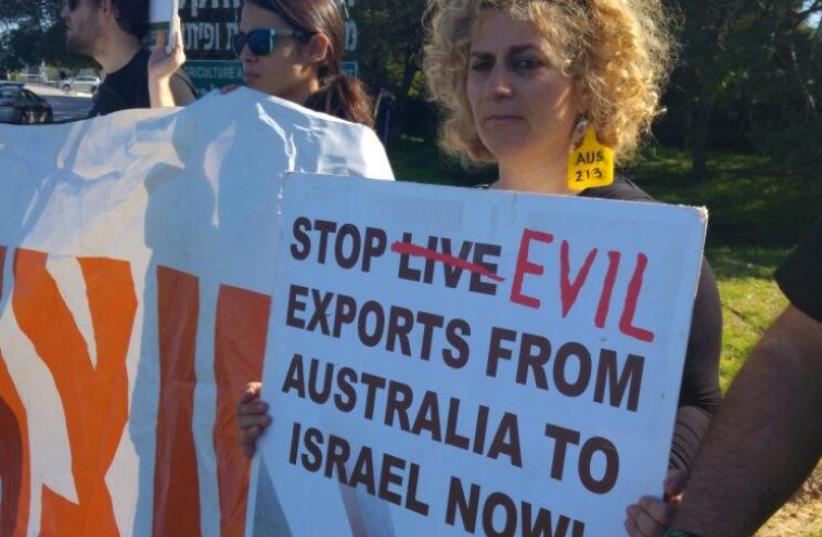 Israel Against Live Transports rally in Beit Dagan
(photo credit: ISRAEL AGAINST LIVE TRANSPORTS)
Advertisement
After a weeklong engine failure left some 13,000 cattle and sheep stranded aboard an Australian vessel bound for Israel, the Agriculture Ministry heeded calls from animal rights activists on Wednesday to abort the shipment in question.The MV Ocean Outback, which departed from the Western Australia port of Fremantle last Tuesday, has been docked in the city of Henderson since Thursday, Australia’s ABC News reported. The animals were destined for the Dabbah slaughterhouse in Deir el-Asad, near Karmiel, a facility that faced temporary closure in June due to animal welfare violations.With the sheep and cattle still packed on the docked ship, animal rights activists in both Australia and Israel have expressed their concern about the circumstances, stressing that animals stuck in such conditions face prolonged suffering.On Wednesday evening, the ministry announced that the shipment was, in fact, being aborted.“Following the intervention of the agriculture minister, talks were conducted between the Israeli and Australian veterinary services,” a statement from the ministry said. “According to what was agreed upon, the cattle were unloaded from the vessel and the import shipment was canceled.”Earlier that day, Anonymous for Animal Rights and Let Animals Live sent a letter to Agriculture Minister Uri Ariel and Veterinary Services director Dr. Nadav Galon, requesting that they revoke the import permit for this ship, in order to curb the suffering of the animals aboard.On Tuesday, temperatures in the area rose to 34° Celsius, and by Thursday they were expected to climb to 37°, the activists wrote. They expressed their concern that the situation could result in the mass death of the animals, due to the heat, the overcrowding and potential ventilation problems aboard the ship.After also sending a letter to Ariel on Wednesday, members of the organization Israel Against Live Transports staged a protest in front of the ministry’s Beit Dagan headquarters that day. The demonstrators came equipped with a large model of a ship filled to capacity with cattle and sheep.“It’s something that sounds like a fictional horror movie,” said Yael Gabay, the leader of the group’s campaign. “These shipments are constantly harsh, and we are turning to the agriculture minister to appeal to the mercy of his heart and the Torah of Israel.”Despite the complaints from animal rights activists, executives at both Wellard, the ship’s operator, and Otway Livestock Exports, which chartered the ship, told ABC News that the animals faced no danger aboard the vessel. Alan Schmidt, managing director of Otway Livestock Exports, stressed that the animals had additional sawdust underneath them and were out of the sun, according to the ABC report.In addition to stressing the gravity of this specific case, Anonymous for Animal Rights and Let Animals Live demanded that ministry officials suspend live shipments from Australia in general and carry out a comprehensive investigation on the effects of failures of this kind. This is the fifth such incident in the past two years, and in 2014, 1,700 sheep and 165 cattle died aboard the Ocean Drover ship en route to Israel and Jordan, the organizations said.About a month ago, the groups filed a petition to the High Court of Justice, likewise demanding a ban on live shipments.On Wednesday night, Anonymous for Animal Rights and Let Animals Live praised the agriculture minister’s decision to stop the import and thereby “save 13,000 animals from a painful journey that would likely be significantly extended due to the engine failure on the ship.“We hope that the permit is not renewed, and that the cancellation will remain in place, and call upon Minister Uri Ariel to prohibit all live shipments,” the groups said.“Transporting animals across continents and oceans in a crowded belly of a ship is unnecessary abuse, which is contradictory to the Animal Welfare Law.”