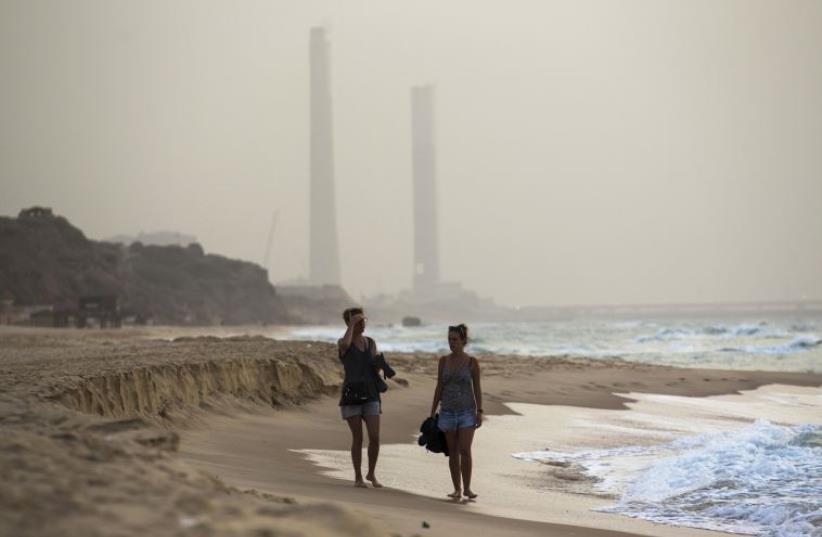 Tourists walk at the shore of the Mediterranean sea in Ashkelon in southern Israel during heavy hazy weather in the region
(photo credit: REUTERS)
Advertisement
After a hazy Tuesday and Wednesday, the Environmental Protection Ministry warned on Thursday morning that air pollution levels still remained high. Although significantly lower than the day before, levels of PM 10 – particulate matter with a diameter of 10 microns or less – at around 9 a.m. were still up to nine times typical daily values in some locations, according to ministry monitoring station data. The dust storm, which began in Israel on Tuesday, was the result of strong southeasterly winds transporting dust from Saudi Arabia and Jordan. Although such hazy conditions occur much more frequently in the winter and spring – and originate during those seasons from the southwest – a Red Sea trough with strong and continuous easterly winds can result in the less common autumn dust storms, Dr. Amos Porat, head of the Climate Department at the Israel Meteorological Service, said on Wednesday. A meteorological trough features low atmospheric pressure, as opposed to a ridge, which features high atmospheric pressure.While autumn haze events are less common, they tend to occur once every few years, with past recent storms happening in 2002, 1997 and 1991, Porat explained.Maximum levels of dust peaked at different times on Tuesday and Wednesday depending on the location, with the highest PM10 amount measured at Tel Aviv University's Yad Avner station at 5 p.m. on Wednesday – 4,207 micrograms per cubic meter, 70 times typical daily values. On a routine non-stormy day, levels of PM10 are around 60 micrograms per cubic meter, according to the ministry.At 9 a.m. on Thursday, PM10 levels were still 567 micrograms per cubic meter in Beit Shemesh, 535 micrograms per cubic meter in Givatayim, 498 micrograms per cubic meter in Arad, 468 micrograms per cubic meter in Rehovot and 428 micrograms per cubic meter in Jerusalem, the ministry data said. While a significant improvement in air quality was expected for the afternoon and evening, the Environment Ministry still advised that sensitive population members, including those with heart and lung conditions, the elderly, children and pregnant women, continue to refrain from strenuous physical activity.Due to low visibility on Thursday morning, the Israel Airports Authority closed down the Eilat Airport, rerouting flights to and from the southern area to the nearby Ovda Airport. The airport was reopened on Thursday just before noon.