The Vienna-based Four Paws International, which has long described the Khan Younis Zoo as the worst in the world, rescued the animals from desolate conditions last Wednesday. 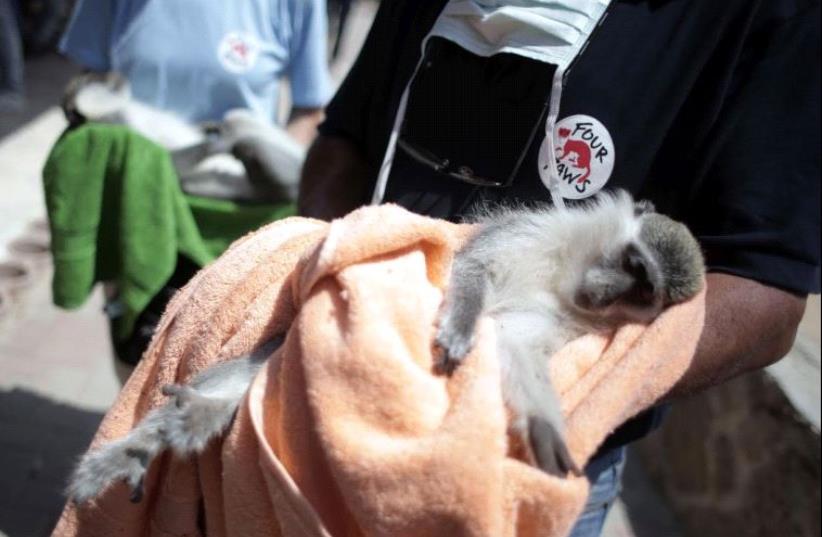 FOUR PAWS actions in Gaza.
(photo credit: FOUR PAWS)
Advertisement
Following a successful cross-border mission from Gaza to Israel last week, the 15 former inhabitants of “the worst zoo in the world” have reached their new homes in Israel, Jordan and South Africa. The Vienna-based Four Paws International, which has long described the Khan Yunis Zoo as the worst in the world, rescued the animals from desolate conditions last Wednesday, working together with Israeli and Palestinian Authorities. All of the animals – Laziz the tiger, five monkeys, one emu, one pelican, one deer, two porcupines, two long-legged buzzards and two turtles – are now safe at their final destinations and receiving species-appropriate care, the organization said.The five monkeys, which were the first to be released, are now residing in the quarantine section of the Ben Shemen Monkey Park’s sanctuary in Israel, according to a statement from Four Paws. Shortly after the transfer of the monkeys, the rest of the animals, except for Laziz the tiger, arrived at their new home in Jordan’s New Hope Center – part of the Al Ma’wa for Nature and Wildlife sanctuary, run jointly by Four Paws and the Princess Alia Foundation.The last animal to arrive at his destination was Laziz, who is now in his adaptation enclosure at the Four Paws Big Cat Sanctuary in Lionsrock, South Africa, the statement said.“Laziz remained surprisingly relaxed during the whole transfer as well as his release,” said Ioana Dungler, director of the Wild Animals Department at Four Paws, who accompanied Laziz on his entire journey.“There was an unintentionally hilarious moment when he tried to get out of his box with his backside first. This didn’t really work out, but finally he managed his first step on the new terrain. He needed a moment, then he started to sniff about and explore his new home.”While Four Paws conducted last week’s rescue operation, the transfer of the animals was made possible through the collaborative work of Israeli and Palestinian bodies: the Coordination of Government Activities in the Territories (COGAT), the Coordination and Liaison Administration to the Gaza Strip (CLA) and the Defense Ministry’s Crossings Authority from the Israeli side, along with the Palestinian Agriculture Ministry.“We are so happy that all animals have made it safely to their new homes,” Dungler said.“We were supported so much by everyone involved and are really thankful for that. A rescue mission of this extent would not have been possible without it.”