Lawsuit demands that the train company pay NIS 1,500 per resident, which amounts to NIS 20 million. 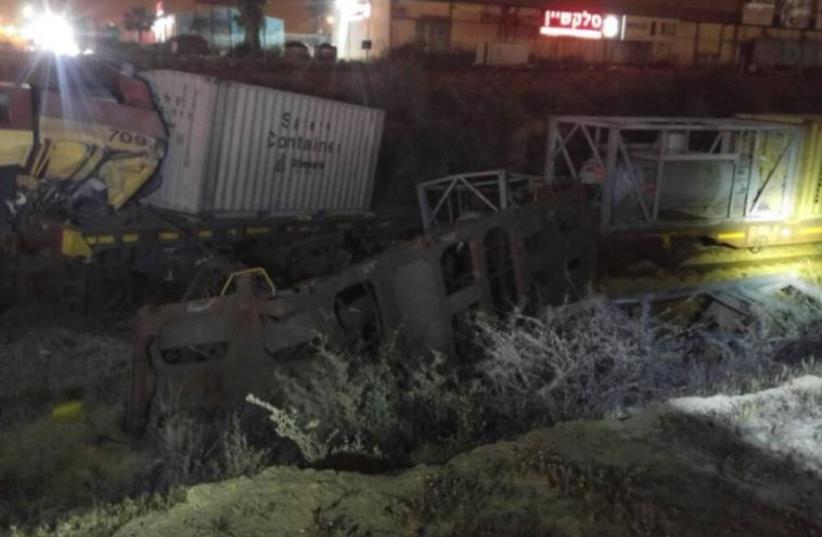 Scene of train collision in Dimona
(photo credit: FIRE AND RESCUE SERVICE)
Advertisement
On Tuesday, a class action lawsuit was filed against Israel Railways in the name of Dimona-area residents who claim they have suffered emotional injury as a result of a March 14 train crash that caused 6.5 tons of bromine to spill.The lawsuit, filed by the NGO Citizens for the Environment in the name of the residents of Dimona and the surrounding area, demands that the train company pay NIS 1,500 per resident, which amounts to NIS 20 million.Lead plaintiff Abigail Biton, represented by lawyers Amir Yisraeli and Jamila Hardal Wakim from Citizens for the Environment’s legal team, claims in the suit that the crash caused emotional damage through anxiety and fear to all people in the area. Furthermore, she says that residents are still worried about another crash.Wakim said the lawsuit’s aim was to require Israel Railways to take all steps needed to prevent any future accidents, as well as to compensate residents.The Environmental Protection Ministry announced on Tuesday that it had begun a criminal investigation against Israel Railways and its management, saying the company may have violated the Clean Air Act as well as the Hazardous Substance Act due to high concentrations of bromine that were found in the air. According to a statement, Israel Railways has 48 hours to provide its short-term plan on how the company will improve security procedures for transporting harmful materials.According to Amos Notea, one of the plaintiffs in the lawsuit, British air quality standards say that exposure of 0.01 parts per million of bromine for the span of one hour requires protective gear.He cited the Environmental Protection Ministry, which reportedly said the bromine concentration in the air on March 16, 48 hours after the crash, stood at 3 ppm.